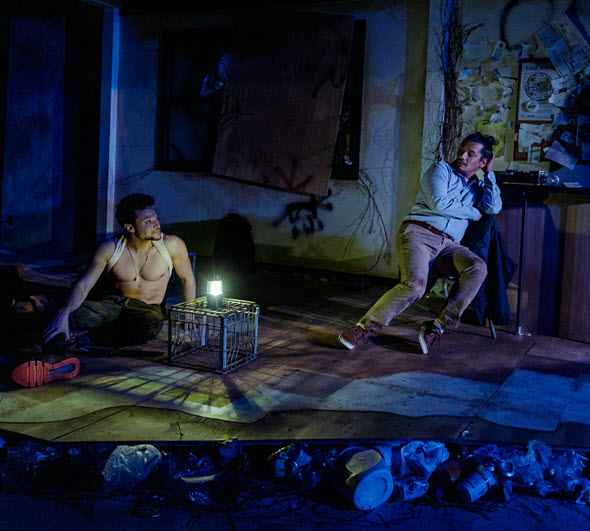 Miguel and his brother Julio are in a bad place, two Latinos on a desperate run from pursuers who want to catch them before they can make it across the border to Mexico and safety. The hunters on their trail may be federal agents, or they could be hired guns, or perhaps even white vigilantes out to expunge the countryside of any and all Latinos. That part is not entirely clear in Exal Iraheta’s gripping play “Last Hermanos.” It really doesn’t matter. Somebody is closing in on the brothers, and their flight has stalled.
“Last Hermanos” (or last brothers) is a harrowing, frenetic but also doggedly slow-motion drama of neutralizing circumstance where speech largely supplants action – an existential shut-down tableau: “Waiting for Godot” meets “No Exit.” The young Chicago-based playwright Iraheta, a product of both Northwestern University and the School of the Art Institute of Chicago, has created a charged, smartly focused drama with taut, credible dialogue that’s at once expansive and efficient. And he is very well served here by an engaged trio of actors. 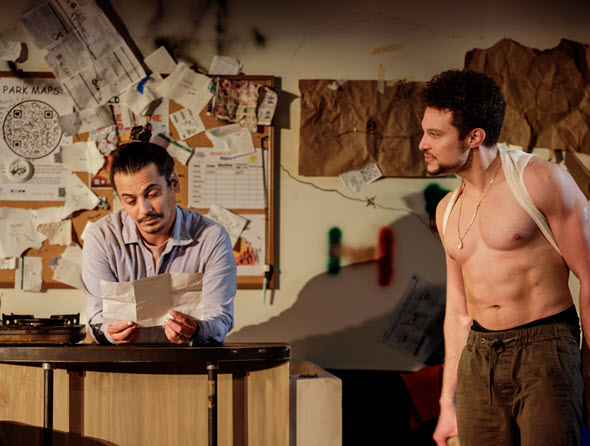 Level-headed Miguel tries to calm his hot-headed brother while they wait to cross into Mexico.

Older brother Miguel, an accomplished academic, is also a patient optimist, and he’s sticking to the game plan that has brought them to this isolated pick-up point, maybe once a bus stop. It’s a bleak scene strewn with empty cans and bottles bounded on the backside by a wall covered with scrawled notes from other prey who have preceded them. Younger Julio is a hot-headed, impulsive, defiant revolutionary type. He packs the pair’s only weapon, a formidable knife that he’s more than ready to use on any and all comers. 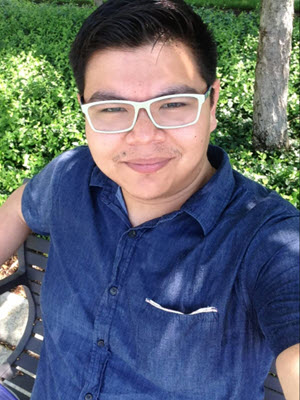 If Miguel, played with weary hope by Esteban Andres Cruz, holds our sympathy, it is Roberto Jay’s petulant Julio who commands our eye and keeps our nerves on edge. This crazy kid could get them both killed. Or maybe his crash-through-walls approach to their dilemma could get them rolling again. Julio knows about a band of militant Latinos they could join, and he insists he could lead them to their friendly midst. But Miguel isn’t buying that perilous option; their present situation is not good, but the better course is to wait for the promised ride.

While they wrangle, the two brothers also reveal a great deal about themselves. Miguel is gay, and he’s in a serious relationship with a white guy. When their parents split, Miguel, the sensitive one, went with their mother; Julio became the father’s responsibility. So the boys grew up with different perspectives on the world: Miguel as a worrisome intellectual, Julio as a clear-eyed fighter. This run for the border was Miguel’s idea, but Julio agreed to come along, he says, to protect his big brother. We also see that, beneath the outbursts of temper, the brotherly love between them is genuine, and it is deep.
Their predicament only turns more dicey when Miguel, briefly separated from Julio, encounters a lone white guy, Shepherd. Although Shepherd is packing a pistol, he says he doesn’t mean any harm: He has a wife and child encamped just up the river and he, too, is looking for a way out of this remote area. Shepherd’s story sounds plausible enough to Miguel, but not to Julio, who smells a rat in this interloper. 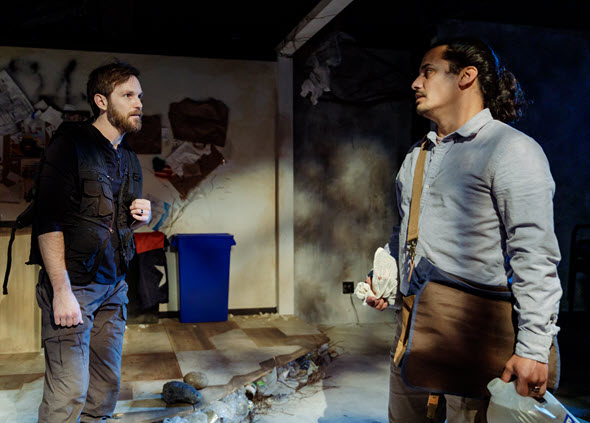 Shepherd (Chris Sheard) arrives on the scene uninvited, evasive, and packing a weapon.

Chris Sheard’s portrayal puts Shepherd in a perfect gray zone between anxious honesty and calculating duplicity. Shepherd even gets an easy chance to eliminate Julio, but lets him go. At the same time, that encounter also establishes Shepherd as a skilled and dangerous fighter. Is he ex-military? Maybe even current military? Either way, he could be point man for the hunters.

Meanwhile, the escape window appears to be closing for Miguel and Julio. By whatever means or direction, they must move. But Shepherd and Julio aren’t finished with each other, and their next collision has quite a different outcome. Violence flares, begetting greater violence, as inevitable and paradoxical as it is ruinous. There has been some hearty laughter between these loving brothers, but now the comedy is finished. The play’s last image, lit up in the glare of headlights, is a Pietà.