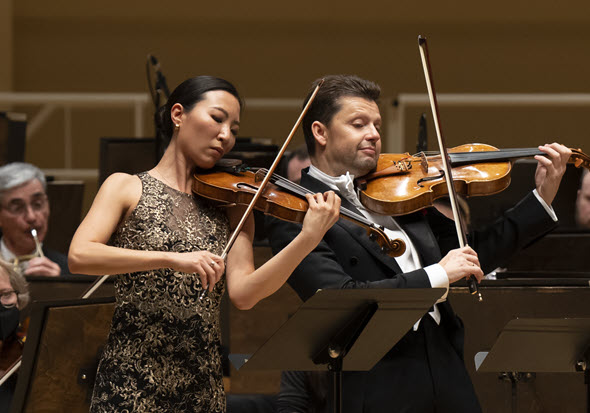 It felt very much like Old Home Weekend at Orchestra Hall when violinist Stephanie Jeong, associate concertmaster of the Chicago Symphony Orchestra, stepped into the spotlight for three concerts, then ceded center stage to one of the world’s preeminent pianists, Yevgeny Kissin, who has become not just a Chicago favorite but something closer to an adopted son.

Jeong’s star turn came as the fiddle half of Mozart’s Sinfonia Concertante for Violin and Viola in E-flat, K. 364, with the multitalented Julian Rachlin as violist. If not quite a one-man band, Rachlin still filled sundry roles here as violist, violinist and conductor. Besides doubling with Jeong while leading the Mozart concerto, he also sported two hats as conductor and violinist in a swatch of Tchaikovsky and then focused on just conducting works by Beethoven and Mozart to bookend his program. 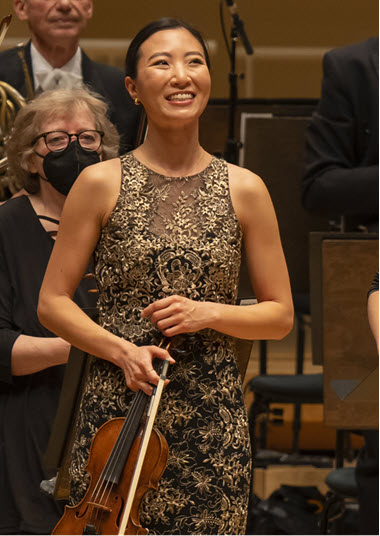 Jeong, not in her usual black, took a Mozartian solo turn. (Rosenberg)

For nearly 15 years, I’ve listened to Stephanie Jeong perform in various settings: sitting in occasionally for CSO concertmaster Robert Chen as what the Brits call leader of the orchestra, stepping out as soloist with the orchestra and playing with small ensembles or simply on her own. Her beautiful performance in the Mozart double concerto was only typical of a violinist who possesses consummate technique, unfailing musical intelligence and profound artistic sensibilities.

The Sinfonia Concertante, fashioned in the usual three movements of a Classical concerto, is the remarkable work of a composer at age 23 – an evolving dialogue between violin and viola that progresses from the ballad-like narrative of the first movement through a radiant intertwining of voices in the Andante to a fiery Presto finish that even in its flight never loses its elegant poise. The two soloists made an excellent match, Rachlin’s throaty and lustrous viola sounded complemented by Jeong’s vibrant and incisive violin. Along the way, both musicians made bravura work of solo episodes as well as duo cadenzas: Rachlin as master of the viola’s distinctive mezzo-soprano charms and Jeong as a violinist fine-tuned to the lyrical lines of Mozart.

Taken as a whole, the program was a bit of a patchwork. Rachlin opened each half with a very small patch: Beethoven’s Overture to the ballet “The Creatures of Prometheus,” which flares and vanishes almost before you’re aware, and Glazounov’s arrangement of the Meditation from Tchaikovskiy’s “Souvenir d’un lieu cher” (Remembrance of a beloved place), a silken six minutes for solo violin and orchestra.

Rachlin’s most ambitious conducting came last with Mozart’s Symphony No. 36 in C major (“Linz”). It was a stylish account that left one wishing Rachlin had opened each half with a Mozart opera overture and skipped the rest.

Mozart was also a big part of the Evgeny Kissin recital May 15 – that is, the whole of his recital, not just the printed program. While Kissin always indulges his audiences with generous encores, in this case the first three effectively amounted to another program chunk and the fourth was, well, an encore to the encores. His recital must be considered in that entirety. 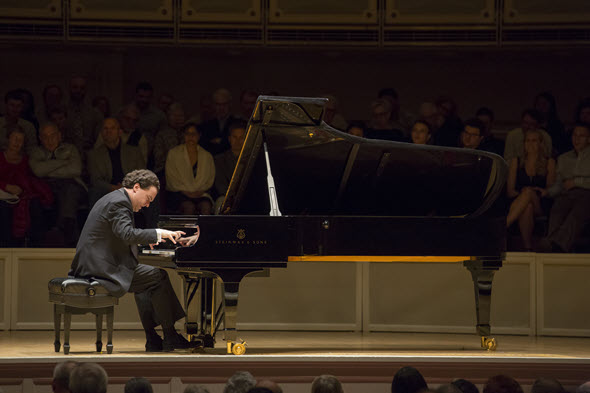 Packed houses are the rule when Kissin comes to Orchestra Hall. (Rosenberg, 2015)

Bach opened both the printed program and what I might call the recital’s epilogue – and in equal portions. First came the 19th-century pianist Carl Tausig’s flamboyant arrangement of the Toccata and Fugue in D minor, BWV 565. Tausig, who died at age 29, was a prize pupil of Liszt. His prodigiously pianistic working-over of Bach’s famous organ piece could have been from Liszt’s own hand. Kissin stormed through it, a sort of wake-up curtain-raiser. The later, and far greater, Bach arrangement was the encore of Busoni’s piano setting of the chorale prelude “Nun komm, der Heiden Heiland,” a solemn and spacious meditation that positively radiated in Kissin’s reflective, luminous playing.

In something like reverse perspective, Mozart also was mirrored in the printed program and as an encore: Right after Tausig’s noisy take on Bach, Kissin turned to Mozart’s ruminative Adagio in B minor, K. 540, imbuing it with wondrous warmth and depth. its encore opposite was the Rondo in D major, K. 485, Mozart at his most brilliant and inventive, Kissin at peak effervescence. 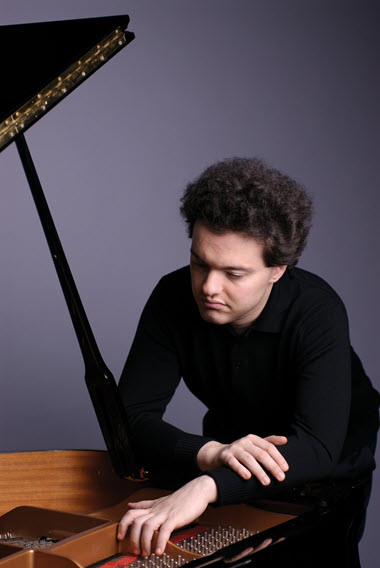 Kissin: In the midst of it all, a massive Beethoven sonata. (S. Gusov)

Chopin also figured into this program-encore scheme. Kissin’s second half was all Chopin, starting with a beguiling series of seven Mazurkas, each of which felt like a miniature ballade and each explored to its characteristic core by this pianist of consummate poetry and limitless means. These Kissin followed with a grand turn through the Andante spianato and Grande Polonaise Brillante. But the best was to come amid those encores: nothing less than the Polonaise in A-flat, Op. 53, known as the “Heroic,” and Kissin’s magnificent performance – all liquid fire and lighting speed – offered ample reason why.

An encore, mind you. And the third such, to which Kissin added an encore-size encore: a graceful whirl through Chopin’s Waltz in F minor, Op. 70, No. 2.

But even all that was not the sum of Kissin’s heady afternoon. He didn’t reserve the best for last, but I have: Beethoven’s Sonata No. 31 in A-flat, Op. 110. In a sense, Kissin just put this monumental work out there in the midst of everything else. Amazing. One can perhaps read in the tempo marking of the opening movement how much this music meant to a composer who could no longer hear, except in his own imagination: Moderato cantabile molto espressivo. And so it flowed from Kissin, then into a scintillating Scherzo and finally a transcendent Adagio that gave way to a crowning fugue, its rigor matched by the clarity and eloquence of Kissin’s performance.

it wasn’t so much an ovation that came after, but an affirmation. A roar. One that would be heard again and again, straight through those stunning encores. Kissin, this great pianist and adopted Chicagoan, was back in the house. The house was full. And everyone knew why.