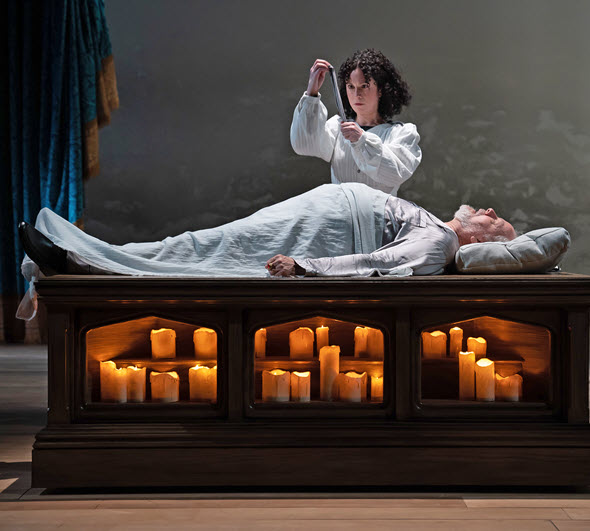 Review: “All’s Well That Ends Well” by William Shakespeare, at Chicago Shakespeare Theater through May 29. ★★★★

‘Tis neither fish nor fowl, Shakespeare’s comical-radical and highly problematical play “All’s Well That Ends Well.” Like its main characters, the plot is tormented. Small wonder “All’s Well” has been lumped together with “Measure for Measure,” “Timon of Athens,” “The Merchant of Venice” and a couple of others as “problem” plays. When the rhetorical dust settles and the curtain falls, we’re not quite sure what to feel. But Chicago Shakespeare’s production of “All’s Well” goes a long way toward focusing our ultimate reaction by sharpening the comedy. 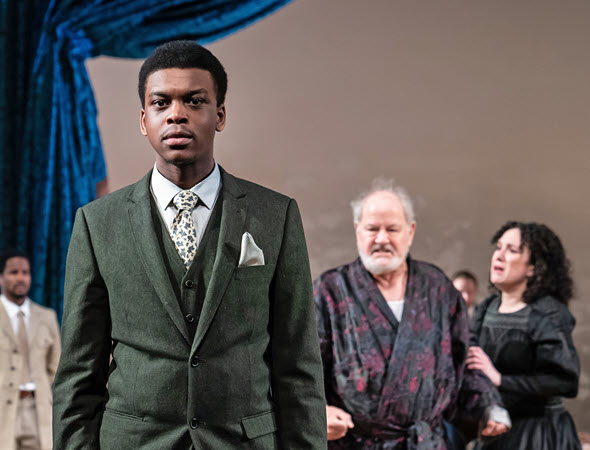 Bertram (Dante Jemmott) pushes back against the King’s command to marry.

The gist of “All’s Well That Ends Well” is that young Helen, a commoner whose late father was a famous doctor, has her hat set for Bertram, a strapping young nobleman whose mother, the Countess of Rossillion, has taken Helen under her wing and into her household. As the play opens, Bertram is off to the high life at the French court, and Helen is left behind to mope. But the enterprising lass soon hits upon a scheme: The King is ill, and though none of his physicians has found a cure, Helen is in possession of an all-purpose potion devised by her father. She argues the King into submission by betting her life on his recovery, makes good on her promise and asks as payment – marriage to Bertram.

His restored Majesty readily consents and announces to the astonished youth, “Bertie, this is your new bride. Best wishes.” His options being none, Bertram takes Helen for better or worse but not to bed. He immediately informs his new wife that he will be her true husband when she wears a treasured ring now on his finger and carries his child; and with that, he summarily leaves the court with his pals for the wars in Italy. Helen, undaunted, contrives to capture the ring and conceive his child. Bertram and Helen end up back at the French court, where amid general consternation all is revealed and, in two lines of verse, Bertram comes fully around to the bonds and joys of marriage. 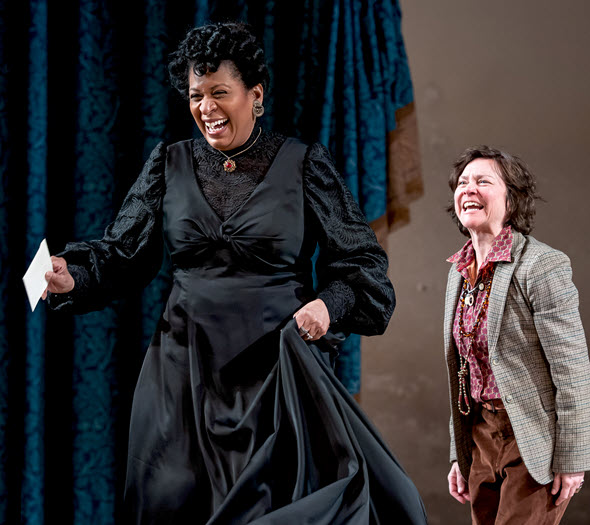 Amid the malaise of the times, the Countess of Rossillion (Ora Jones) and her clown (Elizabeth Ledo) find medicinal laughter.

Shakespeare apparently borrowed this froth of a tale from Boccaccio’s “The Decameron,” the 14th-century Italian counterpart to Chaucer’s “Canterbury Tales.” It’s a very silly story, about as plausible as the Bard’s own “Comedy of Errors.” And yet “All’s Well” endures, faithfully, valiantly restaged by determined directors generation after generation — for the good reasons of its many telling observations on human nature, its bountiful wit and its wealth of beautiful language.

Like orchestra conductors, stage directors make no sounds, but the crucial role they play is on full display here in Shana Cooper’s brisk and bawdy, insightful and indulgently funny concept, which allows Shakespeare’s text to resonate within designer Andrew Boyce’s sparse setting. CTS’ lucid account is a poster illustration for text-first Shakespeare. 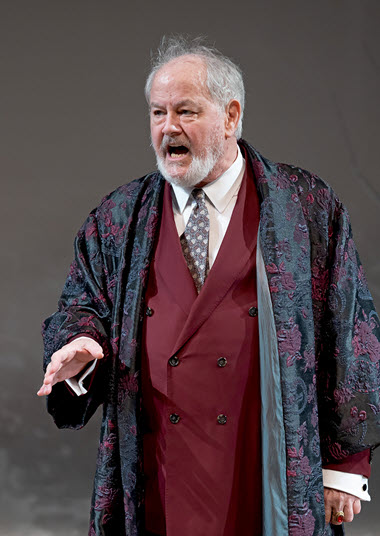 The King of France (Francis Guinan), recovered from his illness, leaves no doubt of his intention for Bertram.

Alejandra Escalante, a veteran of the Oregon Shakespeare Festival, makes her CST debut as Helen, and her many Shakespeare credits tell in her articulate, expressively contoured speech. Escalante imbues Helen with a fetching blend of spunk and sobriety, resolve and vulnerability. She commands the stage in Helen’s lamentation that Bertram despises the very ground she trods and that while she lives in France, France will hold nothing for him.

But Helen has a potentially second great speech, and the director comes halfway, but only halfway, to giving it to her fully: It is a letter in the form of a sonnet that Helen has written to the Countess, to the effect that Helen has withdrawn from the world into a life of celibacy. Basically, Helen is covering her tracks where in fact she has gone after Bertram. Shakespeare has a messenger read the letter, but I agree with Cooper that the lyrical missive should be in Helen’s own voice. Alas, we hear Helen from off-stage, in an amplified, booming voice-over whereas, in a fairly common convention, she could come front and center to speak this eloquent passage in absentia, as it were.

Bertram is surely one of the most thankless roles in Shakespeare. He’s not really a bad sort; he’s just been dealt a really bad hand. The fair Helen has played him quite unfairly. It’s a shotgun wedding in which he has no culpability whatsoever.  Dante Jemmott gives us a dazed, oblivious youth for whom this obligatory marriage falls somewhere between a bad dream and a speedbump. 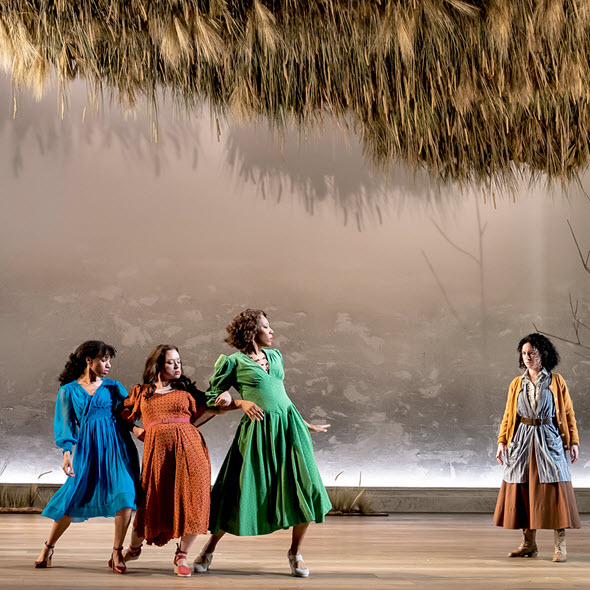 Yet the two kids at the center of the story are not its most fascinating, or indeed its most brilliant, characters. Shakespearean brilliance washes over a quintet that is more than merely supporting. As Bertram’s mother the Countess, Ora Jones Jones, in potent voice and splendid presence, offers a grand lady with a compassionate sensibility. Her every speech is a dramatic inflection point. To the well-seasoned courtier Lafeu, William Dick brings the essence of dutiful observance with an edge of dry wit. 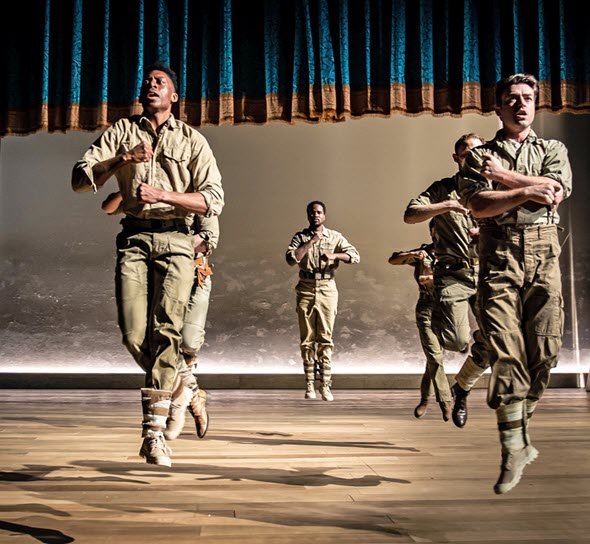 The soldiers’ synchronized drills serve as a reminder that just beyond the comedy there is a war.

Elizabeth Ledo nearly steals the show as the Countess’ fool — called clown in this play. Easily transcending the gender issue, Ledo displays an impeccable sense of comic timing punctuated by brash physicality. Francis Guinan, as the King of France, makes a marvelous swing from irrepressible petulance in his affliction to a recovered monarch spilling over with the abundance of life.  Which brings us to the Falstaff-like rascal, braggart and ne’er-do-well Parolles and Mark Bedard’s all-in performance: comic-at-large like Falstaff but not so large, guffaws without the guts, ample amusement without the amplitude.

This show has a “movement designer,” Stephanie Martinez, whose work is especially eye-catching and consequential in the military drills executed by Bertram and his fellow soldiers. Their precise turns and synchronized gestures brought to mind Scotland’s imposing Black Watch regiment, and the comparison gave the comedy sober pause. Nearby was real war happening. Then we would return to this other madness, the play itself.