When salesman’s wife confronts his mistress, comedy flashes – and then nobody’s laughing 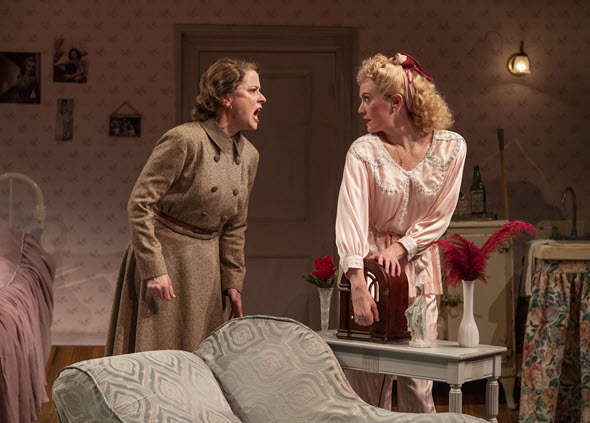 The Wife (Kate Fry) lashes out at The Mistress (Amanda Drinkall) for pursuing an affair that’s threatening her family. (Photos by Michael Brosilow)

Review: “Wife of a Salesman” by Eleanor Burgess, directed by Jo Bonney at Writers Theatre through April 3. ★★★

On its fragile surface, Eleanor Burgess’ “Wife of a Salesman” appears to be a clever and moderately provocative riff on Arthur Miller’s “Death of a Salesman.” It isn’t exactly a sequel to Miller’s play, but more of an interlude, a sort of off-stage, between scenes flight of fancy: What might have gone down if Willy Loman’s long-suffering wife had confronted some dame with whom he was consorting on his road trips?

For that matter, this might not be Willy Loman’s wife at all. Burgess simply calls her character The Wife. The “other woman” is The Mistress. And that’s it. Well, not quite. There’s one more character, which leads me to this: I can’t help thinking Burgess wrote “Wife” expressly to vex critics – just to see if they could deal with the play and its stunning wrinkle without ignoring that out-of-the-blue turn and yet also without spilling the beans. It’s a charming challenge. 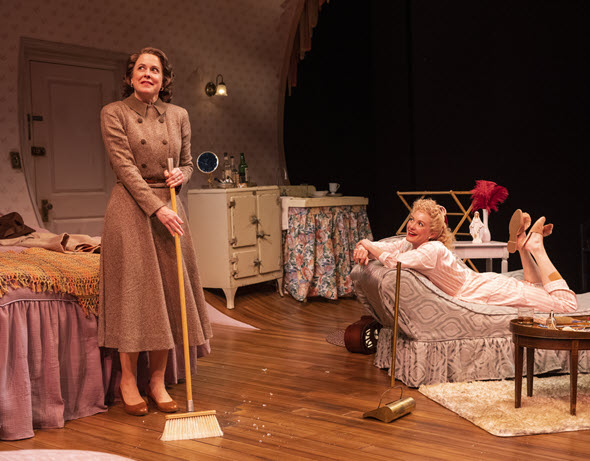 The Mistress (Drinkall) ignores the mess on the floor, so of course The Wife (Fry) cleans up.

Here’s the setup: It’s the 1950s and this blonde number is relaxing in her modest apartment, dressed in pink pajamas and listening to her favorite soap opera on the radio. I’ll cut through some details here. There’s a knock at the door. The blonde (Amanda Drinkall) opens it to find a notably frumpy middle-aged woman (Kate Fry) carrying a suitcase. She represents herself as a vendor of cloth materials. The blonde lets her in, but the jig is soon up and the sparring — only verbal at first — begins.

Round 1 is mostly a mutual sizing up and a good deal of self-justification. The blonde’s argument is simple: She’s beautiful, men fawn over her and she likes to have a good time. The frumpy visitor takes the moral high ground: This reckless, shameless woman is destroying her family. The Wife has sons who believe in their father. If they found out about his straying, well, it would be ruinous. The Mistress says it’s not her problem. 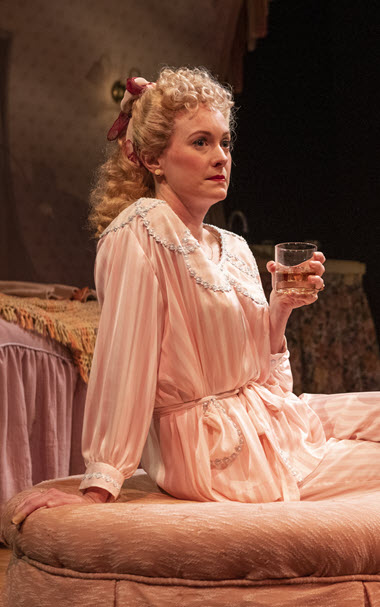 But as The Wife pushes her wifey moralizing and The Mistress pushes back, what looks at first blush like a spunky comedy starts to reveal deeper layers of character, and it’s in that revelatory process that the complementary performances of Fry and Drinkall begin to sparkle. The Mistress’ airy indifference to conventional morality is her shield against desperate loneliness. She’s never been married, never had kids. None of that deadly routine for her. Life without care — that’s what it’s all about. True, she’s maybe getting a little older. But the men still look. That can be tiresome in its way, though. Does anyone actually care about her as a person? The Mistress is about two steps — read: years — away from a midlife crisis.

As for The Wife, surely she doth protest too much. She lives for her man, her children. She is indispensable to them, and they give her life its profound and noble purpose. She is clearly and certainly loved. Or needed. But — and here Fry catches you by surprise — the grind, the expectation, the invisibility, it’s all exhausting, soul-bending, crushing. Watching this woman’s veil of pride disintegrate before us, and her with it, is breath-stopping. The unvarnished emotional truth Fry displays in this moment brings The Wife’s suppressed despair into line with Blanche’s willful delusion in “A Streetcar Named Desire.” And in a sense, like Blanche, The Wife ultimately retreats into her world of obsessive and necessary fantasy. 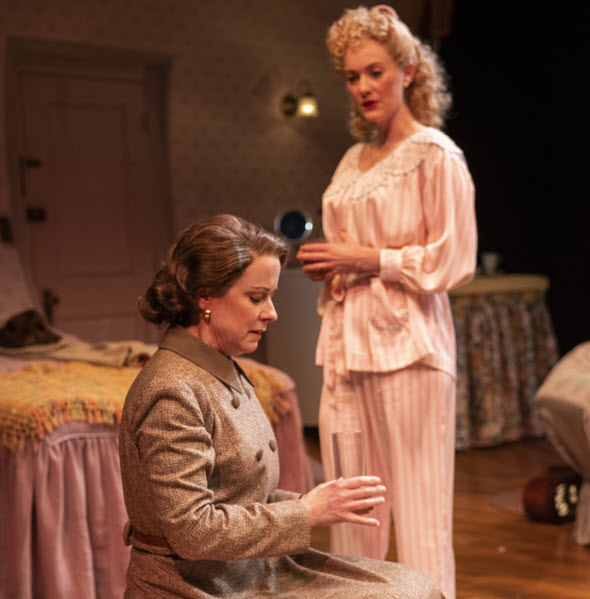 Is anybody actually happy? The combatants find some common ground.

For her part, the careening Mistress turns from surly and threatening to conciliatory. But it isn’t that simple. The play, the facedown, is not over. The last round ends in bare knuckles, in a full-count knockout. Comedy has been left far behind.

I mentioned a wrinkle and a reviewing challenge. There is a third character, called Jim (played with purposeful ambivalence by Rom Barkhordar). He is an interloper whose intrusions neither The Wife nor The Mistress can ignore. The play would be a better piece of work without Jim and his bits, which only belabor the proposition that it was ever thus — plus ça change and all that. Perhaps the playwright has been too clever for her own good. Still, I’d probably be curious about her parenthetical musing on “Streetcar,” should she decide to write one.