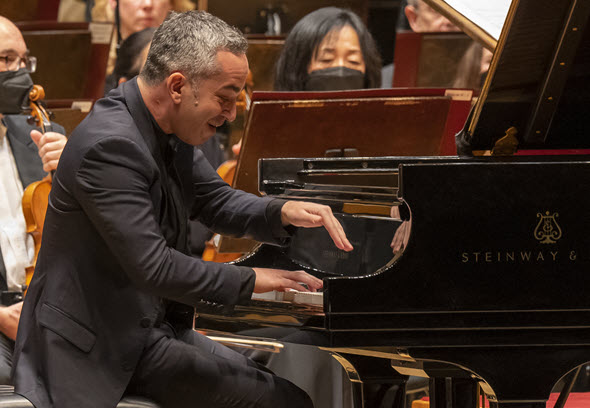 Reveling in fresh air while wearing a mask against the wrath of Omicron may seem like a paradox. But there’s really nothing else to be said about the Chicago Symphony Orchestra’s exhilarating concert of Gershwin and Ravel with conductor André de Ridder and pianist Inon Barnatan on Jan. 6 at Orchestra Hall. It was a delightful, delicious reminder of our human spirit and our collective determination to outlast the bug. This first CSO performance of 2022 was needed.

And it was great fun, thanks to the brilliance, wit and whole-hearted engagement of Barnatan as well as de Ridder’s stylish leadership and the all-in playing by the Chicago Symphony. 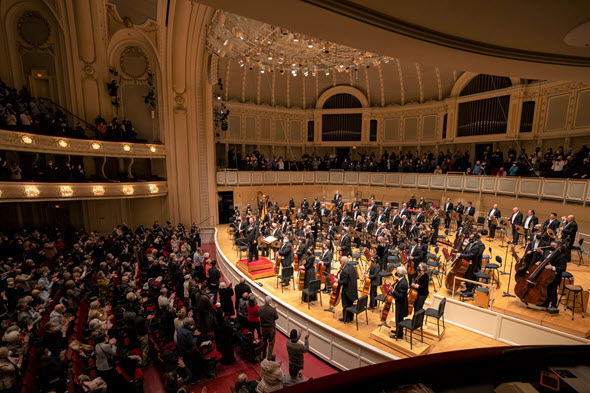 A large audience was on its feet for the Chicago Symphony and conductor André de Ritter.

Barnatan made four dazzling contributions, only two of which were in the printed program – Gershwin’s “Rhapsody in Blue” and Ravel’s Piano Concerto in G major. The Gershwin was a heady, jazzy riot, an infectious collaboration between the ever-aware German conductor and a pianist as daring as he was virtuosic. At the heart of Gershwin’s “Rhapsody” lie three big cadenza-like solos – fire-and-ice soliloquies – and in each of these remarkable flights of fancy Barnatan displayed both his limitless command of the keyboard and his keen sensitivity to the almost verbal inflection of the score. For its considerable part, the CSO delivered an edge-of-the-seat performance awash with the colors of Ferde Grofé’s vivid orchestration. 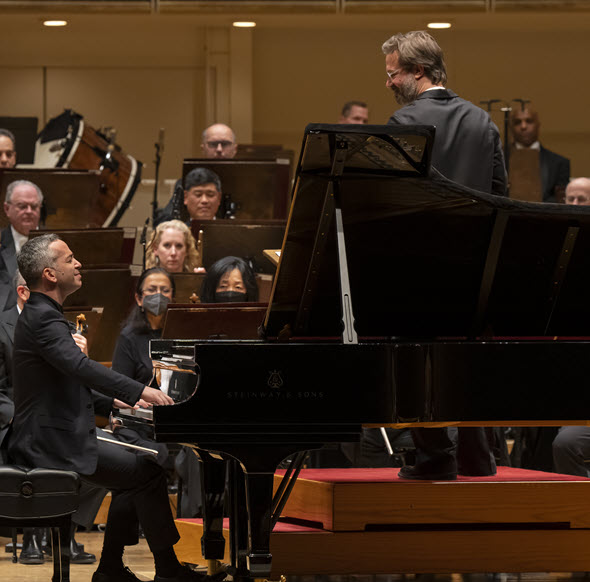 Barnatan and de Ridder collaborated in popular works by Gershwin and Ravel.

With Ravel’s concerto, famously edged with blue notes before sailing off into Gallic wit, Barnatan turned from the incisive rhythmic displacement and elastic phrasing of his Gershwin to a delivery ruled by airborne grace. Here, too, de Ridder and the orchestra provided fluent partnership, evoking Ravel’s elegant textures with unerring aplomb. The finale was a scintillating sprint, Baratan tossing off its glittering figurations and the orchestra painting a background canvas in the full palate of Ravel’s celebrated craftsmanship. 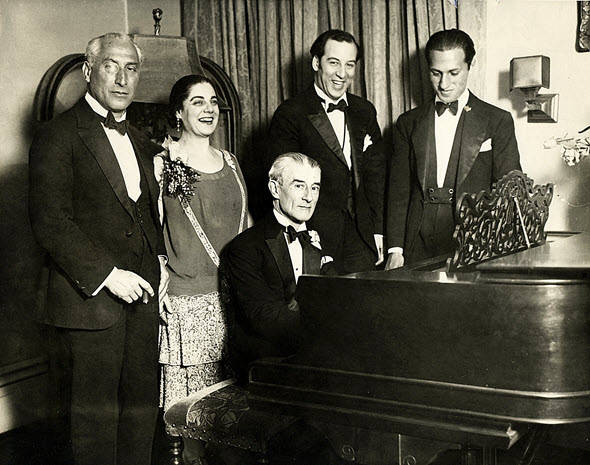 Gershwin, top right, at a birthday party for Maurice Ravel, seated, in 1928, the year “Boléro” was composed, and four years after the debut of “Rhapsody in Blue.” (Wikipedia)

So much for the programmed part of Barnatan’s night. Despite the whoops and cheers that descended on his “Rhapsody” performance, Barnatan sent the audience to intermission without an encore. But after the Ravel concerto, he reseated himself at the piano, calling out over his shoulder: “Ravel.” And together with concertmaster Robert Chen, Barnatan launched into the drollery of the slow movement from Ravel’s Sonata for Violin and Piano. This is not an incidental violin part, and Chen matched the pianist’s sly, almost roguish manner phrase by phrase. The crowd went wild. But Barnatan wasn’t finished.

I had hoped he might play Gershwin’s own variations on “I Got Rhythm.” While that didn’t exactly happen, Barnatan must have caught my vibe: He ripped into the great Gershwin interpreter Earl Wild’s “arrangement” of “I Got Rhythm,” a crazy-quilt rethinking of the piece all made of flying fingers and subtle wit. Barnatan probably could have played through the Gershwin songbook to the delight of that mesmerized audience. 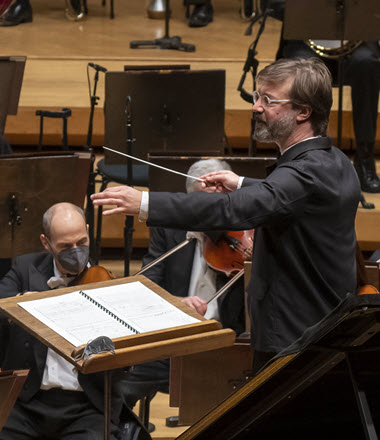 De Ritter made an impressive start with a “Porgy and Bess” suite.

But it was time to remove the piano and make way for the snare drum – and the implacable beat that propels Ravel’s “Boléro.” The snare and the CSO’s all-galaxy percussionist Cynthia Yeh were indeed positioned mid-orchestra, directly in front of the conductor for the long, long cresendo with its ever widening and deepening river of color that is “Boléro.” Perhaps the consummate exercise in sheer orchestral brilliance, Ravel’s virtuosic workout put every section of the Chicago Symphony on formidable display as de Ridder slowly, steadily constructed a sound that crested in cosmic finality.

The conductor, in his subscription concert debut, made an impressive start with the concert opener – “Porgy and Bess: A Symphonic Picture,” devised by Robert Russell Bennett in 1943 at the behest of Fritz Reiner a decade before he came to Chicago, when he was still music director of the Pittsburgh Symphony. This smart and imaginative pastiche pulls together the show’s greatest hits, clothing each tune in its own distinctive sound. De Ridder made serious, winning work of it, and the CSO served it up with a purpose – bright, flavorful, irresistible. It was going to be that kind of night.