‘Florencia en el Amazonas’ at Lyric Opera: Magic of a jungle river runs aground as drama 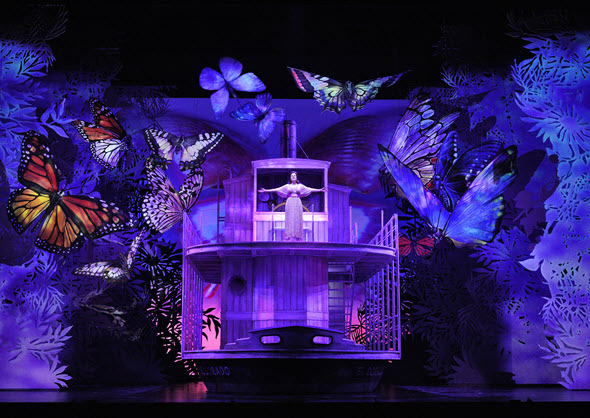 It is a fiesta of romantic opulence, a tumult of feverish emotions and strained perceptions, this excursion through the magical realism of Daniel Catán’s “Florencia en el Amazonas” at Lyric Opera of Chicago. The company’s first-ever Spanish-language opera is at once a delight for the eye and a curiosity, roundly entertaining if not squarely set in its dramatic frame.

The eminent Mexican composer Daniel Catán, who died in 2011 at age 62, was celebrated especially for his works for the opera stage, and “Florencia en el Amazonas” (Florencia in the Amazon) reflects his open-hearted embrace of the lyric ideal in the distinct tradition of Puccini. The musical score for “Florencia” (1996), written with great technical skill and a fine ear for expressive effect, speaks clearly of Catán’s affection for the likes of “La bohème” and “Turandot.” Moreover, this opera, set entirely on the epic and iconic Amazon River, also draws overtly and unself-consciously on Debussy’s “La mer.”

Librettist Marcela Fuentes-Berain, inspired by the magical realism of Colombian author Gabriel García Márquez (winner of the 1982 Nobel Prize for Literature), has fashioned a narrative that brings together seemingly random passengers on a steamboat headed deep into the jungle for the old Brazilian city of Manaus. They are united in hope of hearing the world famous opera diva Florencia Grimaldi. And she, traveling incognito, is among them. But the singer has an ulterior and more compelling reason for making the trip: a consuming wish to reconnect with her long-separated lover, whom she left to conquer the world’s opera stages – while he devoted himself to an exotic life of his own, as hunter of butterflies. 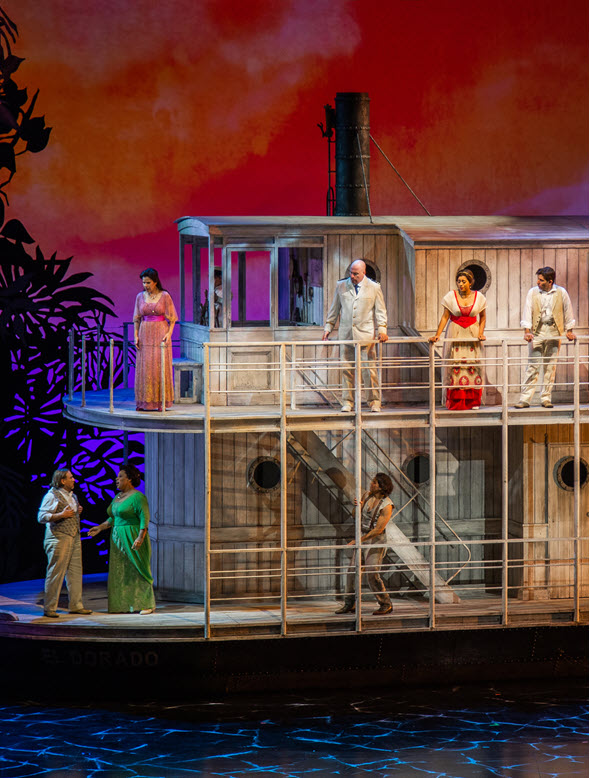 A motley complement of travelers float up the Amazon River in ‘Florencia.’

The ship’s company includes a middle-aged couple who squabble endlessly; a female journalist and Grimaldi devotee who’s writing a book about the reclusive diva and is determined to get an interview with her; a mysterious ship’s hand who holds a special connection to the jungle and this river; the vessel’s veteran captain, who loves his life upon the water, and his nephew, a sort of ne’er-do-well who’s bored with it all and imagines himself one day flying airplanes. Along the way, the boat and its contents are attended by five unseen water sprites, elusive and balletic embodiments of all that is wondrous and magical and dangerous about the long and undulating Amazon.

It is the visual prospect that first catches the eye and the imagination. Before the opera begins, the arriving audience finds itself drawn into an exotic, albeit cartoonish, setting – a jungle paradise complete with skittering creatures and drifting birds. The decorated scrim rises to reveal the set’s centerpiece, a marvelous steamboat that turns on Lyric’s grand carousel to permit action on the bow, both sides of the boat and the stern. Rolling mists at water level heighten the impression of movement, as do the graceful and expressive sprites. 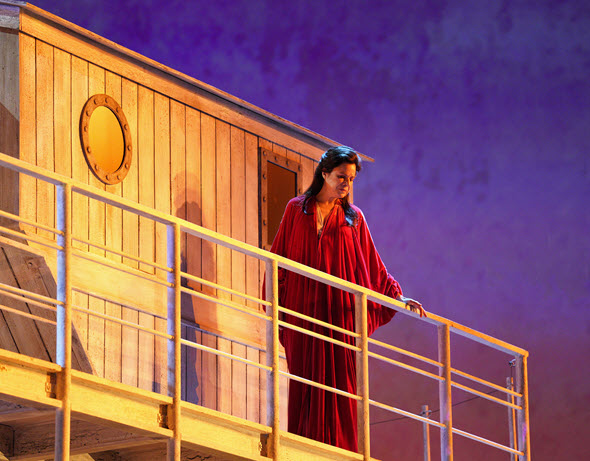 Heading a fine cast of singers, under the baton of Jordan de Souza and directed by Francesca Zambello, is the Lyric veteran soprano Ana María Martínez as Florencia. Making the most of a role somewhat more dramatically cogent than most here, Martínez brings a grand, warm sound and plausible wistfulness to this woman whose quest may be as much the retrieval of her lost youth as any fanciful reunion with her erstwhile lover. Statuesque and poised, Martínez is the quintessential diva – in aspect and voice alike. 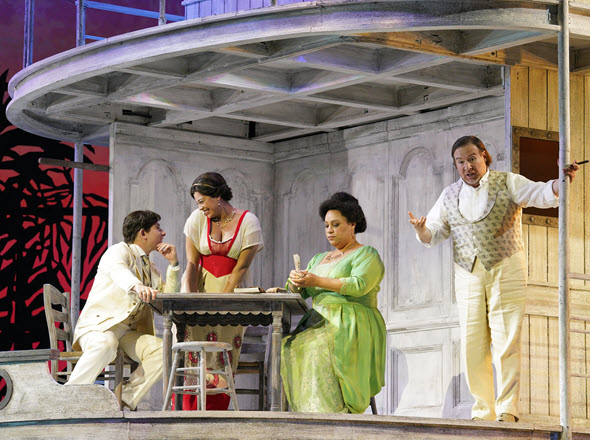 In an opera that could use a good peppering of humor, the contentious twosome of mezzo-soprano Deborah Nansteel and baritone Levi Hernandez as the marriage-worn Paula and Alvaro, add at least a pinch in a card game with their youthful opposites, reluctant lovers Rosalba the journalist (soprano Gabriella Reyes) and the captain’s drifting nephew Arcadio (tenor Mario Rojas). If this scene fraught with sharp emotional contrasts smacks of the third-act turmoil among Rodolfo and Mimi and Musetta and Marcello in “La bohème,” musically as well as conceptually, it’s nonetheless welcome in the midst of a cheerless tale of claustrophobic misery that comes to feel like Sartre’s “No Exit.”

Indeed, “Florencia” itself appears to lack an exit. The travelers arrive at their destination only to discover that the city is suffering under a plague. (How current!) They cannot disembark. Florencia despairs. She…ah, there’s the rub. She does what, exactly? She didn’t appear to do anything. Perhaps something imperceptible but magically realistic. She steps to the prow of the boat. I should not say more. I will only add that, in view of a spectacular fluttering in the opera’s last instant, I half expected the as-yet-unseen object of Florencia’s pursuit to rush in, crying out with Puccini-esque anguish: 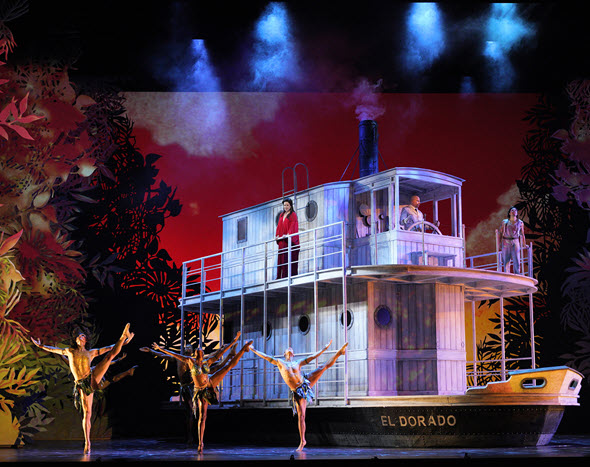 Balletic spririts of the Amazon accompany a steamboat on its journey along the river.