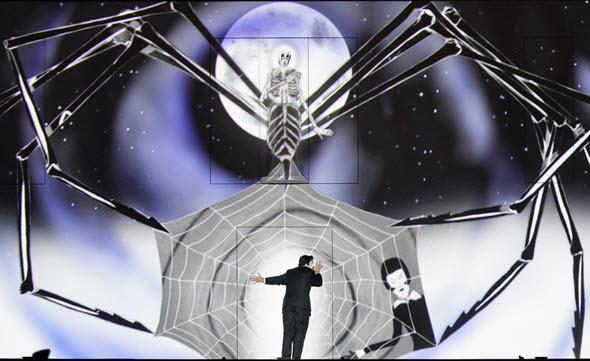 This “Magic Flute” is a giant movie screen with pop-out notches for singers. The face in the spider’s head is Lila Dufy, Queen of the Night. Pavel Petrov is Prince Tamino. (Photos: Cory Weaver)

For the third time this fall, Lyric Opera of Chicago has given its audience a production to talk about. Verdi’s take on Shakespeare’s “Macbeth,” Donizetti’s romantic comedy “The Elixir of Love” and now Mozart’s fairy tale “The Magic Flute” are no strangers to the opera docket. Yet this season at Lyric, with cleverness born of necessity, not one of these familiar shows has been given traditionally.

In unexpected styles, each has been serendipitously accoutered with nifty safeguards, should Covid linger. The bones of the shows changed very little from act to act. “Macbeth” was set entirely within the walls of an ancient Scottish chapel. “The Elixir of Love” played out on a bistro’s patio, among portable tables and chairs. One could easily imagine spreading fewer singers along the pews, or moving the patio tables farther apart, should greater prudence be required. (Even the quack doctor Dulcamara, that braggadocious peddler of “wondrous” elixir cure-alls, arrived well distanced, in a hot air balloon.) 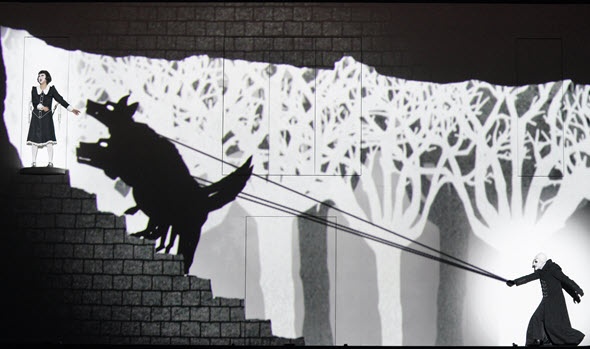 Pamina (Ying Fang) is loved by Tamino but on the run from bad guy Monostatos (Brenton Ryan).

Currently on the boards is “The Magic Flute” in a now famously brash Barrie Kosky/Suzanne Andrade production that has been around since 2013 and seen in Berlin, Paris, Los Angeles, New York and other capitals. It plays out against the facade of a great wall that acts like a silent movie screen, the camera’s flickering white light and all. Little windows and ledges in the wall pop open from time to time, allowing real singers to lean or step out to sing Mozart’s real music as they interact with wildly unreal cartoons of giant bugs, fairies, skeletons, even pink elephants – oh, my! Prince Tamino, fighting off a dragon, lands inside the reptile’s “scary” stomach for a while, bouncing around with soup cans and other swallowed junk. What fun.

Edgy, swift-moving, a dazzler for anyone new to the story, its high style put me in mind of the superb graphic novel from DC Comics by Roy Thomas and Gil Kane called “The Ring,” another work of art in its own right. (If you ever want to convince a reluctant teen of the flat-out greatness of Wagner’s “Ring” cycle, start with that.) 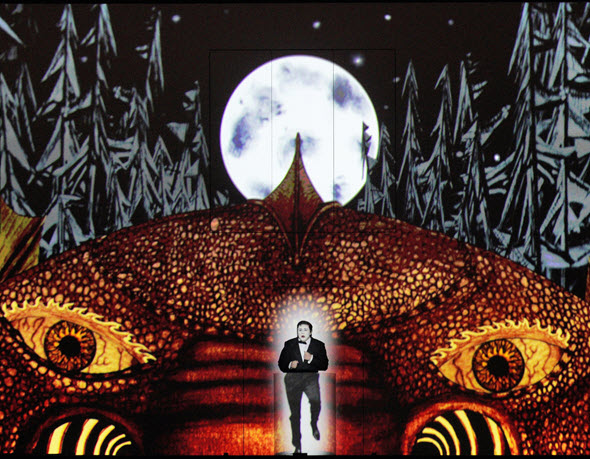 Pavel Petrov, as Tamino, appears to run, but only his top half is real. The rest is part of the film.

The Australian director Barrie Kosky created this unique version of “The Magic Flute” with a British theater company called “1927” for the Komische Oper Berlin, where Kosky was then director-in-chief. Mixing Mozart’s musical theater with wild animations and crazy chases, the production is quite short and kid-friendly.

The trade-off? While Mozart’s music is sung by real opera singers and played by the real Lyric orchestra led nimbly by guest conductor Karen Kamensek, the musical forces are basically tethered to the filmed animations, which limits their artistic expression in a way that is akin to an orchestra playing a film score to a click track. Similarly, because of the white flicker of the antique film look, you can’t really see the singers’ facial expressions. Nor is the charming spoken dialogue in Mozart and Schikaneder’s 1791 singspiel delivered by the performers. Rather, it is projected on the screen as in the wacky cartoon fashion of the silent movie era. 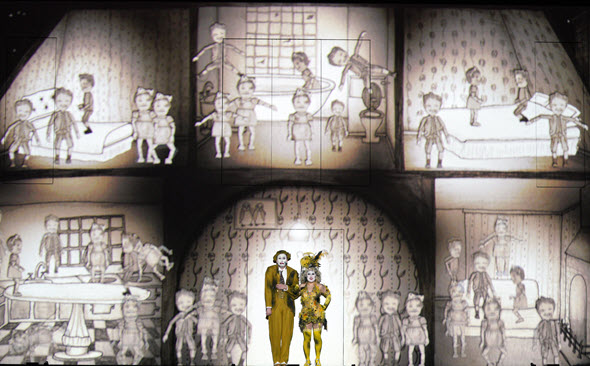 When the endearing birdcatcher Papageno (baritone Huw Montague Rendall in his Lyric debut) is told by his minders that he will have to undergo some scary trials if he wants to have a wife, he doesn’t get to grumble “I’ll stay single” out loud, as in a typical “Flute” production. No doubt Rendall rued the loss of his adorable comic line. But it’s up there on the screen, and people still laugh. Papageno’s compensation includes a super bird-catching cat with larger-than-life pounce. And he’s also destined, sez the cartoon, to have buckets and buckets of kids with his wife-to-be Papagena (soprano Denis Vélez.)

However, it does seem unfair that tenor Pavel Petrov’s initial cameo was squandered. Petrov was the able romantic lead, cast as Tamino, Pamina’s future beloved. Yet the circumstances were just too remote for the necessary intimacy as he sang his beautiful aria “Dies Bildness ist bezaubernd schön” (this picture is enchantingly beautiful) to Pamina’s portrait. You couldn’t see his face. The scene didn’t track. 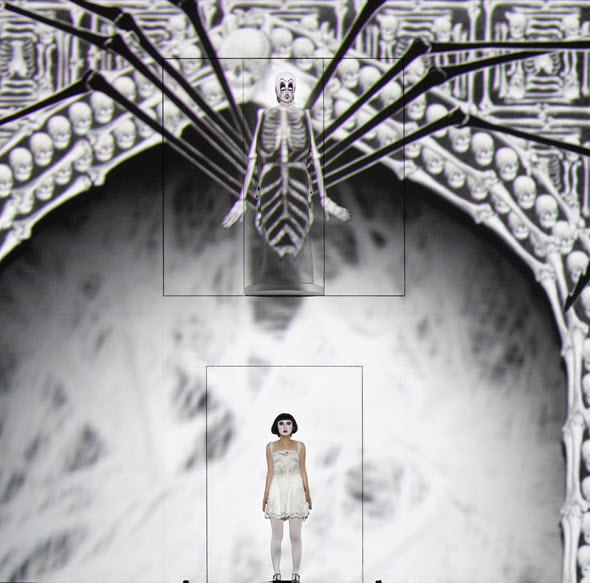 The evil Queen of the Night (Lila Dufy) and her daughter Pamina (Ying Fang) do not see eye to eye.

The Queen of the Night, is a resplendent animated spider, scary from the start, although the only thing you see of the impressive, vocally agile coloratura soprano Lila Dufy is her face, which becomes the arachnid’s head, a tiny little dot on a great big screen. How the young and gifted French singer Dufy, in her Lyric debut, felt about her majestically cartoonified state we’ll not know, but her wildly outrageous look will be a treat for people who have little patience for dusty old period wigs, weeds, and painted drops.

As for the theatrical impact of a duplicitous Queen who seems genuinely sincere at the outset, as if wanting nothing more than to save her lovely daughter from the evil Sarastro – forget about that thread. The Kosky distillation also greatly simplifies Schikaneder’s and Mozart’s charting of Pamina’s dilemma, her growing maturity and change of heart, but the lovely soprano Ying Fang, who sang exquisitely and with rich pathos, prevailed in every way she could. It also felt right that her nemesis and kidnapper Monostatos (tenor Brenton Ryan in a lively character portrayal) got dragged away by a “vicious” cartoon dog. 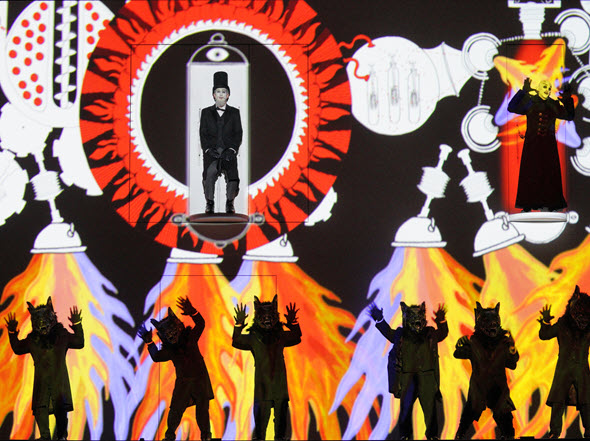 One is grateful for the gravitas of bass Tareq Nazmi, in his Lyric debut as wise and crafty Sarastro, who makes everything right while channeling an Abe Lincoln look. The rest of the cast was generally excellent, and the production itself a novel treat. This is not the kind of a show that makes stars of singers, who are upstaged by animation designer Paul Barritt’s brilliant cartoonery, and whose faces in the flickering light one barely sees. It’s best if the performers are there for the joy of Mozart’s music and the pleasure of participating in a special production, because the Barry Kosky/Suzanne Andrade production is a genuine artwork in its own right. 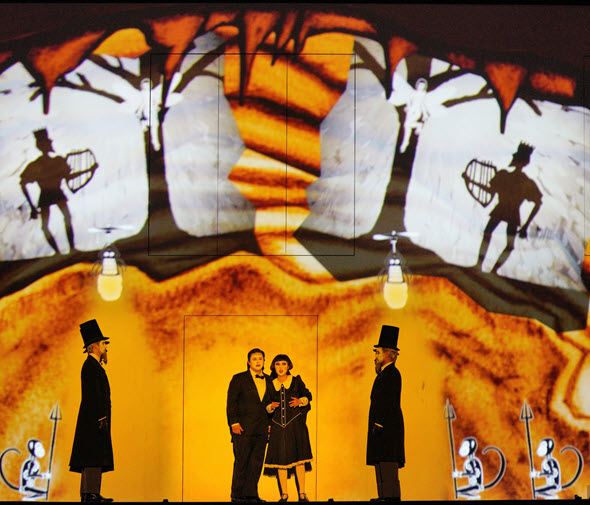 As in all fairy tales, this singspiel ends happily for the lovers, but they must first undergo a trial.

There is a clenched-fist creativity in this Lyric fall season that I admire. Here is a company that suffered the worst of the worst, the sudden Covid-caused quashing of the huge Wagner opera “Götterdämmerung,” the final part of Wagner’s “Ring” cycle, And with that March 2020 turn of events, Lyric’s entire international “Ring” festival planned for that spring was dashed as well.

Who knows? The “Ring” might be tabled for quite some time, if not gone for good. Yet the company has emerged with edgy, exuberant “we’re still here” shows that make shrewd practical sense to serve an audience that has been cooped up for too long. Akin to the smackdown Shakespeare now playing over at Navy Pier, this “Flute” is what it is – audacious, unpredictable and welcome in the moment. I call that a win. 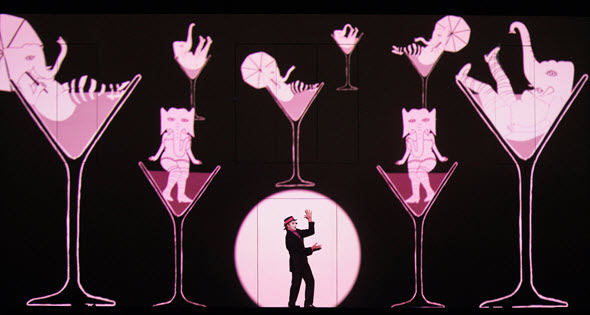 What are pink elephants doing in “The Magic Flute?” It’s a mystery, but maybe Papageno knows.