Singing a Mass that’s far from the Ordinary, new star shows his range in more than voice 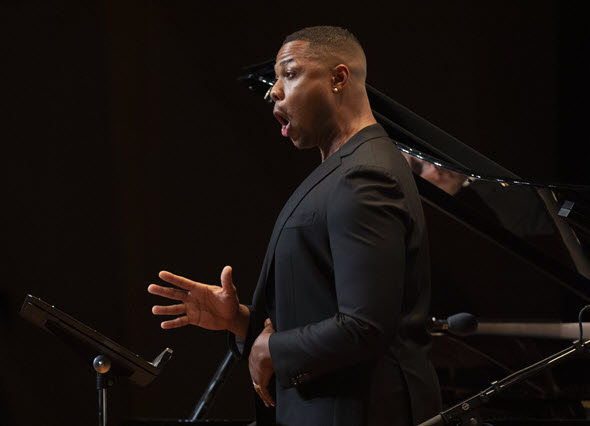 Review: In a voice that might be described as bass-baritone-plus, Davóne Tines presented his potent Recital No. 1: Mass at Ravinia.

It was a musical setting of the Mass like no other, sung by a single vocalist like no other. And as a musical, indeed quite theatrical, experience, Davóne Tines’ mesmerizing performance Aug. 31 with pianist Adam Nielsen at the Ravinia Festival was unlike any other in memory. [Editor’s Note: On Oct. 12, 2021, Tines was named Musical America’s 2022 Vocalist of the Year.]

To say this 55-minute mélange of ritual Latin and interpolated song is no Ordinary Mass would be twice true. While all the episodes of the Ordinary – Kyrie, Gloria, Credo, Sanctus, Benedictus, Agnus Dei – are included in the presentation Tines calls Recital No. 1: Mass, the standard sequence is scrambled and the texts foreshortened. The Credo, the longest and most elaborate of the conventional sections, is reduced to that single word (or two in English: I believe). 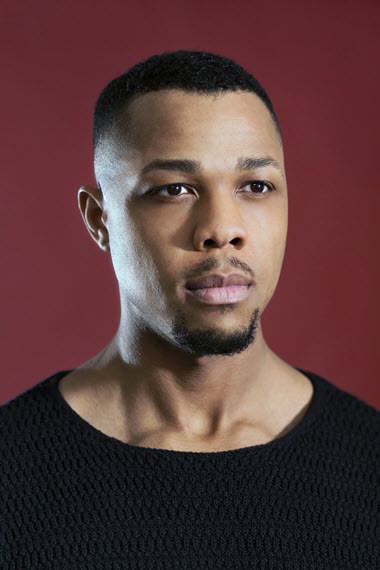 A rising star in the opera world , Tines might be called a bass-baritone-plus. His rich, liquid singing in the low registers extends upward easily and seamlessly. Add to this a commanding stage presence and resonant intelligence, and you have a singer whose artistic range equals the scope of a work encompassing both the aspirations of faith and the tribulations of life.

Recital No. 1: Mass is Tines’ compilation, but its novel liturgical frame was created expressly for him by composer Caroline Shaw, whose distillation of the text has spawned an emotional concentration of laser intensity. Tines seized on what Shaw has given him with imposing strength and vocal beauty, a sure sense of dramatic pacing and what might be called spiritual ferocity.

The ruminative opening Kyrie gave way to an ardent, soaring account of Bach’s aria “Wie jammern mich doch die verkehrten Herzen” (How the perverted hearts afflict me) from Cantata No. 170. Then came the first radical shift in the Mass sequence, the Agnus Dei catapulted forward from its closing position to second: a magnetic incantation, measured and dark. Now appeared three famous spirituals, or rather paraphrases arranged by Tyshawn Sorey under the heading “Songs for Death” – “Were You There When They Crucified My Lord?,” “Sweet Little Jesus Boy” and “Swing Low, Sweet Chariot.” Just as Sorey’s arrangements pushed and pulled at the original melodies, Tines’ ringing delivery brought a new depth and urgency to each song. 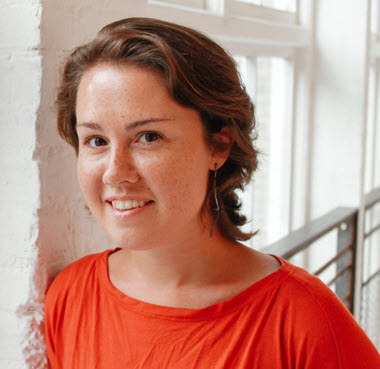 Shaw’s ultimate reduction of the Credo ensued, a simple proclamation — embellished not by the familiar Latin text but again by a Bach aria, “Mache dich, mein Herze, rein” (Purify yourself, my heart), from the St. Matthew Passion. Here Tines’ singing was expansive, indulgent and, as always, specific.

A brief Shaw setting of the Gloria served as prelude to the spiritual “Give Me Jesus,” in an arrangement by Moses Hogan that hewed close to the traditional melody and which Tines infused with the full power of its core proposition: “You may have all this world. Give me Jesus.” 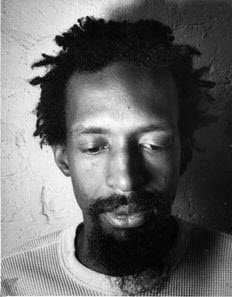 Surely the peak moment (too short a word) of Tines’ recital-Mass is the Sanctus, where Shaw’s cryptic version of the Latin serves as an ideal set-up for Julius Eastman’s hammering, hypnotic “Prelude to ‘The Holy Presence of Joan d’Arc.'” The bare, reiterative text evokes Joan’s final agony at the stake and her recollection of her visions of Saints Michael and Catherine and Margaret. It was quite something to watch and hear Tines, near the end of his hour-long monodrama, declaming again and again that St. Michael said, St. Catherine said, St. Margaret said to Joan: Speak boldly.

Tines’ recital-Mass ends in transcendence, with “Vigil,” a prayerful aria he developed with Dutch composer Igee Dieudonne: “Where there is darkness, we’ll bring light. Hallelujah.”  It is at once a radiant consummation of this spiritual journey and a gentle release for a listener caught up in the transformative potency of art.

Eastman’s music, from 1981, was actually an improvisation that was captured off the radio by Ben Skudi; it formed the basis of Tines’ own version. Tines will repeat Recital No. 1: Mass on Oct. 12 in London at the Barbican. He also will sing the title role in “X: The Life and Times of Malcolm X” in performances May 14-22, 2022, at Michigan Opera Theatre in Detroit.