The North Shore Chamber Music Festival has always flown a little under the radar, and the musical couple who administer it are perfectly all right with that. The summer event might not have the big profile or multi-week seasons of larger counterparts like the Ravinia Festival, but it delivers the same kind of high-quality music-making and is beloved by fans who fill its seats each year.

The festival, which runs over four days in June at the Village Presbyterian Church of Northbrook, was founded by two of the suburb’s most prominent local residents – violinist Vadim Gluzman, who records for the BIS label and regularly appears with major orchestras worldwide, and his wife, pianist Angela Yoffe, who has her own distinguished career. They both perform at the festival and invite friends and colleagues they admire from across the classical world who are top-flight artists devoted to the art of chamber music.

This summer’s edition, which ran June 9-12, celebrated the festival’s 10th anniversary, a testament to the event’s staying power. At the same time, it marked the return to live and in-person concerts after a year when all the festival’s activities were on-line, and the cheers that rang out made clear the audience was thrilled to have it back. 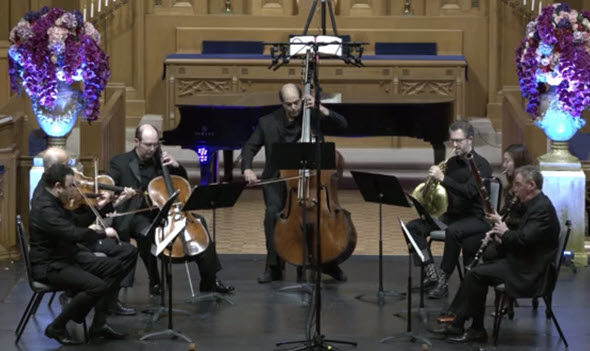 To get a sense of the high-level musicians who participate in the North Shore festival, one needed to look no further than the June 9 marquee selection – Beethoven’s Septet in E-flat major, Op. 20. As bassoonist Catherine Chen noted in her introduction from the stage, the work was the most performed of the composer’s creations during his lifetime and did much to spread his fame. It’s not hard to understand why. There is little if any angst in this piece. The genial first movement sets the tone for the whole composition, which is a listening pleasure from start to finish.

The septet is written in six movements and follows the form of a divertimento (it has been compared to Mozart’s D major Divertimento, K. 334). What is perhaps most remarkable about the work is its innovative scoring, which draws on three families of instruments – violin, viola, cello, double bass, French horn, bassoon and clarinet – and imbues the music with a mini-symphonic sound. All seven instruments have significant moments in the spotlight, with the clarinet part given nearly as much prominence as the violin, and the violin showcased with an unexpected cadenza in the final movement.

The seven musicians lit up this performance with energy and verve. Gluzman is best known as a soloist, but he proved himself to be an adept ensemble leader, blending in well with his colleagues and adapting his big style to this more intimate setting. His flexible line, easygoing manner and silken tone suited the music well. Also notable was Ilya Shterenberg, the fine principal clarinetist of the San Antonio Symphony and Pro Musica Chamber Orchestra in Columbus, Ohio. He handled his challenging part with unerring precision, compelling eloquence and a clear, buoyant sound. Though not spotlighted to the same degree, French horn player Eric Reed made the most of the opportunities he was given, especially in the instrument’s melodic send-offs in the kinetic Scherzo. 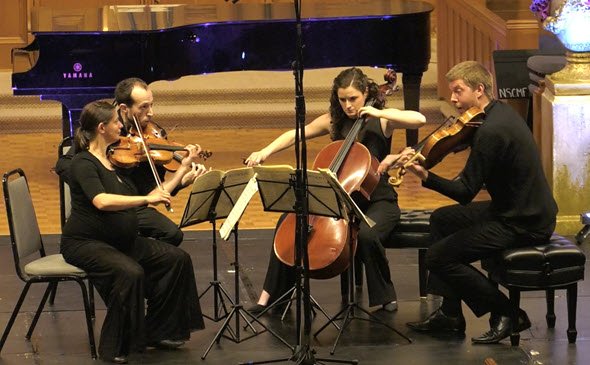 The four musicians of the Ariel Quartet, here performing  Beethoven’s ‘Razumovsky’ Quartet in C major, Op. 59, No. 3, first met as students in Jerusalem.

Nearly stealing the show, though, was Beethoven’s String Quartet No. 9 in C major, Op. 59, No. 3, (“Razumovsky”). It was performed by the Ariel Quartet, which marked its 20th anniversary in 2020-21. The four musicians, who met as students in Jerusalem, poured energy and emotion into an intense, wholly involving performance powered by the dazzling, all-out playing of first violinist Alexandra Kazovsky.

Although the program was titled “Mostly Beethoven,” the composer of the one work not by the famed composer – Atar Arad – joked that it might have more accurately been called “Almost Entirely Beethoven.” The reason was the compact length of his 2008 composition – just four minutes or so. As its title “Toccatina à la Turk” for violin and viola suggests (it exists in four different versions, including one for string quartet), the work was inspired by Dave Brubeck’s famed “Blue Rondo à la Turk,” which is known for its unusual, Turkish-inspired rhythms.

A toccatina is a short toccata, usually a fast-paced, virtuosic piece that was particularly popular during the Baroque era. Arad’s work fits that definition to a tee. Just add in some Brubeck-like rhythmic complexity, a little jazziness and a few dashes of modernistic dissonance, and one has a pretty good sense of it. A couple of bars of the jazz classic are quoted toward the end of Arad’s duo. The performance by Arad and violinist Lisa Shihoten possessed the technical sureness and driving momentum the work demands.