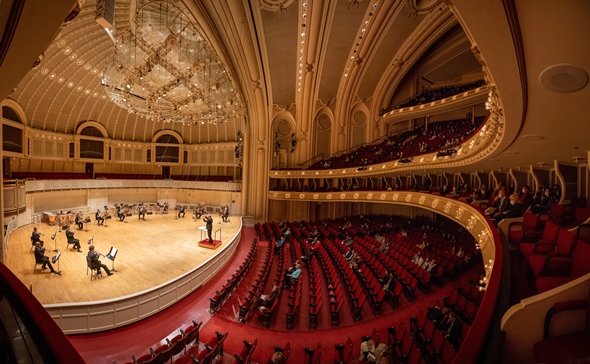 The 2020-21 season was late in starting, it will be over almost before it begins, and the hall can be only sprinkled with listeners. But it’s a start worthy of fanfare. (Photos by Anne Ryan)

Review: A Copland flourish for brass and percussion announced the Chicago Symphony’s return. The program repeats May 29 and 30.

It was like music’s great beating heart could not ultimately be stilled, this ferocious burst of timpani and bass drum followed by a stentorian peal of brasses. When had the proclamation of Copland’s “Fanfare for the Common Man” ever carried a more vital and exhilarating message? The Chicago Symphony Orchestra, music itself, had returned to Orchestra Hall.

After nearly 15 months of pandemic-induced silence, the CSO – a version of it anyway – gave a live concert May 27 to launch three weekends of programs that will constitute the whole of the 2020-21 season. The band was back. Band, indeed: just the Chicago Symphony’s vaunted brasses, a few percussion players and a pianist in a supporting role. 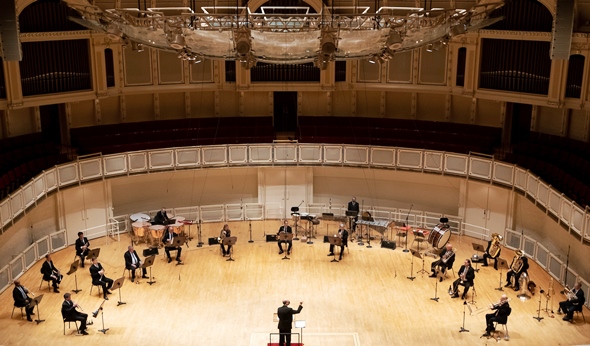 it doesn’t take many brass players to reach full fortissimo at Orchestra Hall.

That small ensemble, superb and potent, was arrayed in a deep half-circle before conductor Michael Mulcahy, a much-experienced maestro who also happens to be one of that brass section’s own – a trombonist of long service with the CSO. Like the musical forces on stage, the audience was sparse: officially 398 listeners in a hall that seats 2,522. Although City of Chicago pandemic regulations allow for 60 percent of capacity, according to a CSO spokesperson, it was the requirement of 6-foot distancing between couples and foursomes (the most that could be seated together) that kept attendance so low. 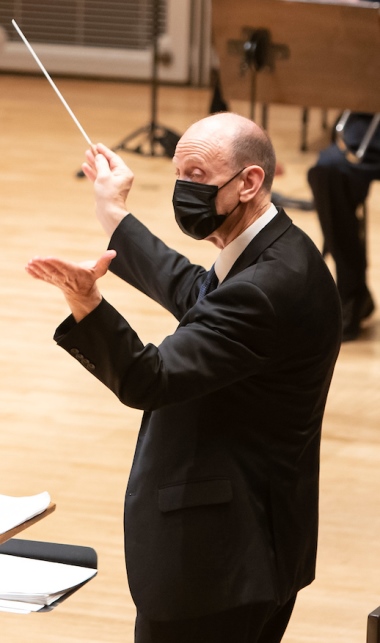 Michael Mulcahy frequently steps from the brass ranks to conduct.

The rigors don’t end there for the dozen performances scheduled over the next three weekends. Masks are required throughout the 60-minute concerts. Tickets are sent out digitally and scanned from cell phones at the door. Patrons are instructed when to show up, by rows, starting 45 minutes before concert time. There is no intermission, no drinks or food. And no convivial milling, though that rule seemed to go out the window after the concert as folks gathered in (no doubt excited) clusters in the main lobby before exiting.

Still, weird as the mostly empty hall felt, it was a joy once again to be experiencing the art of music at such a high level, resonant and intricate and delivered with elegance, energy and aplomb. All of the above applied immediately to the first of two substantial pieces on the program, Gunther Schuller’s Symphony for Brass and Percussion, an essay in four movements that explores the possibilities of brass ensemble with imagination and wit and an edge that’s still keen more than 70 years on.

Here, as everywhere in this well-prepared program, Mulcahy and the CSO brasses delivered Schuller’s layered textures and shifting rhythms with consummate virtuosity, both individually and in the effortless and sure meshing of their ensemble sound. After so many months of listening through loudspeakers and headphones, it was a wondrous delight to hear these eloquent brasses in the full splendor of their proper space.

The other large offering was Michael Tilson’s Thomas’ “Street Song,” essentially a tapestry in three continuous panels that manages to interconnect the auras of urban music, folk music and jazz. The title belies the scope as well as the sophistication of a work that seems made for ballet. The lyricism, pungency and bluesy languor of “Street Song” effectively swung the spotlight around this brass circle to showcase these ace musicians top to bottom, from trumpet to tuba.

A Samuel Barber rarity, “Mutations from Bach,” which applies lustrous embroidery to a couple of chorale tunes, reveled in the Chicagoans’ luscious sound, and the ripping Presto barbaro from Leonard Bernstein’s “On the Waterfront” film score brought this reclamation concert to a hair-raising end. Or nearly so.

An encore offered a very familiar tune, but one so grandly, even heroically arranged — or disguised — that it might have been extracted from a Verdi opera, maybe “Nabucco.” Only indirectly, Mulcahy acknowledged the band’s early Happy Birthday greeting to CSO music director Riccardo Muti, who turns 80 in July. This riotously clever gag was the handiwork of composer Timothy Higgins, principal trombone of the San Francisco Symphony and a teacher at Northwestern University. 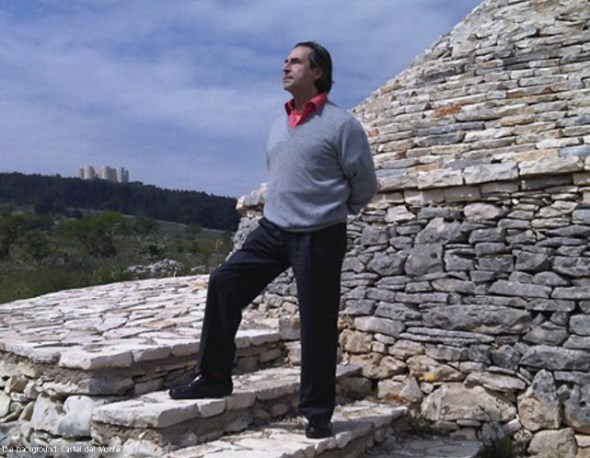 The musicians made it clear their music director, still in Italy, is missed. (RiccardoMuti.com)