Sound the trumpets (and trombones and all): Chicago Symphony’s tuning up for its return 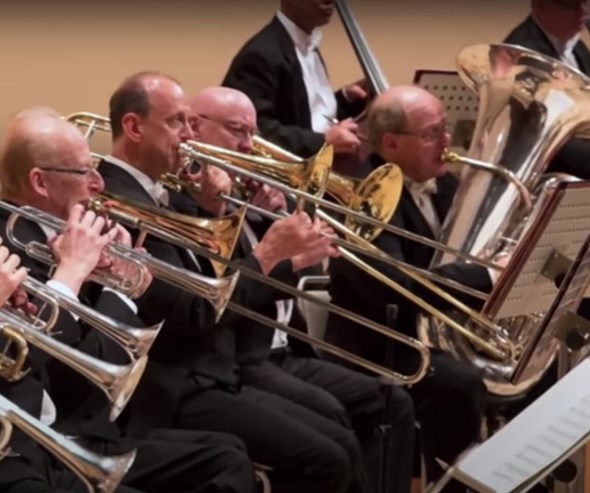 Report: After some 14 months of pandemic-induced silence, the Chicago Symphony Orchestra will take the stage again.

It’s the fanfare trombonist Michael Mulcahy and his fellow brass players in the long-silenced Chicago Symphony Orchestra have been aching to unleash. Indeed, it’s likely to be a heart-quickening moment for everyone, on stage and in the live audience, when Mulcahy and company proclaim the CSO’s renewal of concerts at Orchestra Hall on May 27 with Copland’s “Fanfare for the Common Man.”

Some 14 months after giving its last performance at Orchestra Hall, so long banished from its home and audience by the pandemic, the Chicago Symphony begins and ends its 2020-21 season with a three-weekend flurry of concerts under three different conductors. Mulcahy, a veteran of the brass section who also enjoys an international conducting career, will lead the opening program. (For a famly-friendly introduction by CSO players to the instruments in the brass section, check out this video:)

Erina Yashima, a protégé of CSO music director Riccardo Muti who is now on the staff of the Philadelphia Orchestra, next leads a concert featuring the CSO strings. And frequent guest conductor Edo De Waart presides over the final program of works by Mozart and Wagner.

Concerts will last about an hour with no intermission and no drinks or snacks for purchase. To manage social distancing, audiences in the 2,200-seat hall will be limited to 398 people. You might say it’s at least a start. But for Mulcahy and company, it’s much more than that. 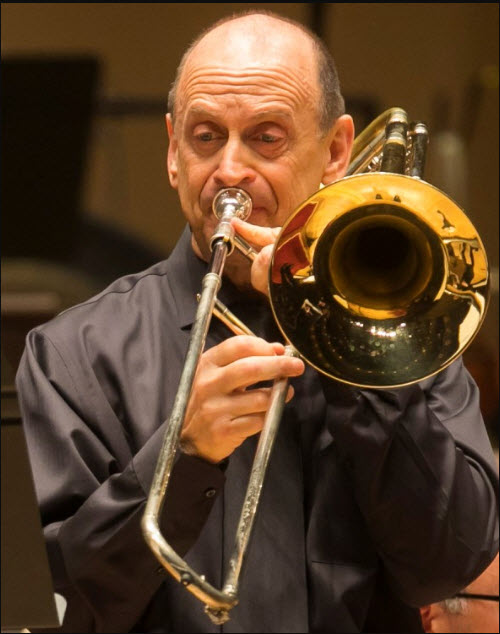 CSO’s Mulcahy: Not playing is “a special kind of torture.”

Reached in his native Australia, where he has been coaching groups of brass players for the last few weeks, Mulcahy said that he and his CSO colleagues “are so desperate to play we feel malnourished. To be practicing and never sharing that experience through performing, it’s a special kind of torture.”

That first brass-and-percusson concert should clean out any lingering cobwebs inside Orchestra Hall. The entire program of American music, including works by Barber and Bernstein, is material these players know very well.

“We wanted it to be an American-themed concert, because it feels like a rebirth to us after Covid, and we are going to have many first-responders in the audience,” Mulcahy said. “It’s going to be a privilege to play for them. It’s the rebirth of live music at Orchestra Hall also. And to have that first concert be a connection to the past century makes it sort of a cool through-line. We cover a lot of ground.” One of the works, rich in jazz harmony, is “Street Song,” composed by Michael Tilson-Thomas, the former San Francisco Symphony music director.

Although Orchestra Hall won’t be full – both ensemble size and audience capacity are still limited by Covid restrictions – Mulcahy is actually keen to hear the brasses resound in a largely open space. “Who knows?” he said. “We will fill up the stage, but there will be fewer bodies in the hall. It might actually ring a little more, and we might be playing on the flat.” (That is, no risers, as they have been doing for their CSO.tv concerts that have played online.) “There may be more resonance. And to think that we have been doing nothing for so long, and that at last we are going to get the whole brass section together, and that we were going to do this concert four times, that is really special.”

CSO president Jeff Alexander said creative collaboration with the musicians and artistic guidance from music director Riccardo Muti as well as consultation with city and public health officials “have made it possible to begin safely sharing the joy of live music with the community again.”

Mayor Lori Lightfoot, in a statement, said: “The return of Chicago Symphony Orchestra concerts at Symphony Center will put our city that much closer to fully reopening and recovering from the COVID-19 pandemic. Having a successful, thriving arts scene is essential to ensuring our city’s post-pandemic prosperity, making programs like these vitally important.” 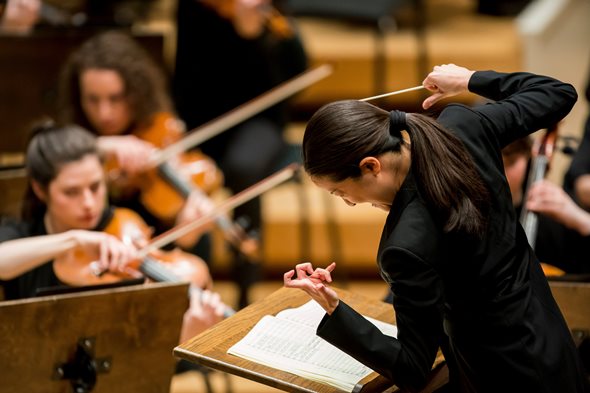 Conductor Erina Yashima returns to the CSO in June to conduct four performances.

Yashima, who conducts the second program June 3-6, is a past winner of the Chicago Symphony’s Sir Georg Solti Conducting Apprenticeship. Along with Schubert’s Symphony No. 5 in B-flat, the German-born Yashima also will lead two Novelettes by Samuel Coleridge-Taylor and “Strum” by Jessie Montgomery, whom Muti recently named as the CSO’s next composer in residence. 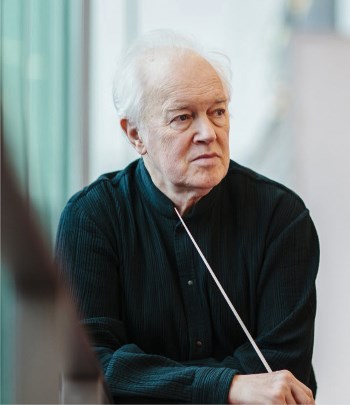 Edo De Waart will conduct the brief season to a close.

The final weekend, June 10-13, offers Mozart’s “Don Giovanni” Overture and Symphony No. 40 in G minor conducted by De Waart, former music director of both the San Francisco and Milwaukee Symphony Orchestras and several times guest conductor of the CSO. Also on his program is Wagner’s “Siegried Idyll.”

CSO management outlined extensive measures to protect the health and safety of patrons and staff. Everyone must wear face coverings and observe social distancing guidelines when inside Symphony Center. Regular cleanings utilizing CDC-approved aerosol cleaning products will take place in Orchestra Hall and corresponding lobby spaces throughout the building prior to each performance, and new hand sanitizer stations have been added throughout Symphony Center.

The Symphony Center HVAC system also meets the highest standards to ensure proper filtration and fresh air circulation throughout the building, management said. Patrons will be able to utilize eTickets and touchless ticket scanners upon arrival at Symphony Center. Concessions will not be available and there will be no late seating and no intermission at performances. Patrons will also be asked to remain in their designated seating section and associated lobby spaces.