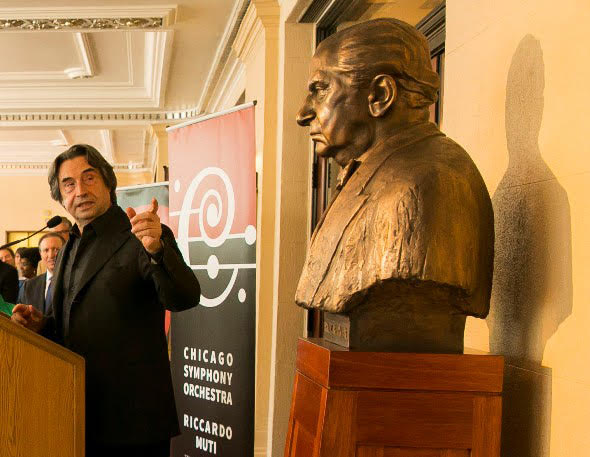 CSO music director Riccardo Muti at the unveiling of the Fritz Reiner bust at Symphony Center on June 14, 2016. (Todd Rosenberg)

Like everyone else in the performing arts, conductor Riccardo Muti is standing by in the wings – waiting for the coronavirus to leave the stage, the concert hall, the global spotlight.

But while the Chicago Symphony Orchestra’s music director, who last appeared on the podium at Orchestra Hall in March, has been sidelined at this home in Ravenna, Italy, he has been far from idle. The suddenly ample time on Muti’s hands has allowed him, among other things, to plow more deeply into treasured masterworks and explore the archive of Chicago Symphony concert recordings to curate an ongoing series of concerts broadcast by WFMT (98.7 FM) and streamed at wfmt.com.

Now in a second cycle of programs, Muti’s hand-picked concerts – dubbed From the CSO Archives: Maestro’s Choice – continue May 26 with three works featuring soloists drawn from the orchestra and playing under his baton.

“We must always remember that the orchestra musicians are fantastic soloists, so I wanted to bring back these wonderful performances,” Muti said by phone in a trans-Atlantic interview with Chicago On the Aisle. “There are now two orchestras in my heart – the Chicago Symphony and the Vienna Philharmonic, which I have conducted regularly since 1971. So the fact that nobody has been able to come to Chicago Symphony concerts means that as a practical matter we have lost the entire remainder of the season, with concerts now postponed into next season or after. And it is very painful. I think about the musicians every day. So I am happy to put together some programs to be broadcast, to remind the audiences of the greatness of this orchestra.” 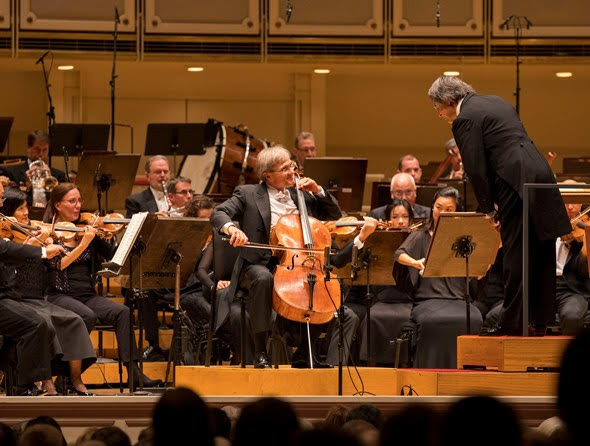 Muti also dedicates one concert to the legacy of legendary CSO music director Fritz Reiner, whose bust Muti was instrumental in bringing to the lobby of Symphony Center. As an aspiring young conductor, Muti regarded Reiner’s recordings with the CSO as paragons of perfection. And today, at age 78, himself now esteemed among the world’s foremost conductors, Muti still places Reiner in a triumvirate of unsurpassed masters rounded out by Arturo Toscanini and Wilhelm Furtwängler.

“Fritz Reiner was one of the gods on the international scene of conductors,” Muti said. “He made the Chicago Symphony the great orchestra it is today. As a student in Milano, when I was listening to LPs, the CSO for me was Fritz Reiner. Those performances of the CSO under Reiner were like experiencing a miracle. He made the orchestra unbelievably great. Even with all the experience I now have, I am astonished to hear performances led by this fantastic conductor. I believe that the name of Reiner will only become greater and greater in the future.” 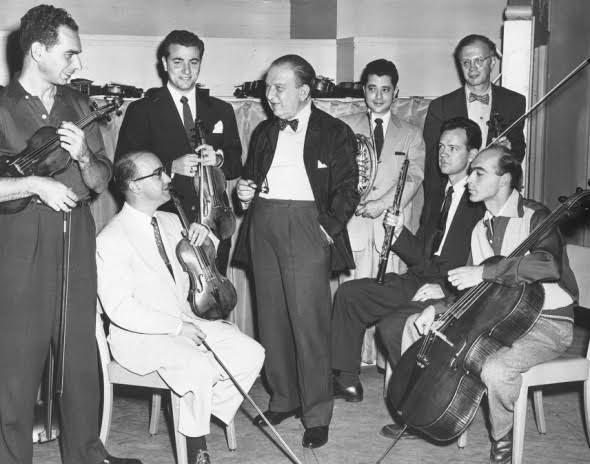 For his Reiner night June 9, Muti has chosen Kodály’s Dances of Galanta, Copland’s Suite from “The Tender Land,” Hindemith’s Cello Concerto with principal cello János Starker and Prokofiev’s Symphony No. 5 in B-flat.

A complete, detailed list of Muti’s curated programs with starting dates and continuous streaming can be found here.

As Italy and the rest of central Europe open up, Muti enjoys the prospect of once more creating music in the present tense. The reopening has its wrinkles, however. The maestro relished sharing a sort of cultural dilemma that he admitted may be unique to Italy:

“Until recently, we couldn’t leave our location, but now we can go to other locations on a limited basis. And there is this amusing situation that is getting much talk, because a few days ago the government said we could meet only with people who are close relatives. Not friends, but people that are closely connected to us. So suddenly a debate has started. Who are the close relatives?

“And people started to ask, what if you have a lover? Is that OK? Practically everybody has a cousin that is less important than a real friend. Maybe you love your friend of 40 years more than a relative you have never seen in your life, so everybody is confused! Maybe the police will ask how long you have been together. So this is the endless discussion.” 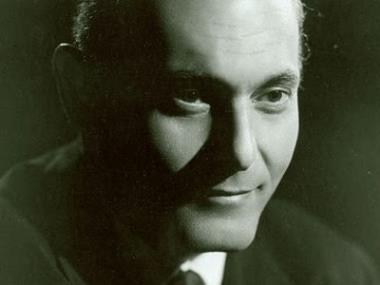 Georg Solti’s program of Mozart, Strauss and the finale of Wagner’s ‘Das Rheingold’ is scheduled for June 23.

Relaxed rules and the increased mobility have allowed Muti to resume his career. He will conduct the opening concert of this year’s shortened Ravenna Festival on June 21 at the nearby Rocca Brancaleone, a 15th-century fortress that surrounds an open-air space he likened to Millennium Park. Another open Italian venue beckons in July, in Paestum with its “fantastic Greek temples.”

The outlook for Muti’s return to Chicago and a CSO season set to open Sept. 18, is less clear. Chances are it will not be concerts as usual. An early capstone to Muti’s aborted Beethoven year, celebrating the 250th anniversary of the composer’s birth, is still scheduled: the monumental Missa Solemnis, which even at this late point in his career Muti has yet to conduct. Though he has been immersed in the score, he knows the idea of assembling orchestra, chorus and soloists to bring off Beethoven’s grand Hass is a stretch right now.

More realistic, he says, is revamped programming that would rotate smaller-scaled ensembles on stage, allowing most members of the orchestra to play in a concert lasting 60 to 80 minutes without an intermission.

What is not realistic long term, neither economically or spiritually adequate, he adds, is the idea of playing to an audience 400 or 500 in observance of social distancing at Orchestra Hall. By Muti’s lights, streaming is the only possible future for any orchestra that hopes to survive.

“The audience can be several hundreds of thousands of people, not just a few hundred. They pay, not so much as for a ticket, maybe 18-19 Euros, roughly $20, not so much. And so the Berlin Philharmonic, for example, has a very large audience everywhere in the world. And also the Opera in Rome — they are streaming three operas I conducted: Simon Boccanegra, Ernani and Nabucco. I am getting a lot of messages from every part of the world, from Tokyo and China and South America. 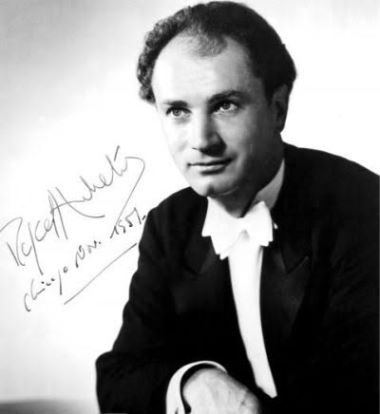 “The vision has to become completely different,” he said. “This virus has made us realize that for culture in the world, we must change our way of thinking. Even if the auditorium were full, with 2,000 or 3,000, it is not enough. Ultimately we have to speak to the world. The orchestras that do not do this will little by little become regional and they may die.”

“Concerts with only a small audience in the hall will not be enough to sustain the economy of the orchestra for long. And how do we choose them? That they are more handsome? Or older? Or richer? We have until September, several months, to think about how to do this.”

While Muti expressed eagerness to get back to his Chicago musicians, he stressed that he was not worried about their musical fitness. “The problem is not artistic,” he said, “but it is a psychological problem to have so many months of solitude, and loneliness, and not being able to meet or to work or talk or perform together.”