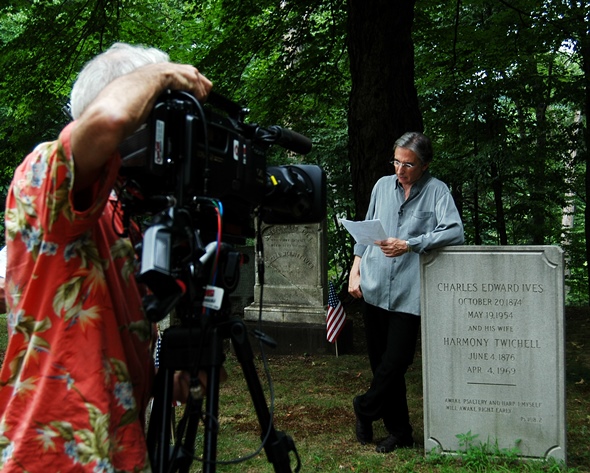 Some years ago, when I was in San Francisco at a national gathering of music critics, I had the delightful and eye-opening experience of listening to conductor Michael Tilson Thomas, music director of the San Francisco Symphony, personally introduce an episode of his landmark educational series called “Keeping Score.” This elaborately produced video, shot on locations in Austria, offered remarkably insightful – and culturally textured – observations on Gustav Mahler and how he got to be the composer he was. 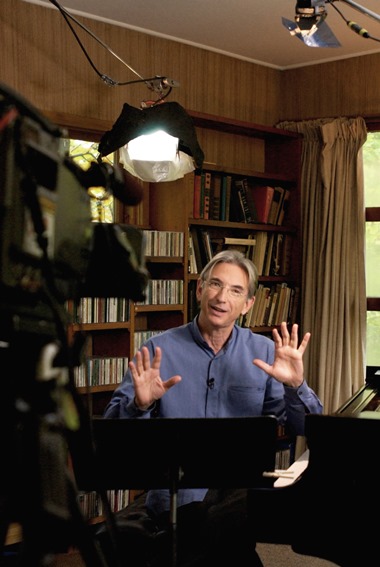 Michael Tilson Thomas at his piano during filming of Keeping Score

Tilson Thomas would go on to create a total of nine such episodes, each devoted to a composer and each capped by a full-length concert performance of the representative work at hand. Now, most happily in these trying times, the San Francisco Symphony just announced plans to release all nine parts of “Keeping Score” for unlimited free streaming on the orchestra’s YouTube channel.

Beginning March 19, episodes will be released in batches each week through April 8.

Through nine one-hour documentaries, Tilson Thomas and the San Francisco Symphony trace the lives of eight influential composers from around the world. Tilson Thomas explores the motivations and influences behind major classical works by Tchaikovsky, Beethoven, Copland, Stravinsky, Berlioz, Ives, Shostakovich – and Mahler, to whose life and work two segments are devoted. Each episode is accompanied by a one-hour concert program by the San Francisco Symphony.

Launched in 2004, “Keeping Score” was designed to make classical music accessible to people of all ages and musical backgrounds through groundbreaking television, radio, and educational components. The video series pairs in-depth documentary explorations of composers and their music with concert performances with the San Francisco Symphony conducted by Tilson Thomas on its home stage, Davies Symphony Hall.

“Creating ‘Keeping Score’ remains one of the most exciting journeys the San Francisco Symphony and I have taken together,” said Tilson Thomas. “It offers real insight into the origins of the music and the devotion of the musicians who keep its message a living tradition. As we all navigate our brave new world, I take pride in being able to share with everyone the music and stories that hold such deep meaning to me and my orchestra colleagues. Music connects us and has never been needed more.”

Against the daunting and confining background of the coronavirus crisis, said San Francisco Symphony CEO Mark C. Hanson, there is “no better time to make this remarkable series available to all without barriers.”

Aaron Copland’s music reflects the transformation of the American experience that took place during his lifetime. Born in 1900 in Brooklyn, he witnessed the wild confidence of the Jazz Age, the fears of the Great Depression and the rallying of the nation as it entered World War II. Copland’s ideal was to write music that would express how it felt to live those experiences. Copland transformed classical music to capture the energy of American’s bustling cities and the vast quiet of its empty plains. He created a musical style that evoked the diversity of the American people. The sounds of Jewish music, African American jazz, folk songs, cowboy ballads and Latin American dances all played their parts in his compositions, which he hoped would bring people together in times of crises. Today, Copland’s music seems comforting and celebratory. Included is a full-length concert performance of Copland’s “Appalachian Spring” (original version for 13 instruments).

Shostakovich may have hidden a subversive cipher beneath the surface of his life-saving Symphony No. 5. This is all the more shocking since another bad review from Stalin’s totalitarian forces could have meant a sentence to the Gulag or worse. After his opera “Lady Macbeth” was publicly condemned as immoral by the Soviet newspaper Pravda, in 1935, Shostakovich knew he had only one chance to redeem himself. When he penned this Fifth Symphony, the composer was literally writing for his life. The risk was so high that Shostakovich slept on the stairs outside his apartment so the secret police would not wake his family when they came for him, as he was sure they would. This episode investigates the crucial symphony that would either redeem Shostakovich or doom him. Did he dare hide a kernel of musical criticism in what appears to be a paean to the Motherland? Tilson Thomas and the San Francisco Symphony as they explore the hidden language of this masterwork in afull-length concert performance of Shostakovich’s Symphony No. 5 in D minor. 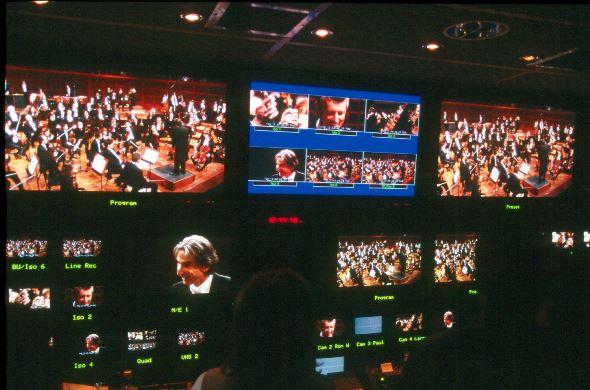 Ranging from tender sentiment to savage chaos, the music of early 20th-century composer Charles Ives explores an essentially American riddle: How can we survive the relentless assault of our own success? It was an enigma Ives embodied himself. He believed that we should all be brave enough to go it alone – yet he earned his living by selling insurance! Tilson Thomas and the San Francisco Symphony unravel the layers of Ives’s “Holidays” Symphony to reveal a surprising musical portrait of New England. The symphony’s four movements journey across the terrain of the seasons. From the intimacy of the winter hearth to the explosive concussion of the 4th of July, Ives doggedly liberates music through a constant confrontational crunch.

From the sounds outside his bedroom window – a kind of sonic goulash of military marches, ethnic dance bands, church bells, ritual prayer, and nature itself – Gustav Mahler created an entire universe of emotion in music. In an astonishingly productive twenty-five years, he fashioned ten symphonies and 45 songs of cosmic scale, great beauty, and jarring emotional twists and turns. And he did it all in brief stretches away from his day job as one of Europe’s preeminent conductors. In “Gustav Mahler: Origins,” Tilson Thomas journeys to rural Bohemia to rediscover the inspirations of Mahler’s music, and traces the composer’s life through the premiere of his First Symphony in 1888. It shocked the contemporary audience, but as Tilson Thomas and the San Francisco Symphony reveal, on location and in performance, this ground-breaking symphony contains elements of everything else that Mahler composed. Part 2, “Gustav Mahler: Legacy,” examines Mahler’s creative growth, from the 1890s to his death at the age of 51 on May 18, 1911, including his symphonies, the Rückert songs and “Das Lied von der Erde.” The documentary charts Mahler’s mercurial career as a conductor, from the Vienna Opera to Carnegie Hall in New York, as well as his tempestuous relationship with his wife Alma. Episodes include full-length concert performances of Mahler’s Symphony No. 1; “Songs of a Wayfarer,” with baritone Thomas Hampson; Adagietto from Symphony No. 5; Scherzo from Symphony No. 7; and Rondo Burleske from Symphony No. 9.

In 1913, with Europe on the brink of war, a fashionable Parisian audience reacted with hostile frenzy to the premiere of Igor Stravinsky’s new ballet score, “The Rite of Spring.” The shocking music and dance provoked a riot that evening, and Stravinsky’s work was quickly recognized as perhaps the most revolutionary piece of the 20th century. It still has that reputation today. In this episode, Tilson Thomas and the San Francisco Symphony take you from the salons of St. Petersburg to the villages where Stravinsky found inspiration in the earthly power of Russian folk music and dance. Tilson Thomas then retraces Stravinsky’s journey to the cultural crossroads of pre-war Paris. There, in collaboration with the great impresario Sergei Diaghilev and his star dancer Vaslav Nijinsky, Stravinsky developed the shocking, erotic, and violent evocation of pagan Russia that became “The Rite of Spring.” The episode includes a concert performance of the work as well as music from Stravinsky’ earlier ballet score “The Firebird.” 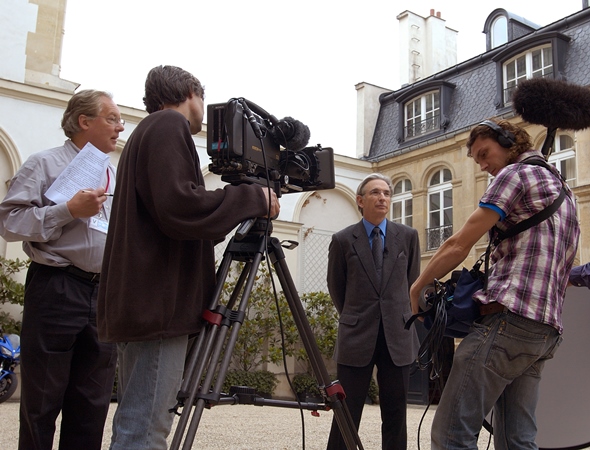 “I feel, therefore I am.” For Hector Berlioz, and for the Romantic movement, those were more than words; they were a song of the heart. But with the unprecedented outpouring of emotion in his “Symphonie fantastique,” Berlioz almost overpowered Paris. This orchestral sonic spectacular, written to win the heart of a beautiful actress, demanded sacrifice from its author and his audience. From romantic daydreams to deadly displays of devotion, the symphony relates an “episode in the life of an artist” – that artist being the love-obsessed composer himself. His fantastical symphony encapsulates a torrent of inner drama – and trauma. The episode includes a concert performance of Berlioz’ “Symphonie fantastique.”

“Listen and obey! Fate decrees you must follow the road down to a place you have never imagined, yet secretly always feared!” This is the dramatic declaration Tilson Thomas hears in the opening notes of Tchaikovsky’s Fourth Symphony. But how can marks on a 150-year-old page transform into the fearsome noise that marks this symphony’s climax? Where is the unflinching emotion found? From decoding the score, to uncovering Tchaikovsky’s hidden history, through rehearsals, tuning, and the big bang of opening night, this episode offers a backstage pass to the San Francisco Symphony – and a performance of the Tchaikovsky Fourth.

Not all revolutions are political. Some overturn artistic conventions. Beethoven’s “Eroica” Symphony challenged accepted artistic notions of music and brought the listener along on a gripping voyage into the unconscious. Beethoven spent three years writing the “Eroica,” which was an intimate and unflinching journal of a personal crisis. Retracing Beethoven’s steps through Vienna’s aristocratic ballrooms and Austria’s rustic villages, Tilson Thomas explores how Beethoven channeled his fears of increasing deafness, his admiration for Napoleon, and his obsession to prove himself the greatest composer of his time. Included is a concert performance of the “Eroica” Symphony.