‘Sheepdog’ at Shattered Globe Theatre: When tragedy in black and white dissolves into gray 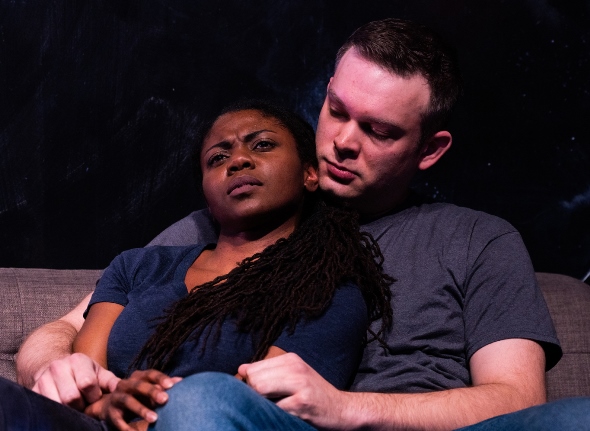 Amina and Ryan are both Cleveland police officers. She’s black, he’s white. They’re good, dedicated cops. They’re also lovers. They’re thinking long term, about having a child together. Then Ryan shoots and kills a young black man, and lies about how it went down.

That’s the rub of Kevin Artigue’s two-hander “Sheepdog,” which deals with the evident bundle of issues in a brisk 90 minutes that leave the impression that a somewhat longer and more expansively argued play might have been time better spent. Shattered Globe Theatre’s current, and just extended, production directed by Wardell Julius Clark deals acutely with Artigue’s material but cannot create substance greater than time and text allow. 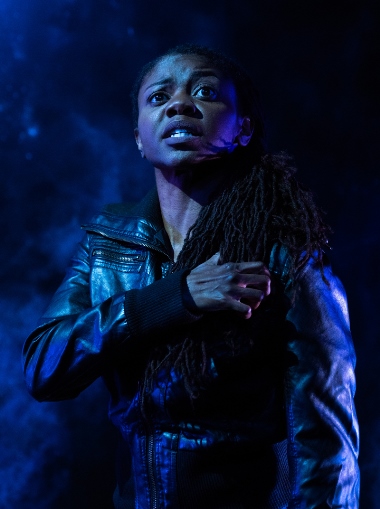 Amina (Leslie Ann Sheppard) has reason to wonder whether her white lover — and fellow cop — is the man she thinks he is.

One could argue that it’s really Amina’s story. She (the smartly focused and ardent Leslie Ann Sheppard) provides a running narrative of events – from her own perspective; and in an effective bend of the dramatic arc, that narrative flows backward as well as forward. In fact, the play begins just before the distressed denouement, then quickly rewinds to a happier juncture for Amina and her improbable new soulmate, this man in whom she will place so much hope and trust.

Drew Schad cuts a sympathetic figure as a white guy who’s smitten by the intelligence, wit, charm and physical beauty of his young black partner. He tells her he doesn’t see a black woman, but rather a very appealing woman to whom he is attracted for lots of good reasons. At first she shrugs, laughs and recoils, only to realize that she returns his ardor, and their game is on. It’s all good until her police radio lights up with a call about a shooting: a cop has shot and killed a black youth. The cop is Amina’s guy.

This black woman, who grew up in the neighbor where she now works with Ryan, can’t believe the man in whom she believes implicitly could have done such a thing. There’s must be a very good explanation. And Ryan has one. It’s complicated, and he’s deeply shaken. But he goes through the whole thing with Amina, moment by harrowing moment. Schad is quite convincing in mustering the agony of a cop on the precipice, teetering and distraught as he tries to recall the rapid sequence of events in his accounting to Amina.

She is relieved. The victim brought it on himself. Ryan had pulled the car over to check on a motor violation. The black guy behind the wheel was argumentative, then he resisted, then he pulled something from his waistband. Ryan had to make a split-second decision. Maybe it was kill or be killed. Amina understands. They do dangerous work. But Ryan, her everything, is still alive. 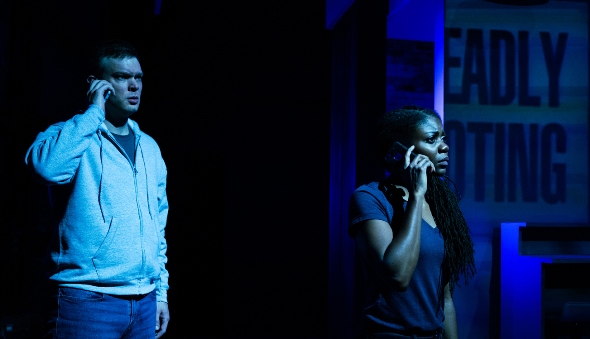 Then events take a turn. New evidence crops up. There was a witness who videoed the traffic stop, the physical encounter, the shooting. The video doesn’t square with Ryan’s story.

It’s right around here, in the blurring and contradiction and which are you going to believe — what I’m telling you or your lying eyes — that the term sheepdog comes in. Ryan explains sheepdogs to Amina: They defend the hapless, helpless sheep from the enemy out there, the wolves. Some cops, he says, see themselves as sheepdogs. Decent society is the sheep; the threat is out there. Sheepdogs are vigilant, poised, effective.

In the stress and horror of this crisis, Amina fluctuates wildly between the extremes of faith in her man’s personal integrity and a nagging suspicion that he has willfully shot down a defenseless black man. And Schad shows us a cop, still reeling from that traumatic instant, who is himself not entirely sure what happened. Ryan’s best attempt at honesty only underscores his torment and his remembered terror in that now-receding incident.

“Sheepdog” is not a happily-ever-after story. It’s a fleeting moment on the mean streets, a compound calamity. Ryan’s ultimate justification for pulling the trigger may echo both intrinsic fear and conditioned racism. But the play’s slice of societal malignancy strikes me as too thin for compelling theater. It is more like a neatly molded and packaged political statement. It is too abrupt for tragedy, too slight to match up with the scale of human drama.