‘Freedom Ride’ at Chicago Opera Theater: Buffing the surface of a bold quest for equality 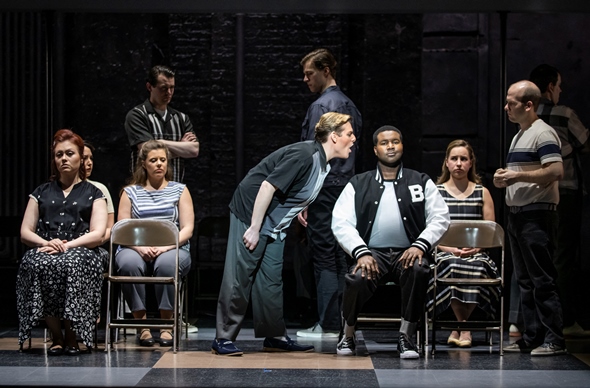 On the one hand, Dan Shore’s opera “Freedom Ride,” now in its world premiere run by Chicago Opera Theater, feels like a simplistic gloss on a turbulent and violent time that is more talked about than evoked. On the other hand, the work’s uncomplicated directness possesses its own fetching appeal, and it echoes through Shore’s gospel-inspired music, front to finish. 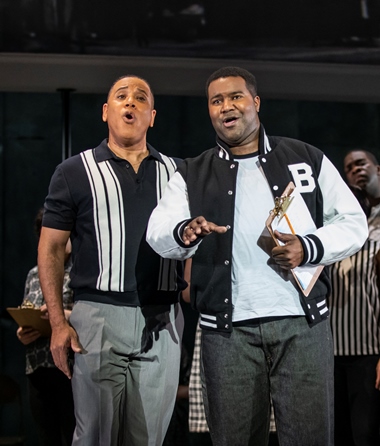 Prospective rider Russell (Tyrone Chambers, right) tries to get the picture of what lies ahead from organizer Clayton (Robert Sims).

“Freedom Ride,” set in New Orleans in the summer of 1961, recalls the civil rights campaign to integrate public transportation by rallying African Americans to pack buses and trains bound for Jackson, Miss. The opera is not about the ride, but rather about the ramp-up, in particular the commitment of one young woman, Sylvie, to join in the risky enterprise.

Shore, who wrote his own libretto, is white. The creative team and cast are mostly black. Watching “Freedom Ride” play out on the Studebaker Theater stage under the baton of COT music director Lidiya Yankovskaya, I couldn’t help thinking of that paragon of American operas, “Porgy and Bess,” another story about black culture created by white men, George and Ira Gershwin and DuBose Heyward.

What connected the two works in my mind was the conscious – or, more accurately, devoted – effort by the Gershwins and Shore to bring a black cultural essence to their respective stories. Shore achieves exactly that, and most convincingly and engagingly, through the gospel spirit that suffuses his score. Sometimes, that spirit rises fully fledged in choruses expressive of faith and in supplication of heaven’s help. But just as often, pulse and inflection – the swing – of gospel music courses just beneath the surface of the larger narrative.

Soprano Dara Rahming’s performance as Sylvie exudes the down-home charm of a young woman who suddenly finds herself catapulted from a very ordinary life into the maw of history. But Rahming the actor also gets caught up in the opera’s major dramatic problem – a rather weakly contrived crush Sylvie has on the organizer of the Jackson ride, the strapping, handsome Clayton (baritone Robert Sims). He sees her only as a soldier in the battle against oppression, rebuffs her blurted declaration of love – and the show moves on. 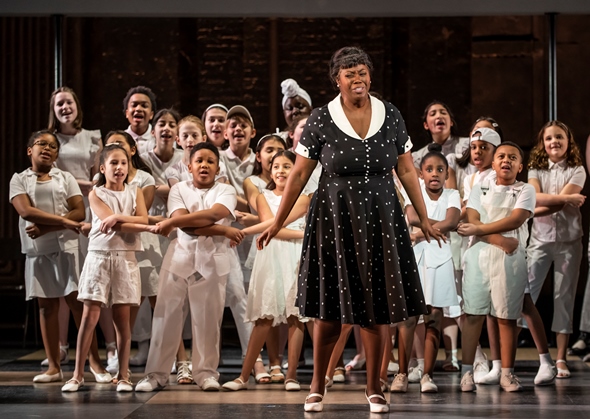 A chorus of children join Sylvie (Dara Rahming) as she struggles with the idea of joining the fight.

Rahming and Sims lead a cast of fine singers, notable among them soprano Kim Jones as Ruby, whose agile voice is complemented by the acting prowess to make us care about this vivacious girl grievously afflicted with asthma. Tenor Tyrone Chambers also turns in a solid vocal performance as Sylvie’s brother Russell, though here, too, composer-librettist Shore dispatches the brother in a sudden dramatic shift that cries out for arc-strengthening argument. Tenor Blake Friedman adds a freshening touch of ethnic comedy as Marc, a Jew who sees the cause as a mirror of his own cultural history.

It’s hard to say what more director Tazewell Thompson might have done to sharpen the opera’s narrative. Where “Freedom Ride” blows thin, it is flimsy stuff, indeed. Thompson’s use of a familiar theatrical device, having actors repair to visible seats at the sides and back of the sparsely set stage at the end of a scene, works well enough. And there’s energy aplenty in the big choruses that proclaim the prospective riders’ resolve to endure whatever suffering may come.

The story gains a resonant jolt of authenticity in tenor Cornelius Johnson’s expansive presence as the Rev. Mitchell, spiritual pillar of the ride campaign. And right at the end, like a descending angel, soprano Whitney Morrison suddenly makes a vocally splendid appearance at the train station – as an annoyed woman of a certain age who doesn’t understand why these young folks are so determined to upset the perfectly tolerable way things are. Morrison took the night’s singing to another level.