For two nights, 18th-century music held sway in a heady parade of Bach, Haydn and Mozart 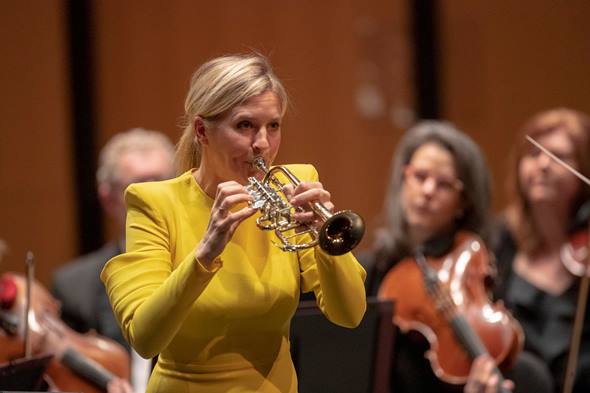 Review: Violinist Rachel Podger at the University of Chicago; Music of the Baroque with trumpeter Alison Balsom at the Harris Theater.

Music of the 18th century came front and center Jan. 24-25 in a sequence of Chicago concerts that spotlighted a solitary violinist in one instance and a small band with a star trumpeter in the other. In programs that worked out unequally, the less satisfying one proved to be as curious as it was outwardly intriguing.

This two-part turning back of the musical clock began with a solo recital by British violinist and Baroque specialist Rachel Podger, who has enlarged the Bach repertoire for unaccompanied violin with transcriptions of his cello suites. Podger’s program in the University of Chicago Presents series included two such cello-to-violin adaptations along with the Partita No. 2 in D minor for Violin – the one that concludes with the prodigious Chaconne.

The next night brought the British trumpet virtuoso Alison Balsom to the Harris Theater as soloist with Music of the Baroque, a classically scaled orchestra and longtime fixture on Chicago’s music scene. Jane Glover, the ensemble’s music director since 2002, conducted the program of Mozart and Haydn. 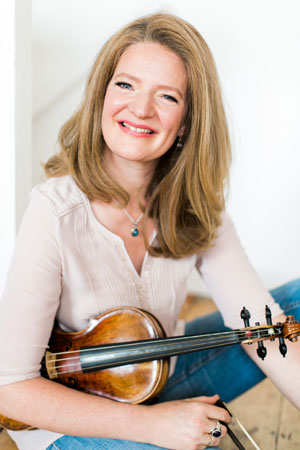 As Podger stresses in her own notes on her translation of the Bach cello suites to violin, these pieces molt – perhaps modulate – into something else when sounded on the much smaller instrument. Not only is the violin’s voice lighter, but its far shorter neck also allows for far greater agility and sheer speed.

The instrumental transfer is accomplished in part by raising the pitch an octave and a fifth; thus Cello Suite No. 1 in G major was lifted to D major for the violin, and Cello Suite No. 3 in C major to G major.

That understood, the question becomes: Does it work – musically, dramatically, emotionally? Well, both suites certainly seemed to fly by under Podger’s assured fingers and quick bow. The wonted depth, resonance, grandeur of the music as we know it on the cello was essentially transmogrified into mercurial ease and brilliance on the fiddle. I wouldn’t call it my new favorite way to hear the cello suites, but I did find the exercise interesting and certainly musical.

Given that musicality, it was surprising to hear it dissipated in the Violin Partita in D minor, whose grand bearing and expressive power seemed to sink within a rather objectified style of playing. Especially mystifying was Podger’s stolid delivery of the Chaconne itself, one of the monuments of Western music. One listened in vain for the movement’s great dramatic pitch, its emotional crisis and transfiguration.

More engaging was Podger’s cleanly articulated and thoughtfully shaped account of Biber’s Passacaglia in G minor (“The Guardian Angel”), written for performance on a violin with unusual tuning, known as scordatura. From the stage, Podger offered a scant, hurried explanation of scordatura tuning. Too bad she didn’t choose to demonstrate the difference. I surmise she did not have a plane to catch; she played an encore.

Music of the Baroque’s concert, with trumpet wizard Balsom, was just the thing to raise one’s spirits above the weather’s prevailing fog, chill and wetness. 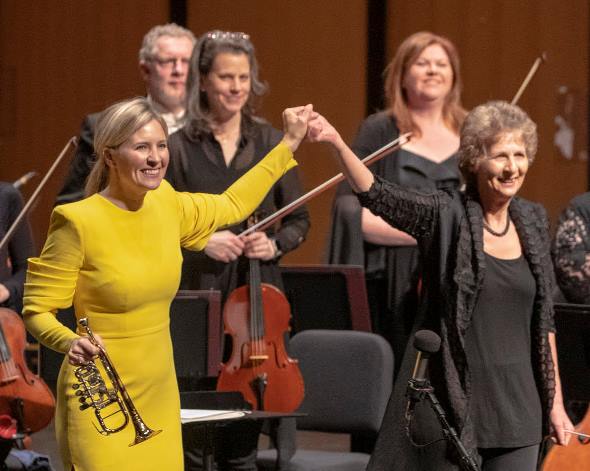 Balsom is a marvel, a virtuoso in every possible sense: technically dazzling, stylistically aware and able to produce a honeyed sound or lightning from her instrument. She played Haydn’s Trumpet Concerto in E-flat, a heady display of what the trumpet could do with a new system of valves added in the late 18th century.

With the Haydn concerto, Glover offered the 30th of his 104 symphonies, a work (subtitled “Alleluia”) of characteristic – and distinctive – wit, imagination and invention. Years ago, in the pre-digital era, Neville Marriner and the Academy of St. Martin-in-the-Fields recorded all the Haydn symphonies that bear such nicknames: a wonderful and amazing reminder of the composer’s inexhaustible genius. I could see Glover, a fine hand with Haydn herself, leading Music of the Baroque some distance down that same charmed path.

This is an excellent orchestra, and its thoroughgoing qualities shone in two Mozart symphonies that opened and closed the concert – Symphony No. 36 in C (“Linz”) and Symphony No. 38 in D (“Prague”).

The festive “Linz” was a bravura treat that handsomely bannered Music of the Baroque’s wind band and its precise, buoyant strings. But the concert’s highlight for this listener was the “Prague” Symphony. Glover’s insightful command of the three-movement symphony’s rigorously constructed first and last chapters placed the “Prague” shoulder-to-shoulder with Mozart’s valedictory “Jupiter.” It was an expert performance, crisp and detailed and sweeping.