Soprano Sondra Radvanovsky as Anne Boleyn, one of three Donizetti queens she portrays in a semi-staged recital at Lyric Opera of Chicago. (Todd Rosenberg photos)

Perhaps the best part of soprano Sondra Radvanovsky’s exhilarating excursion through Donizetti’s Three Queens at Lyric Opera on Dec. 1 is the fact that this remarkable and brave singer will repeat her tour de force – twice. It is an event earmarked not just for enthusiasts of bel canto, but indeed for any operaphile who prizes great drama as the point of great singing. 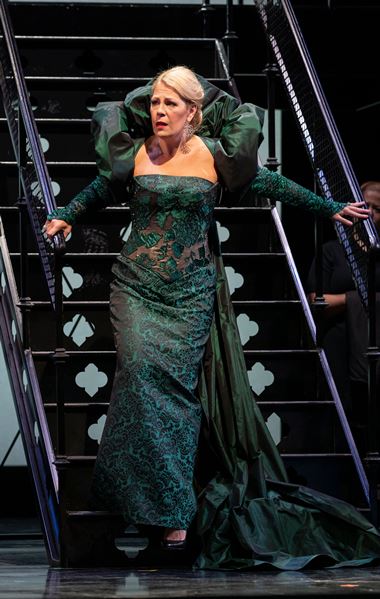 Sondra Ravanovsky as Mary Stuart, or Mary Queen of Scots.

In Radvanovsky’s ambitious semi-staged, richly gowned concert program, the three queens in view are framed in the final scenes from Donizetti’s operas “Anna Bolena,” “Maria Stuarda” and “Roberto Devereux,” the last named for the putative lover of Queen Elizabeth I. Anne Boleyn was the second wife of King Henry VIII, and mother of Elizabeth I. Mary Stuart, or Mary Queen of Scots, was Elizabeth’s cousin and perceived as so great a threat to the English throne that Elizabeth had her put to death on grounds of treason.

Although all three operas end with their aggrieved heroines – two of them facing imminent death – declaiming their misery in grand displays of vocal fireworks, they are quite different women in highly individual circumstances, and the musical delineation of each from each was the glory of Radvanovsky’s performance.  If an eye-popping series of gowns reminded us that we had moved on to another story, another queen, Radvanovsky could have done the whole program in black and still the psychological profiles Donizetti created in these three portraits would have been defined just as sharply.

The conclusion of “Anna Bolena” includes one of operadom’s most compelling mad scenes. Awaiting the headsman’s ax, Anne Boleyn reels under the winds of awful circumstance: that Henry VIII has unjustly condemned her, that he has already proclaimed her own lady-in-waiting, Jane Seymour, as his new wife, and that her sometime lover Richard Percy has opted to die with her.

Radvanovsky came fully to grips with this huge dramatic moment, effectively a soliloquy of sweeping vocal extension and glittering technical display. It wasn’t just the skying top of the musical line that riveted the ear. No less thrilling were the dark plunges as Radvanovsky’s distressed queen careened through her pain and confusion, and her sense of utter abandonment. 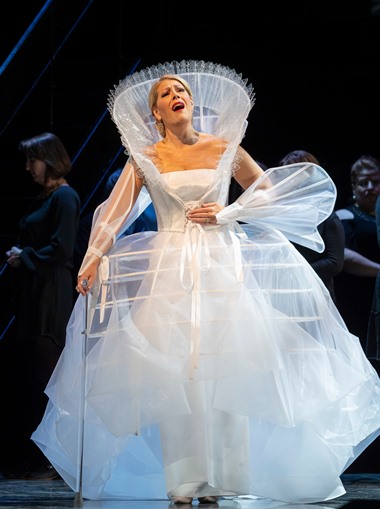 In the concert’s final scene, Radvanovsky portrayed the aging Queen Elizabeth I from Donizetti’s “Roberto Devereux.”

Lyric conferred all the supporting roles in all three operas on current members of its Ryan Center for professional training. And without exception, the young singers acquitted themselves with distinction. For “Anna Bolena,” supporting duty fell notably to tenor Mario Rojas as Percy and contralto Lauren Decker as Smeaton, a court musician swept up in Henry’s wrath.

You have to love willful, defiant Mary Stuart, or Mary Queen of Scots, whether in Schiller’s play “Mary Stuart” – on which Donizetti’s opera is based – or in this flaming operatic portrait. Mary has real claim to the throne now occupied by her cousin Elizabeth; problem is, Elizabeth holds the power and Mary is her prisoner. In a Shakespearean face-down, Mary hurls an epithet at Elizabeth worthy of the Bard himself. She calls her regal captor a “vile bastard.”

All three scenes utilized the Lyric Opera Chorus – three reminders of its excellence under the guiding hand of chorus master Michael Black. And each scene was prefaced by the full overture to the opera at hand, with conductor Riccardo Frizza leading poised performances by the Lyric Opera Orchestra.

Frizza obviously took these snippets seriously. Scene by scene, he provided Radvanovksy and her companions with attentive, dramatically attuned orchestral support that consistently helped to shape the moment.

Radvanovsky’s delicate white gown and high ruff helped with the illusion of an older Elizabeth I.

While the final scene, from “Roberto Devereux,” found Radvanovsky undaunted by either the effort already expended or the burden of Queen Elizabeth’s emotional turmoil as she awaits the execution of her beloved Robert, the staging had one problematic aspect: Elizabeth is by now of a certain age. Director Matthew Ozawa, who fashioned all three scene, tried to convey the queen’s seniority by giving Radvanovsky a cane. And she wore a grand gossamer white gown with a soaring ruff. Without wig or makeup, however, there was an inescapable disjunct between the vigorously healthy blonde singer and the failing queen she portrayed.

Still, Radvanovsky’s finely gauged vocal performance conveyed the full measure of Elizabeth’s grief and exhaustion. She also had plenty of spunk left to vent Elizabeth’s rage at both the Duke of Nottingham (baritone Ricardo José Rivera), who had ensured Robert’s death, and the Duchess of Nottingham (Kathleen Felty), the queen’s rival for Robert’s affection. It set quite a capstone to Radvanovsky’s prodigious enterprise.