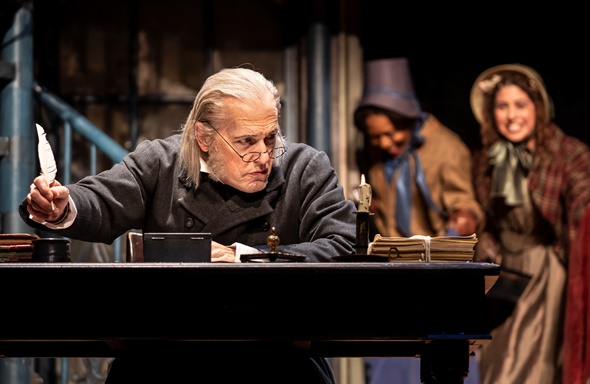 Review: “A Christmas Carol,” adapted from Charles Dickens by Tom Creamer. At Goodman Theatre through Dec. 29. ★★★★

It’s a great story, “A Christmas Carol.” The certainty of that observation is in the wisdom of our ancestors, and it resonates in us. But it’s another thing for a stage representation of Dickens’ poignant morality tale – specifically, Goodman Theatre’s perennial hit – to keep pulling us back year after year: to pick our emotional pocket every 25th of December.

Over the last dozen of the scores of Christmases that Goodman has revisited “A Christmas Carol,” much of the magic surely has centered in the person of Larry Yando.. He has essentially become Ebenezer Scrooge for the faithful thousands who make this Yuletide pilgrimage of wonder and delight and epiphany. 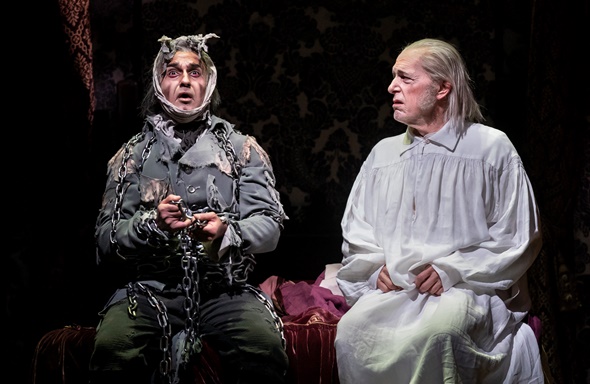 Marley’s ghost (Kareem Bandealy) comes to warn Scrooge (Larry Yando) about the chain of accountability he is forging in his ungenerous life.

How, one might ask, does this veteran, masterful actor manage to rekindle the fire in his Scrooge year after year, as he does again this season perhaps more compellingly and marvelously than ever? I think the answer is the same as it would be for how Yando brought such depth and credibility to King Lear at Chicago Shakespeare Theater some five years ago, or about halfway through his recurrent run as Scrooge at Goodman. The answer is the stuff of great acting: insight, immersion, truth.

Yando’s Scrooge is a true character, a true person. Not real, of course, but true. He is a bundle of human foibles, a man who has closed himself off from the world, one who never really engages his fellow creatures but rather skirts society at its edges. He is a man with a sharp, agile mind, but a constrained heart and a soul as lame as Tiny Tim’s body. This is the Ebenezer Scrooge, fine man of business and crippled human being, that Yando shows us, with most remarkable inflections, time after time. 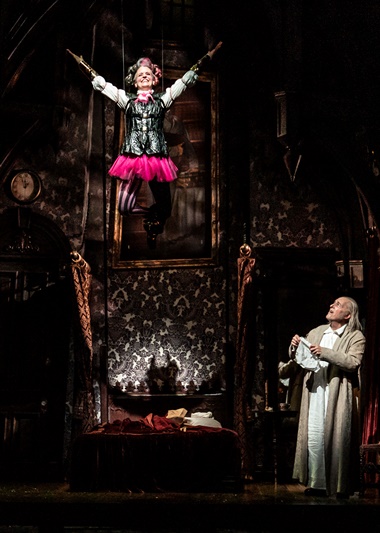 Scrooge (Larry Yando) is astonished to see the Ghost of Christmas Past (Molly Brennan) arrive airborne.

Of course, we want to go see him again. This Scrooge, this heedless misanthrope skulking through life, ever richer but never wiser, is a funny old sinner. Aren’t we all? Do we not sense something of ourselves in his foolishness and his myopia? His “niece” Frida – nephew Fred in Dickens – upbraids him roundly for his obduracy even as she showers him with Christmas cheer. We would like to think ourselves like Frida (the effervescent and quite irresistible Ali Burch).

But it seems likely that Scrooge cannot see past the fact that his beloved sister Fanny died in giving birth to Frida. He is bitter – about everything, about life. He is also ridiculous, and Burch’s dauntless Frida tries to make him see that. In his misanthropy, Scrooge becomes a living caricature; but Yando’s inhabitation of the part does not add another layer of caricature. He plays Scrooge straight, and that’s why he’s as amusing as he is pathetic. Even in the end, in the bedazzlement of his redemption, Yando’s awakened spirit rings of truth. He doesn’t know what day it is, doesn’t know how the spirits managed all this in one night – doesn’t know anything, he confesses with a good laugh at himself.

The reclamation of Scrooge’s soul is a pilgrim’s progress, and Yando plays it cautiously, by reluctant degrees. He resists, almost to the end, until the overwhelming, silent, impassive specter of Scrooge’s future unaltered finally brings the full weight of his situation crashing down upon him. Only then does Yando’s Scrooge crumble and, in effect, prostrate himself before this forbidding signpost of what’s to become of the man he is – or was. Yando’s terrified awakening, both figurative and literal, followed by his euphoria upon discovering that he hasn’t missed Christmas Day, is profoundly human and inescapably affecting. 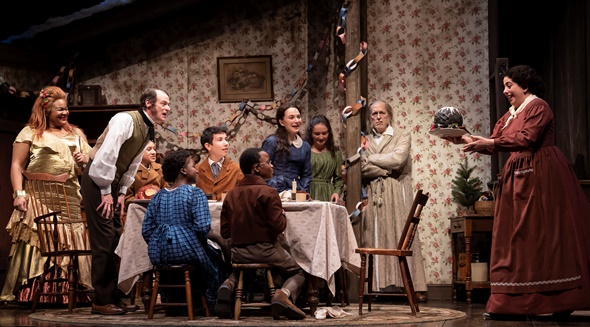 As always, “A Christmas Carol” at Goodman reflects serious theatrical values. The sets are splendid, the costumes flavorful – though I really don’t get the champagne party dress worn by the Ghost of Christmas Present (Jasmine Bracey, who seemed to be only tangentially connected to the role). Molly Brennan’s perky, bounding Ghost of Christmas Past is great fun; and for someone who has nothing to do but stand around mute on stilts while shrouded in yards of black, Breon Arzell cuts an unnerving figure as the Ghost of Christmas Future.

By this time, I suspect returning patrons would miss Kareem Bandealy’s droll introduction to the story – and his “dead as a door nail” bit – almost as much as they would miss Yando himself. Bandealy also does excellent second duty as the chain-bearing ghost of long-dead Marley.

Director Henry Wishcamper adroitly manages traffic control at the busy, crowded and meager household if Scrooge’s clerk Bob Cratchit (Thomas J. Cox). It’s an appealing bunch of kiddies and parents, the most famous of whom, Tiny Tim, is played (for the third year running) by Paris Strickland. Wishcamper gets a great deal right, but he squanders the opening scene possibilities for Scrooger’s long-suffering clerk. There’s delicious comedy to be mined here, but Cox’s Cratchit is more stick than schtick. Humbug, I say. But, unlike Scrooge, I don’t really mean it.