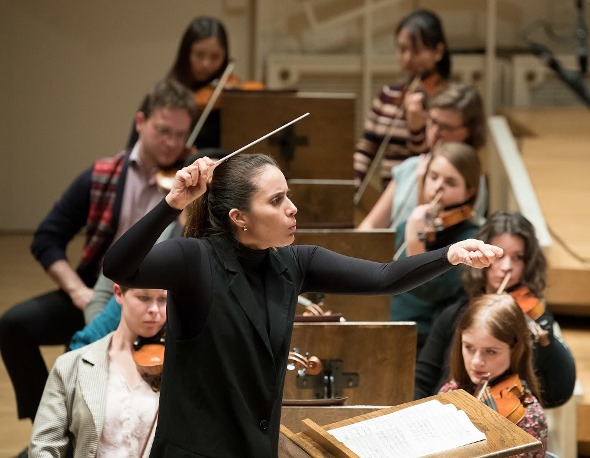 Lina Gonzalez-Granados has been named the fourth Sir Georg Solti Conducting Apprentice. As part of the conducting apprenticeship, beginning in February 2020 and continuing through June 2021, Gonzalez-Granados will spend several weeks each season studying with and assisting Chicago Symphony Orchestra music director Riccardo Muti during his residencies with the CSO.

Additionally, she will have engagements with the CSO’s education and community programs produced by the Negaunee Music Institute, including engagements with the Civic Orchestra of Chicago. Gonzalez-Granados currently holds conducting fellowships with the Philadelphia Orchestra and the Seattle Symphony, and she recently completed her term as a Taki Concordia Conducting Fellow under the guidance of Marin Alsop.

The creation of the CSO International Sir Georg Solti Conducting Apprenticeship was announced by Muti in October 2009 as part of his larger vision for the CSOA when he became music director. This vision includes the opportunity to build on the CSO’s tradition of training young musicians through the creation of an apprenticeship that fosters the talents of promising young conductors and invests in the future of the art form.

The program is named for Sir Georg Solti, who served as music director of the CSO from 1969 to 1991, not only because of his deep connection with the CSO, but also in honor of his commitment to connecting with young musicians.