After a quick, fraught trek, peripatetic pianist picks up Beethoven sonatas where he left off 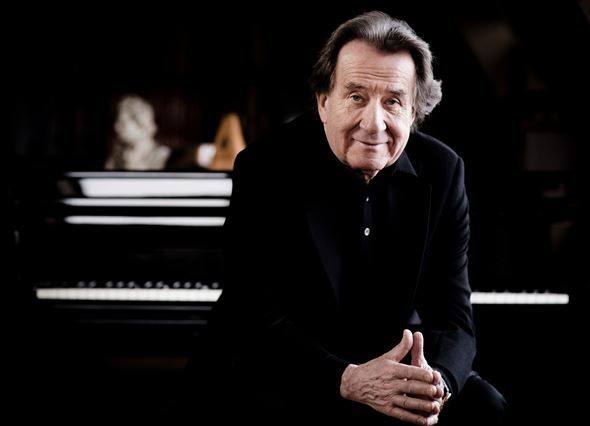 Pianist Rudulf Buchbinder zipped back to Chicago after a performance in New York to give his second recital of Beethoven sonatas on Nov. 10.

If it’s Sunday, it must be Chicago.

Had Rudolf Buchbinder strode to the piano to begin his second Beethoven recital in four days at Orchestra Hall, and mistakenly launched into a Mozart sonata, it might have been understandable – if you knew what the pianist’s previous 24 hours had been like.

The night before his Nov. 10 matinee program of Beethoven sonatas at Orchestra Hall, Buchbinder had played Mozart’s Piano Concerto No. 23 at Carnegie Hall in New York, with the Bavarian Radio Orchestra. And an 11th-hour substitute conductor – Vasily Petrenko, standing in for the suddenly ill Mariss Jansons.

Just another night at the office in the concert world. But Buchbinder will be 74 years old in a couple of weeks. What shape might he have been in when he showed up for his Chicago afternoon of Beethoven’s three sonatas, Op. 10, and the Sonata in E-flat, Op. 31, No. 3?

In a word: fabulous.

And not just great shape, but more like re-composed, settled, expansive: to my mind, all but unrecognizable as the same pianist who had bolted through his entire Beethoven program Nov. 6.

From the outset, Buchbinder’s second round with Beethoven – part of Symphony Center Presents’ season-long journey through all 32 sonatas by multiple pianists – bespoke a commanding musician’s absolute authority in this music, a detailed interpretive embrace evolved over a lifetime of immersion. It was an illuminating experience.

The three sonatas of Op. 10, composed between 1796 and 1798, when Beethoven was in his late twenties, filled the concert’s first half. Buchbinder made it immediately evident how these bold and imaginative pieces might have dazzled Vienna just a few short years after Mozart’s death. The Sonata in C minor, Op. 10, No. 1, begins in the same key and in something like the same portentous darkness that would later charge the Fifth Symphony. The second in the set, in F major, exhibits the mature Beethoven’s concision and his ever-surprising wit.

Buchbinder explored the darkness and underscored the brilliance with sure purpose and deceptively effortless facility. If the listener was having a great time, so was the pianist. He seemed to take impish delight in the very tricks and flourishes that Beethoven, the pianistic toast of Vienna, clearly penned for his own sometimes quite broad amusement. More than once Buchbinder swung off the bench toward the audience even as his left hand polished off a sonata-capping roulade. 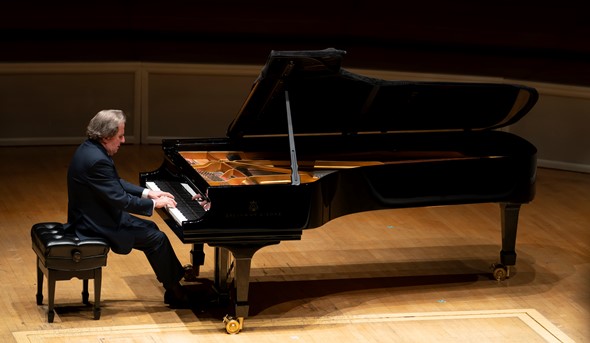 But make no mistake, this was playing of real depth. When Buchbinder came to the last of the Op. 10 sonatas, in D major, his incisive, blazing turn through its Presto opening gave way to an expansive, emotionally complex slow movement as melancholy as Beethoven must have sought when he marked it Mesto (sad). The finale of Op. 10, No. 3, is a virtuosic flight that Buchbinder tossed off with airy ease and crackling effect.

He finished with the formidable and highly unorthodox Sonata in E-flat, Op. 31, No. 3, one of the most often performed among the 32. Cast in four movements, it begins briskly and ends in an absolute tear. The sonata is unusual in that it incorporates both a scherzo and a minuet, though neither quite conforms to expectations. Buchbinder reveled in the rhythmic quirks of those inner movements, and he blitzed through the finale – Presto con fuoco – in a shower of sparks.

The season-long Beethoven sonata project takes a hiatus until March 29 and 31, 2010, when Andras Schiff plays two programs at Orchestra Hall. Meanwhile, Riccardo Muti, the Chicago Symphony Orchestra’s music director, resumes his cycle through Beethoven’s symphonies with performances of the Second and Fifth the weekend of Feb. 20-23, 2020.