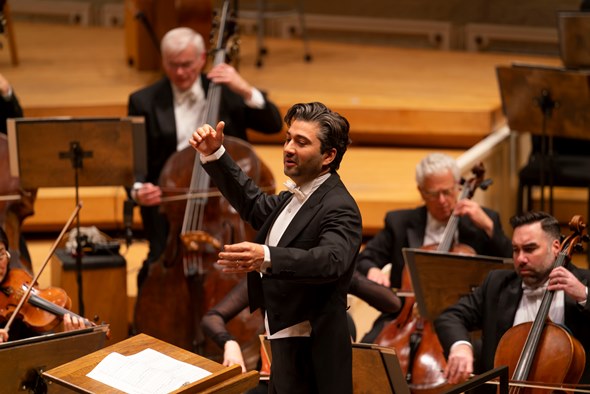 David Afkham, German born and 36 years old, has the look of a conductor on a straight line to an eminent place in the world. I still remember his appearance with the Chicago Symphony Orchestra three years ago when he led a tremendous Shostakovich Tenth Symphony and, hardly less impressive, collaborated with Emanuel Ax on an exquisite performance of Beethoven’s First Piano Concerto.

Afkham just wrapped up his sequel to that visit, this time without a soloist – this time with a program of core orchestral repertoire: Haydn’s Symphony No. 44 in E minor (“Mourning”), Richard Strauss’ “Death and Transfiguration” and Brahms’ Symphony No. 3. Whatever questions might have lingered about this young conductor were answered in spades. Together, Afkham and the CSO were spectacular. 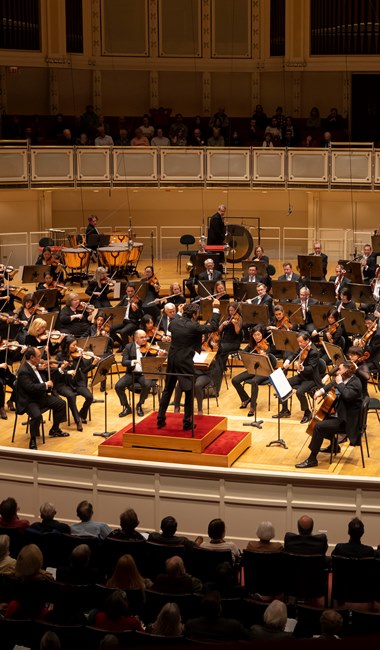 Conductor David Afkham made the most of Strauss’ orchestral palette.

I’ve never known a conductor who didn’t harbor a deep respect and love for the Haydn symphonies – the whole lot of them, more than a hundred, endlessly imaginative, sophisticated and surprising. And mercilessly transparent. Afkham served up the 44th with an ensemble reduced to chamber proportions, an agile, polished crew that responded with playing of tensile strength and silken finish.

The 44th Symphony takes its “Mourning” sobriquet from Haydn’s wish that the slow movement might be played at his funeral (which didn’t happen). It is not the overt lamentation one might expect, but rather wistful – in Afkham’s hands quite animated, aspiring and at the same time radiant. The conductor infused the entire symphony with an earthly life closely connected to the spiritual one. The CSO’s sunny performance exuded charm, wit and perfect stylistic poise.

Strauss symphonic tableau “Death and Transfiguration” flooded the stage with an army of musicians: woodwind fusiliers, a phalanx of strings, a battery of brass and percussion. And indeed, Afkham marshaled these forces into earthshaking sound – when it served to do so. But Strauss was a master of orchestration unsurpassed even by Ravel, and his grand requirements for “Death and Transfiguration” do not provide a bludgeon but rather a palette.

Afkham applied his Straussian resources deftly, capturing the composer’s mortal portraiture with fine brushstrokes of woodwinds balanced against gentle strings, the strings in turn laying down an eloquent through-line for this narrative of transition and transcendence. Where Strauss calls for the grand gesture, the full force of gleaming brass and storming winds, Afkham let it rip. The CSO’s company of horns, trumpets, trombones and tubas is not a modern legend for nothing. 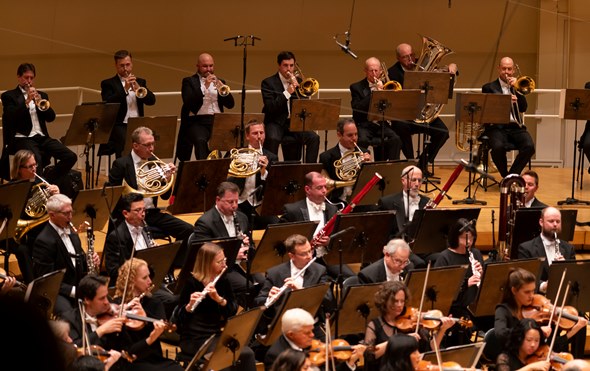 After the intimacy of Haydn, music of Strauss brought the CSO’s full forces to the stage.

But perhaps the payoff came with Brahms’ Third Symphony, a work that seems to harken back directly to Haydn. It’s an intriguing concept of a symphony, almost willfully anti-heroic, a sort of big-boned serenade. Just as conductors harbor a universal love for Haydn, there’s surely a consensus that, of Brahms’ four symphonies, the Third is the most beguiling, and deceptively challenging.

Afkham led an exquisite performance that blended Brahms’ predominantly sparkling lyricism with moments of stunning power, all of it cast in playing of lustrous beauty. The crux and heart of the Third Symphony lie in its middle movements, neither one quite a scherzo and both playing out at gemütlich leisure. Afkham drew eloquent playing from the French horns and certainly from principal clarinet Stephen Williamson.

Unlike the symphonies of his model Beethoven, indeed unlike his other three essays in the form, Brahms’ Third ends not in grandeur but in a sigh, as if in resignation or perhaps complete contentment. Afkham built toward that quiescent gesture through a movement of assured restraint, the mark of a conductor who trusts the score. The orchestra’s performance of virtuosic understatement was not lost on an audience that roared its appreciation as if the night had ended in a pyrotechnical blaze.