Baritone Christian Gerhaher and pianist Gerold Huber performed songs of Mahler in a recital Oct. 25 at the University of Chicago. (Adrián Mandeville for UChicago Presents)

It was as near the alpha and omega of voice recitals as might be encountered in a span of less than two days: baritone Christian Gerhaher in an all-Mahler program with pianist Gerold Huber, followed by countertenor Iestyn Davies singing mainly Renaissance and Baroque fare with the British viol consort Fretwork, both at the University of Chicago. Though worlds apart by any reckoning, the one was as magical as the other. 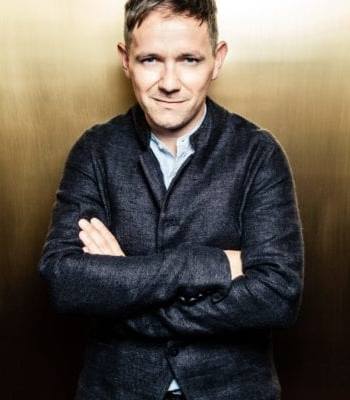 Both concerts were part of this season’s University of Chicago Presents series, and both were given in the acoustical warmth and spatial intimacy of Mandel Hall on the university campus.

Gerhaher and Huber, who have performed together continuously in a broad stream of recordings and international tours since their student days some three decades ago, have Mahler down beyond the point of comfort and fluency. What they brought to three groups of songs Oct. 25 was Homeric story-telling, raw and earthy, beautiful in the theatrical sense of emotion unbound and honest.

It became instantly apparent with “Lieder eines fahrenden Gesellen” (Songs of a Wayfarer) that Huber’s absolute mastery of the piano voice would remove any wish for the orchestral setting of these four well-known songs. In a great lyrical arc, the first-person verses express the anguish of a young man fleeing from the painful reality that his true love is about to marry someone else.

Gerhaher essentially became that desolate soul, and he dared to subvert luscious sound with the angst of one who feels a hot dagger in his breast. But when, in the final song, the vocal line rises with sublime melancholy, Gerhaher summoned a quality at once transparent and effortless. 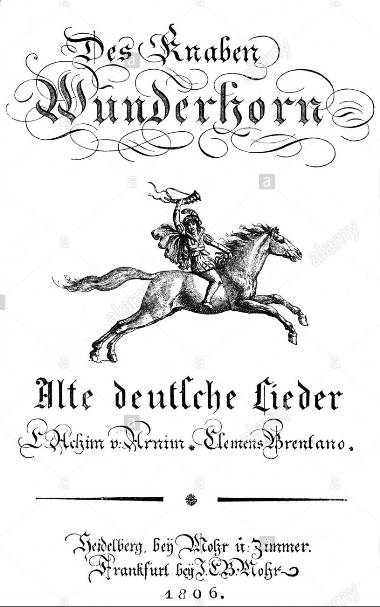 Cover of the anthology of German folk poetry collected by Clemens Brentano and Achim von Arnim and published in 1806 under the title “Des Knaben Wunderhorn” (The Youth’s Magic Horn) .

At the recital’s far end, pianist and singer arrived at the bleak landscape of “Kindertotenlieder” (Songs on the Death of Children), five settings of poems by Friedrich Rückert evoking the emptiness, the numbness, the guilt of a parent who has lost the familiar presence of a child. Gerhaher captured not just the emotional void, but also the tenderness and the heart-crushing remembrance of a father whose gaze once would go instinctively to the place beside his wife – or who wonders how it might be had he made a different choice.

Between these clusters of deep Mahlerian shadows, Gerhaher and Huber offered a generous breadth of selections from “Des Knaben Wunderhorn” (The Youth’s Magic Horn), folk poetry that Mahler continued to set far into his career as composer and conductor. No small factor of the magic here sprang from the orchestral efficiency of Huber’s keyboard.

Gehaher delivered each song with equal parts of practiced authority and spontaneous naturalism – from the wry wit of “Wer hat dies Liedlein erdacht?” (Who thought up this little song) to the open-hearted charm of “Rheinlegendchen” (Rhine legend) and the ghostly sorrow of “Wo die schönen Trompeten blasen” (Where the beautiful trumpets blow). All told, the recital was a rare and beguiling treat.

Where Gerhaher presented a figure and voice elemental and unvarnished, Iestyn Davies in his Oct. 27 recital with Fretwork was a study in calm and lustrous precision. It was very much a shared program, singer and consort taking turns in the spotlight, the one as polished as the other in a program dominated by Renaissance music of quiescence and poise. 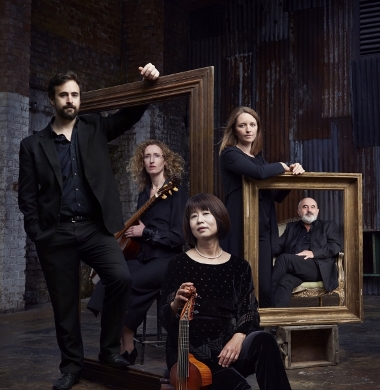 In William Byrd’s rhapsodic setting of “My mind is a kingdom,” a celebration of the human spirit transcendent, Davies displayed a voice of controlled purity that would stamp every song in his unfolding program. In a sense, Purcell’s “O Solitude,” delivered with an aspiring quality of intellectual separation, bespoke the same spiritual philosophy as Byrd’s soliloquy.

To these and to Vaughan Williams’ “The Sky Above the Roof,” a rumination on the merit of a life spent, as well as Gesualdo’s “Sparge la morte,” a poetic conceit of Jesus’ death on the cross, Davies’ brought an interpretive directness matched by a crystalline sound of unshakable strength and focus. He capped his  program with a searing, exquisitely ornamented turn through Cleopatra’s aria “Piangero la serte mia” from Handel’s opera “Giulio Cesare.”

Ever the solidly supportive backup group to Davies’ airs, Fretwork – an ensemble of five viols spanning the range from soprano to bass – also had ample opportunity to showcase its own virtuosity in assorted fantasies by Gibbons, Lawes and Purcell. The group’s impeccably integrated sound afforded the most pleasurable reminder of music lamentably pushed to the periphery of the modern concert world.