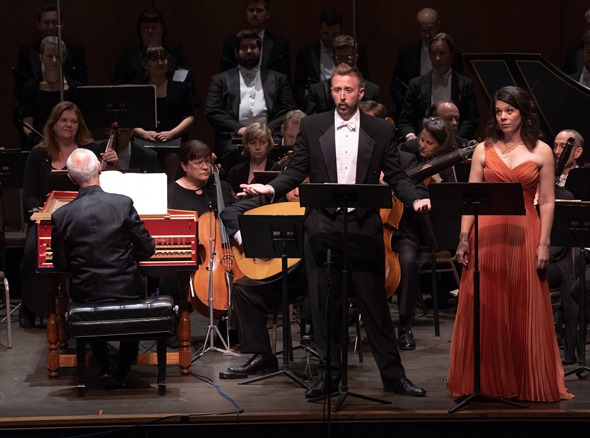 Review: Music of the Baroque Orchestra and Chorus, with guest soloists, conducted by Nicholas Kraemer. At the Harris Theater.

The only thing lacking in Music of the Baroque’s clever and far-bounding concert pitched around the hunt Oct. 22 at the Harris Theater was the valkyrie Brünnhilde’s lusty “Hojotoho!” It would have fit right in with this multifaceted celebration of the thrill and glory of pursuit. 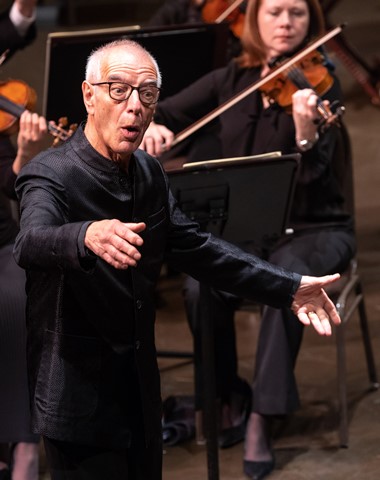 With principal guest conductor Nicholas Kraemer providing crisp leadership as well as droll spoken commentary, Music of the Baroque’s disciplined little band, its chorus and four vocal soloists worked their way through pieces that engaged the idea of the hunt literally (Bach’s Cantata No. 208) or indirectly (Haydn’s Symphony No. 73) or figuratively (Caesar’s calculating aria from Handel’s opera “Giulio Cesare”).

Bach’s “Hunt” Cantata, as Kraemer dryly observed, begins smack on topical point, with the mythical huntress Diana extolling the delights of the chase, only to shift early from hart to heart and to, well, lionizing a local prince.

Mezzo-soprano Allyson McHardy, as Diana, matched the French horns’ rolling fanfares with her own coloratura flourishes, and joined with tenor Ryan Townsend Strand – as the goddess’ marginalized lover Endymion – in an extended duet as bright as it was theatrically smart. Baritone Keven Keys added his darkly appealing voice as Pan in yet another paean to that much-loved prince. 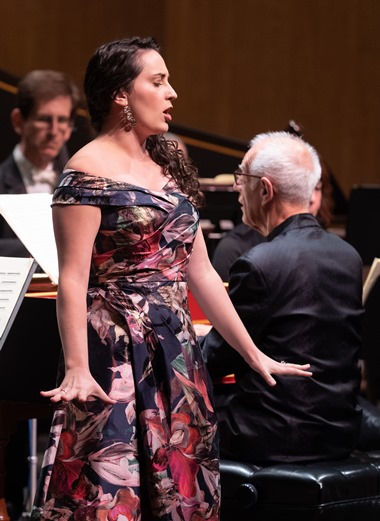 But it was soprano Véronique Filloux who drew the cantata’s familiar hit tune, “Sheep may safely graze” – in a land where a good shepherd watches over them, where rulers govern well. (Remember, this was long ago and far away.) Filloux imbued the aria with infectious buoyancy and joy.

The evening’s musical hunt leaped into the French Baroque with two scenes from Rameau’s opera “Hippolyte et Aricie.” While the king of Athens is away, his wife Phèdre falls in love with Hippolyte, the king’s son by a previous marriage. What ends very badly in the original myth is resolved quite happily in Rameau’s opera, with Hippolyte marrying his true love Aricie.

In the episode heard here, Hippolyte makes only the briefest appearance. At center stage is the conscience-stricken Phèdre  (McHardy), who wrongly believes her young lover has been slain and that she is to blame. McHardy’s long, majestic monologue, agonizing and vocally splendorous – and delivered from memory – was a highlight matched only by her Handel aria still ahead. 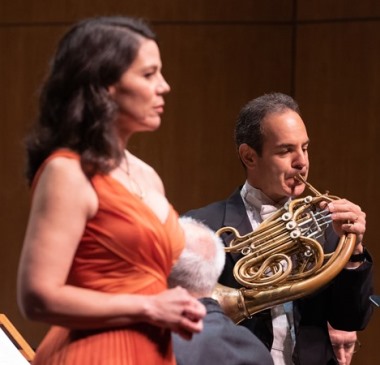 To be sure, this imposing Phèdre was marvelously counterpoised by Filloux’s agile singing as both Aricie and a huntress who exhorts all of strong heart to throw themselves into the chase. Music of the Baroque’s small but highly effective chorus hit its mark here as it had done in the “Hunt” Cantata.

Last on the program’s vocal portion came the wily Caesar’s aria measuring Cleopatra’s dangerous brother Ptolemy, who has presented himself (to invoke Lady Macbeth’s imagery) as the flower but is in fact the serpent under it. Handel’s entire aria is closely tracked by solo horn, and in huntsmen’s terms, principal horn Oto Carrillo proved to be an expert tracker. McHardy and Carrillo treated their large and zealous audience to a doubly dramatic and virtuosic turn.

Kraemer, ever the astute musical guide, finished off the program with a stylish account of Haydn Symphony No. 73 in D (“The Hunt”), a performance as vital and elegant as it was brilliant and sly. This is music of unforgiving transparency, and Kraemer’s ensemble showed, musician for musician, that it could turn Haydn’s pliant and exacting gestures into wit without words. It made for a fine ending to an invigorating romp through 18th-century woods and meadows. Hojotoho, indeed.