‘The Brothers Size’ at Steppenwolf: The lyrical storm, and heartache, of unconditional love 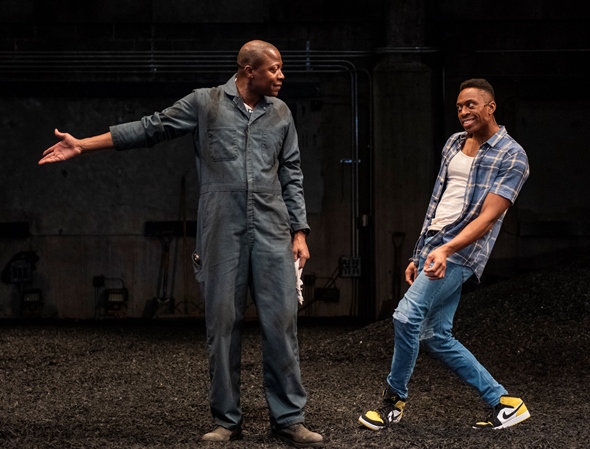 The sleeper don’t-miss show of Chicago’s autumn theater season falls under the perhaps inauspicious heading of Steppenwolf’s Young Adult series. Make no mistake, the emphasis here is on “adult,” and Steppenwolf’s superbly cast and directed – indeed, choreographed – staging of Tarell Alvin McCraney’s “The Brothers Size” is exquisite theater that will reward the most experienced drama buff. 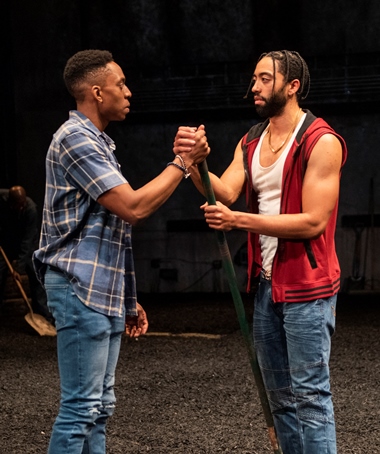 While Steppenwolf devises its perennial Young Adult offerings specifically for Chicagoland schools, with lots of daytime performances that are well attended, the company addresses these shows as seriously, as ambitiously, as it does everything else in its season. I will never forget the searing production of Arthur Miller’s “The Crucible” mounted in the YA series two years ago.

“The Brothers Size” lies worlds away from “The Crucible,” that mirror image of McCarthy-era political hysteria draped in shrouds of the Salem witch trials. McCraney’s play is about the here-and-now, or more pointedly the daunting present for black people in America. But it also transcends that realty as a portrait of brotherly love – not figurative or cosmic but literal, the bond of blood and spirit between two brothers.

Ogun Size is the older one: serious, hard-working, concerned for his crazy kid brother Oshoosi, who is recently released from prison, in love with life and unimpeded by the precept of thought before action. Ogun works on cars at the shop he owns. Oshoosi works at having a good time. He pals around with Elegba, a dubious character Oshoosi met in prison. Elegba’s free-wheeling style is not what Oshoosi needs just now, but it’s a lot more fun than Ogun’s sober option. Oshoosi goes for the shiny object of adventure.

The arc of “The Brothers Size” is a bit like an action movie that plays out as one long chase. Across the length of the play, Ogun strives to rein in his wild, lovable little brother – and Oshoosi keeps talking the talk of reform while dancing the dance with the ever-present Elegba. It’s really very much of a dance as Oshoosi two-steps around Ogun’s strictures and leaps into the fantasy of Elegba’s shenanigans. At times, by twos or by three, the characters strut and bound and weave in the choreography of their passions. 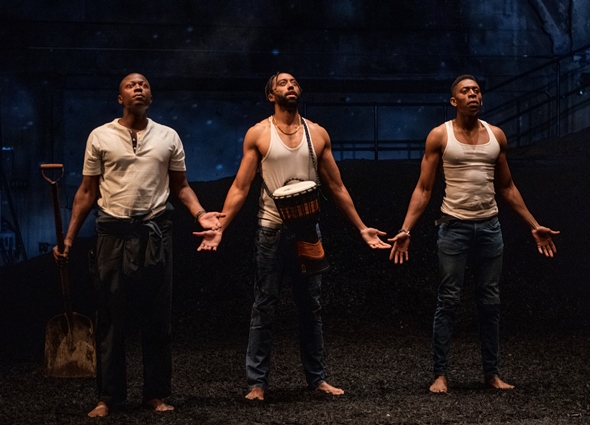 Choreographed, stylized movement plays an expressive role in “The Brothers Size” at Steppenwolf.

As the brothers, mutually devoted if endlessly contending, Manny Buckley’s determined, long-suffering Ogun and Patrick Agada’s infectiously charming Oshoosi make a marvelous pair. If we can’t help submitting to Oshoosi’s blithe spirit, neither can Ogun, who’s driven to distraction by his brother’s mindless missteps but who can also crumble like a cookie when he looks upon that sunlit smile. In what is perhaps the play’s most disarming turn, Ogun asked Oshoosi to sing a favorite song from the old days, from when they were young and, one senses, innocent and hopeful. Agada’s still-not-grown-up Oshoosi indulges his brother with a song and dance to melt stone.

But the plain, pounding truth is that all is not well. Oshoosi just can’t stop shooting himself in the foot. And Ogun can’t understand why this young fool won’t see how he’s throwing his life away. Oshoosi’s sleep-in attitude invokes the notion that play is the work of children. He can’t help himself; he doesn’t see the point in Ogun’s endless labors. Oshoosi only has eyes for the excitement embodied in his ex-prison mate Elegba (the slyly enticing Rashaad Hall), who turns the impressionable lad away from Ogun’s worthy example and down the road marked Disaster. 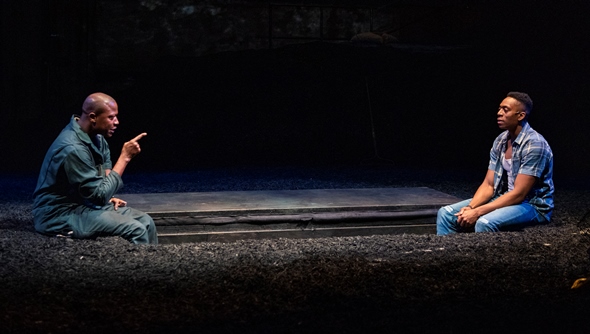 Ogun Size (Manny Buckley) tries to get his serious message across to Oshoosi (Patrick Agada).

“The Brothers Size,” its essence sharpened by Yu Shibagaki’s bleak minimalist set, is heart-breaking, but it is not tragic. It’s not a story of tragedy, but of love, unconditional and sacrificial. The love of parents for their children, even when children are more needy and narcissistic than aware. That is Oshoosi: heedless, oblivious, needful though he can’t see his own need.

But Ogun sees it. And he acts on it at great pain and personal loss. Buckley plays that last dramatic card with wrenching conviction, absolute truth. Agada’s Oshoosi is a lovely flitting butterfly. Yet it is Buckley’s iron-willed man of mortal tenderness who gives this beautiful production wing.

A word about the language in this play so well slotted for young adults. It’s not for the kiddies. F-variants rule the dialogue, but with poetic, lyrical naturalism. This is the lingua franca of the world of the brothers Size. The patois can be very funny, but it is always keenly expressive. I can’t imagine clearer exasperation than rattles home in Ogun’s unbridled rant at Oshoosi: “You messed up, you messed up, you messed up.” Maybe twenty times over. He doesn’t say messed up, of course. He speaks from his innermost despairing heart.