‘Luisa Miller’ at Lyric Opera of Chicago: Verdi rarity is a happy augury for Mazzola era 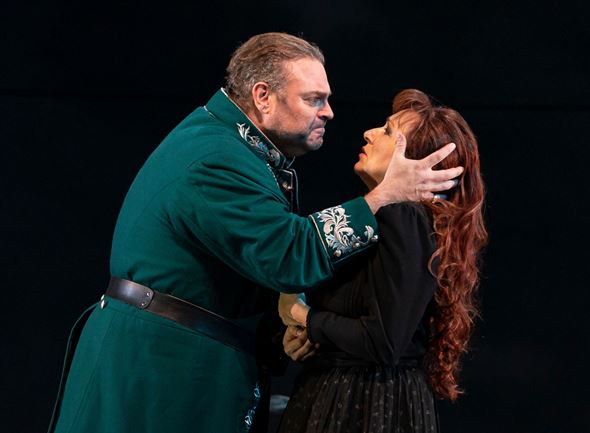 Review: “Luisa Miller” by Giuseppe Verdi, at Lyric Opera of Chicago through Oct. 31. ★★★

We shall see, when Lyric Opera of Chicago comes under the musical leadership of Enrique Mazzola in 2021, how he will pursue the plan of departing music director Andrew Davis to explore the early, less familiar operas of Giuseppe Verdi. The idea has merit, and I think Mazzola will bring it off with aplomb. There are signs to support that probability in the example immediately at hand: Verdi’s “Luisa Miller,” which Mazzola himself conducts with spirit, insight and evident belief in the opera’s worth.

“Luisa Miller” brings the Spanish-born Italian conductor to the Lyric pit for the third time since his debut in 2016 with Donizetti’s “Lucia di Lammermoor.” Mazzola, now 51 years old, returned two seasons later to lead Bellini’s “I puritani.” In retrospect, both of those occasions pointed to his promise as Lyric’s new chief conductor. Mazzola’s elegant, wholly authoritative way with “Luisa Miller” clinches the case: Lyric general director Anthony Freud has made a choice that’s more than auspicious; it is very exciting. 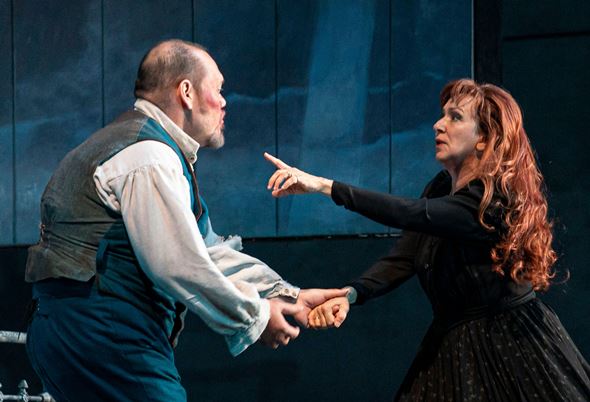 Even before the opening night curtain rose on “Luisa Miller,” Mazzola had orchestra and audience both in hand through a propulsive, sharply articulated overture that showed an eager rapport between the pit band and its director-designate.  The orchestra sounded terrific. When the music stopped, the curtain still in place, the house erupted in a boisterous ovation that rang of “Hey, this is our new guy. This is going to be really good.”

Mazzola then set about making a really good case for “Luisa Miller,” a musically beguiling opera that falls a dozen or so works into Verdi’s career – after the likes of “Nabucco” and “Macbeth” and just ahead of the three operas that catapulted the composer into blazing fame: “Rigoletto,” “Il trovatore” and “La traviata.” At once a mashup of timeless tragic love tropes – think “Romeo and Juliet” – and a foreshadowing of great Verdi operas to come (“Simon Boccanegra” and “Otello,” for example), “Luisa Miller” tugs at the heart even if in the end it also tests patience.

Luisa is the young daughter of a successful villager. She’s in love with Rodolfo, the son of a Count, though he hides his noble birthright from her. But the Count has his own, more beneficial marriage plans for Rodolfo. Meanwhile, a rough fellow called Wurm, who once conspired with the Count in some desperate business, has his own designs on Luisa. Her father, too, disapproves of her relationship with Rodolfo – initially because of her innocence and vulnerability, later because the discovery of Rodolfo’s high station prompts concern over the lad’s real intentions. 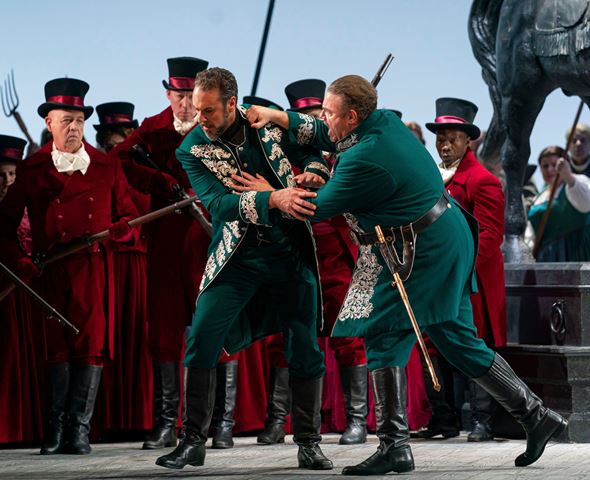 The Count (Christian Van Horn, left) and his son Rodolfo (Joseph Calleja) clash over the young man’s wish to marry a commoner.

When the Count and Wurm take extreme measures to make Luisa and Rodolfo believe each has betrayed the other, events plunge swiftly toward a tragic conclusion. Well, the plunge is swift; the conclusion is rather dragged out, reminding one that by the time he got around to “La traviata,” Verdi had become much more efficient at death scenes.

The pairing of soprano Krassimira Stoyanova as Luisa and tenor Joseph Calleja as Rodolfo makes vocal magic, even if both of those superb veterans are generation-challenged for their basically Romeo and Juliet roles. Still, it works dramatically. Calleja displays a silvery, expressive voice and Stoyanova complements her agile, effortless singing with physical grace as a stage actor whose only equal in view is baritone Quinn Kelsey as Luisa’s father. 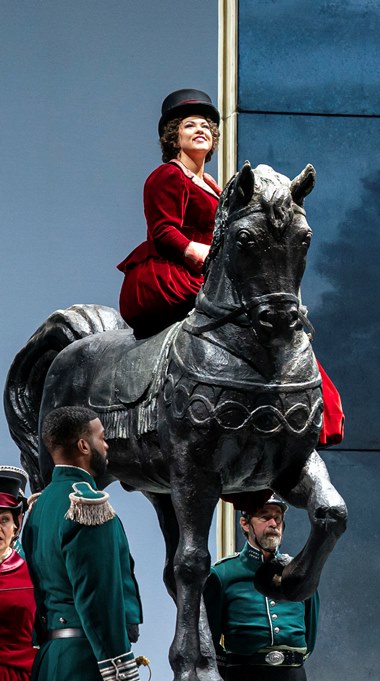 The Duchess Federica makes a spectacular entrance on her lofty mount.

Kelsey brings another well-tested presence to this solid ensemble. His powerful voice seems to swell from the heart, and the emotionally charged scenes between the worried old man and his love-struck daughter – foretelling Rigoletto and Gilda – bear Verdi’s ineffable stamp of truth.

If the self-serving Count and his co-conspirator Wurm – imposingly sung by Christian Van Horn and Soloman Howard, respectively – seem pulled from the shelf of stock characters, they also point toward more specific Verdian portraits to come.

An unexpected delight in this production is the straw persona of Federica, a duchess and the wealthy prize the Count has in mind for Rodolfo. Federica, who arrives on a statuesque horse of heroic proportions, is sung with voluptuous beauty by mezzo-soprano Alisa Kolosova.

Mezzo-soprano Kathleen Felty, a first-year member of Lyric’s Ryan professional training center, likewise reminded one that there are no minor roles on the stage with her luminous, richly voiced moments as the peasant girl Laura.

The Lyric Chorus, smartly tricked out in burgundy hunting attire and top hats, performed up to its typical high standard – though director Francesca Zambello’s decision to freeze the chorus in silhouette tableaux pulled the eye away from the action and solo singers. An equally odd directorial choice came right at the top, with Wurm tip-toeing around in the sleeping Luisa’s bedroom the morning of her name-day. He drops a greeting card on her pillow and blows her a kiss. Really?

All other charms of the occasion aside, it’s worth catching “Luisa Miller” just to witness the work of Mazzola, a masterly conductor with an evident theatrical sensibility. He brings shining promise for the near future at Lyric Opera.