‘A Doll’s House’ at Writers: Ibsen condensed
to a suffocating essence, bursting with breath 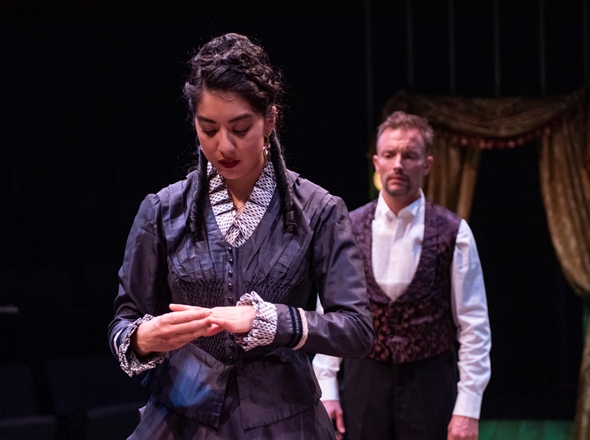 Nora (Cher Álvarez) is stunned by the tongue-lashing she receives from her morally outraged husband Torvald (Greg Matthew Anderson). (Photos by Michael Brosilow)

Review: “A Doll’s House” by Henrik Ibsen, adapted by Michael Halberstam and Sandra Delgado, at Writers Theatre through Dec. 15. ★★★★★

The 90-minute distillation of Ibsen’s “A Doll’s House” now on display at Writers Theatre is a fast ride to a shattering finish – an emotional grinder that goes instantly and unflinchingly to the core of this still-remarkable story of a woman’s painful self-discovery, and it never lets up.

We can’t really declare this streamlined version, fashioned by Writers artistic director Michael Halberstam a few years back for another theater company and now embellished by playwright Sandra Delgado, “A Doll’s House 2.0.” Lucas Hnath has already given that title to his speculative sequel about Nora Helmer’s reappearance at the doorway of the home, husband and children she leaves at the end of Ibsen’s play. Perhaps, then, “A Doll’s House 0.2” – sweated to its essence. 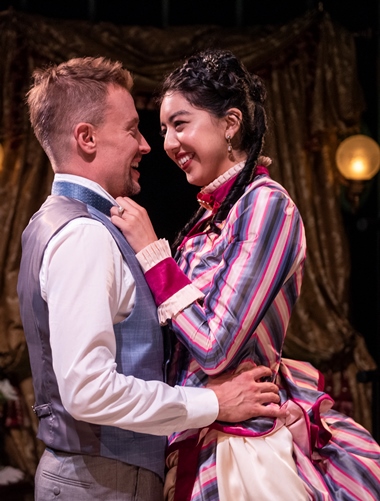 Torvald (Greg Matthew Anderson) is delighted by the charms of his wife, his “little squirrel” Nora (Cher Álvarez).

Such a bold reduction of a mainstay of classical theater takes a certain amount of chutzpah, and it’s undertaken at no small risk to the original. But loss or compromise is far from the issue here: This is brilliant, focused, compelling and convincing work, no less by the acting company and director Lavina Jadhwani than by Ibsen’s helping hands Halberstam and Delgado.

Cher Álvarez is heart-breaking as Nora, the perfect 19th-century woman of beauty and means who is passed from father to husband as a delightful ornament to the life of the former, then the latter. Not allowed to earn her own money, never even considered as an intellectual companion, Nora is the “little squirrel” who amuses her husband Torvald. She’s the mother of his three children, a naughty little birdling who must indulge her passion for macaroons in secret, lest Torvald discover her transgression and scold her with a wagging finger, though maybe also with a forgiving smile.

But Nora harbors a considerably larger secret, and thereby hangs this tale of marital posturing in the mirror of middle class propriety. Nora has forged a signature on an illegal loan – illegal because women couldn’t apply for loans. Torvald (the wondrously and delectably pompous and narcissistic Greg Matthew Anderson) finds out. Never mind what he also learns; that’s completely beside the point. The crisis isn’t about Nora’s noble and selfless act: It’s about appearances, what people will say, the utter violation of moral rectitude. 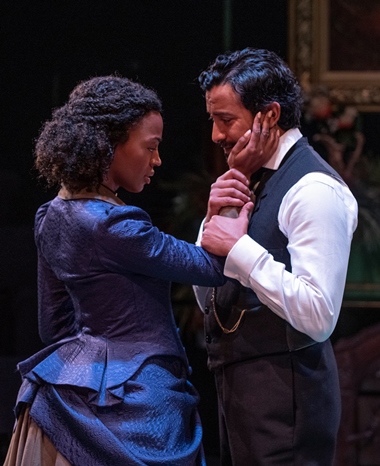 Nora’s friend Christine (Tiffany Renee Johnson) and the shadowy Krogstad (Adam Poss) have a history together.

The trashing to which Torvald subjects Nora when he’s confronted with her incomprehensible offense, his protracted and vituperative rant, is one of the indelible scenes in the history of theater. And Anderson delivers it with all the righteous indignation of a man whose life has just been destroyed by this silly goose now speechless before him – this unworthy woman who certainly can no longer be trusted with the upbringing of his children, lest her depravity infect them like some airborne virus.

In truth, Nora, this seeming air-head who has for her entire life presented the dutiful aspect of a female incapable of thinking or acting seriously, much less daringly, has done something driven by extraordinary courage and devotion. She seeks nothing in return – neither credit nor praise, nor even gratitude – except the happy result. This is, of course, authentic virtue set in contrast to the endemic hypocrisy of the society Ibsen is excoriating.

While Torvald is the same man at the end that we see at the outset, Nora makes a full turn that must be credible if her final exit is to be plausible. Álvarez has Nora down to subtle inflections: the absurd macaroon deceit at the start, her concern for a widowed friend (affectingly played by Tiffany Renee Johnson) in desperate need of a job, her frantic efforts to prevent Torvald from discovering her benevolent transgression. 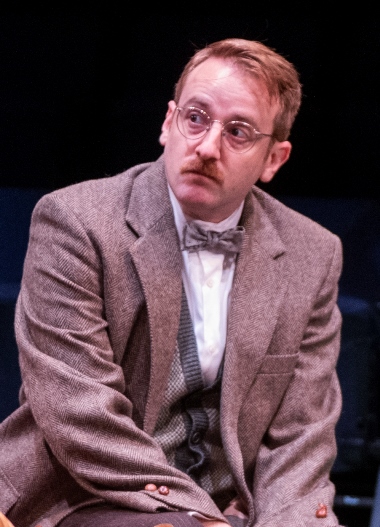 Amid all this, we must also see Nora’s rising awareness that she is not the stuff of motherhood. She readily hands off her three children to the care of her housekeeper-cum-nanny (Amy J. Carle). Álvarez conveys both the ennui and the guilt of a still youthful mother who is perhaps unconsciously looking for a way out of that suffocating role.

Two other men complete Ibsen’s portrait of warped domesticity. An agitated but shadowy figure (Adam Poss, who vividly invokes both qualities) holds some sway over Nora. A terminally ill doctor, an old friend of both Nora and Tovald, is staring at a premature exit from this world. Bradley Grant Smith’s sympathetic, indeed radiant, performance lends exquisite texture to this tightly threaded tapestry. The doctor’s sad resignation perhaps serves as metaphor and impetus for Nora’s ultimate decision to hurl herself not into death, but into the embrace of a real life.