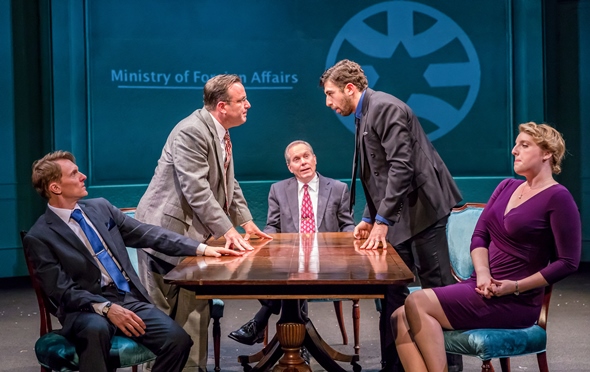 Are tensions high? The two men squaring off over the table are both Israeli negotiators (played by Stef Tavar, left. and Jef Feder). (Brett Beiner photos)

Review: “Oslo” by J.T. Rogers, co-produced by TimeLine Theatre and Broadway in Chicago, at Broadway Playhouse thru Oct. 20. ★★

One might describe J.T. Rogers’ “Oslo” as a historical feel-good play, the historical happy outcome of which didn’t last very long. It’s a process drama that depicts the secret (verbal) slug-out in 1993 between representatives of Israel and the Palestine Liberation Organization in a valiant effort to bring peace to the Middle East. The production created by TimeLine Theatre and co-produced by Broadway in Chicago is tightly wound and well acted, but it cannot escape the play’s strait-jacketed narrative or rise above the fact that none of this feels especially compelling a quarter-century on. 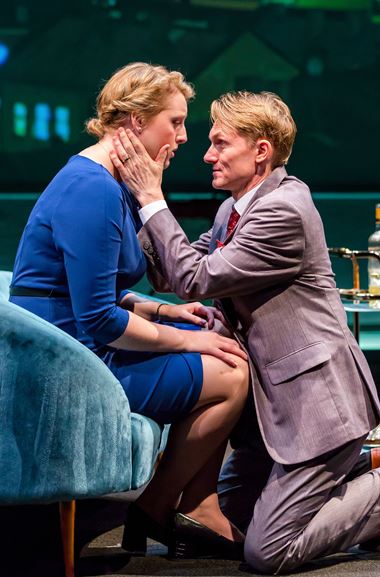 In a rough patch, founders of the talks Terje Rod-Larsen (Scott Parkinson) and his wife Mona Juul (Bri Sudia) resolve to keep going.

“Oslo” brings two other plays instantly to mind: Rogers’ own “Blood and Gifts,” which deals with the CIA’s clandestine efforts to support the Afghans in their bloody conflict with the Russians in the 1980s, and Lee Blessing’s “A Walk in the Woods,” a sort of ruminative sidebar to U.S.-Russia nuclear disarmament talks in the early ’80s. TimeLine has staged both of those plays quite effectively in recent years. All three have been directed by Nick Bowling.

While “Blood and Gifts,” like “Oslo,” grapples at a personal level with world events at the tipping point, it goes to the pith of human issues with a directness unmatched in “Oslo.” It registers first to last as a testament of the human condition. Similarly, “A Walk in the Woods,” a two-hander, one Russian and one American, gets right down to the fiber of life; it is deeply philosophical, wry, wise, authentic.

The framework of “Oslo” – the title comes from the place where these dramatized negotiations take place – is the inspiration of two mid-level Norwegian diplomats, Terje Rød-Larsen and his wife Mona Juul, who initiate unofficial, secret talks between Israel and the PLO. Though their bold proposition meets initial skepticism as well as resistance from high-ranking Norwegians, the plan is finally green-lighted and feelers are put out to the two bitter foes.

What ensues is a play as process piece, fraught with wrangling between the two sides, relieved by some humor and glimpses of the negotiators in their human commonality outside the conference room when waffles are served and drinks are poured. 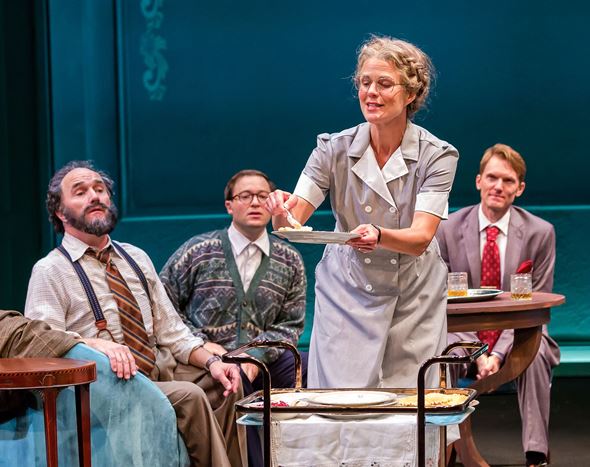 I had previously seen “Oslo” in the New York production, and in this second encounter found its blueprint – its political choreography – to militate against a real sense of unfolding drama. Beyond “Blood and Gifts” and “A Walk in the Woods,” a third better example of political negotiation as theater comes to mind: Ayad Akhtar’s “The Invisible Hand,” about an American banker kidnapped by Pakistanis for ransom. All three of these plays bear repeated viewing; all of them enmesh characters in an electric game of mutual discovery.

“Oslo” suffers from the super-noble syndrome of “The Exonerated,” Jessica Blank’s play about a group of innocent people wrongly imprisoned. Through all the grudging concessions and adamant refusals in “Oslo,” the unspoken incantation persists: “We can do this (noble) thing.” And they do. I don’t think a spoiler alert is needed for the historical outcome. The backroom accord became an official declaration of détente. At street level, however, the Israelis and the Palestinians still hated each other, and extremists made sure the hard-won peace was soon blown to smithereens. 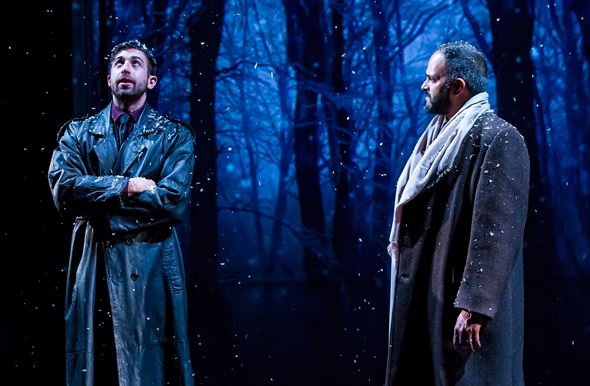 A quiet walk in a snowy woods breaks the ice between the Israeli negotiator (Jed Feder, left) and the Palestinian (Anish Jethmalani).

It’s the playwright’s sharply drawn characters, and their vivid incarnations here, that provide the real engagement and satisfaction in “Oslo.”

Amid a sizable cast, Anish Jethmalani sets the bar high as the lead Palestinian negotiator, fiercely single-minded when the two sides face each other across the table but also ready with a good joke when the day’s work is done and the combatants kick back to drink together. As his Israeli counterpart, Jed Feder cuts a tall and imposing figure with an edge to his personality that can slice at a moment’s provocation. Juliet Hart exudes homey charm as the gentle hostess whose late-night waffles have the whole assembly asking for more.

At the epicenter of the talks are the founders, Terje Rød-Larsen (Scott Parkinson) and his wife Mona Juul (Bri Sudia), who keep urging the enterprise forward while taking pains to remain neutral. Parkinson pushes exuberance and wheedling very close to caricature. Sudia offers an appealing, understated, very smart diplomat whose one amazing outburst all but stops the show in laughter.