‘Bernhardt/Hamlet’ at Goodman: Actress dons breeches to play a prince, sans all that poetry 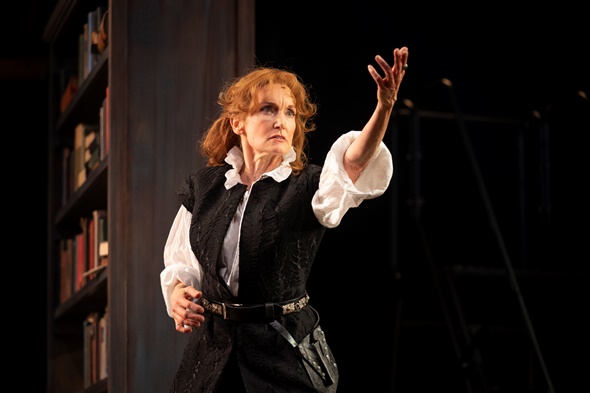 Iambic or not iambic, that is the question for French actress Sarah Bernhardt (Terri McMahon) as she takes on the role of Hamlet. (Liz Lauren photos)

“Bernhardt/Hamlet” by Theresa Rebeck, directed by Donna Feore, at Goodman Theatre through Oct. 20. ★★

In early 1899, at the heady height of her dizzying fame, the French actress Sarah Bernhardt reopened a Paris theater she had acquired and renamed after herself. Almost immediately, this ever controversial star was upsetting norms again by playing the title role in Shakespeare’s “Hamlet.”  That audacious gambit reimagined is the stuff of Theresa Rebeck’s plainly titled play “Bernhardt/Hamlet,” now on semi-satisfying view at Goodman Theatre.

Rebeck leaps right in at midstream – mid-soliloquy — of rehearsals for Bernhardt’s “Hamlet” production. You don’t have to know Shakespeare’s play, but it’s clear at once that the greater your familiarity with it the more you will glean from what’s going on. And perhaps the more troubled you may be by Terri McMahon’s rather superficial passes through one soliloquy after another. 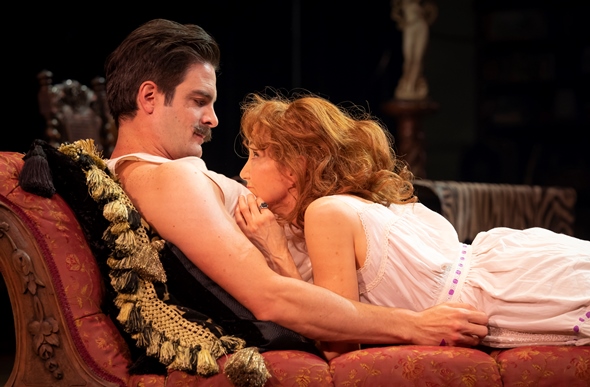 Now, one might argue – with McMahon’s Bernhardt – that what I hear as lightweight is precisely the “feminine” Hamlet that the historical Bernhardt (and thus the playwright, and so McMahon) intended. That layering does make a conundrum of criticism. Still, I’m not inclined to let McMahon, a seasoned veteran of the Oregon Shakespeare Festival, off the hook.

McMahon is more assured in unpeeling the persona of Sarah Bernhardt as a free spirit, a headstrong celebrity who knows her own worth and will have her way, who trusts that her devoted fans will go with her even to that undiscovered country whose bourn she is about to cross. But I didn’t buy this Hamlet as something ready for prime time. It rather seemed like a lark to be shared privately with friends.

I’ve seen some pretty terrific inhabitations of Shakespeare’s men by actresses who had those roles in their hearts and on their tongues: Glenda Jackson’s recent King Lear, for one, and some years back the marvelous Seana McKenna as Richard III at the Stratford Festival. Potent, sharply drawn characterizations, both of them. But again, an advocate for McMahon might point to the argument this Bernhardt makes repeatedly, that Hamlet isn’t that virile sort of man, that he is in fact a boy of maybe 19, home from college, a gentle soul still figuring out life, uncertain, overwhelmed and incapacitated,by the whirlwind of circumstance. 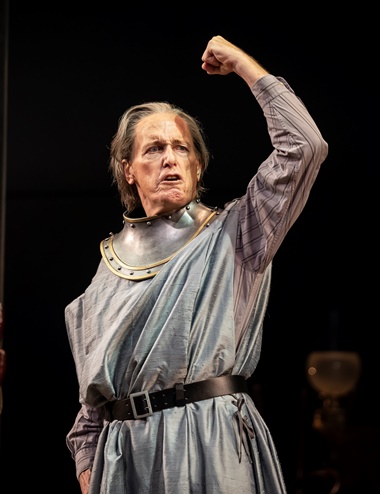 The veteran actor Coquelin (Larry Yando) will tell you he played Hamlet four times. You don’t even need to ask.

Here, Bernhardt and her historical older fellow actor Constant Coquelin (Larry Yando in a turn of world-weary assurance) never stop chewing on the question of Hamlet’s age. Bernhardt insists it is crucial that one comprehend the prince’s youth; Coquelin, ever reminding all in earshot that he played Hamlet four times, says no, he’s closer to 30. I would happily give Bernhardt her point and her Hamlet his feminine bearing were there more depth in her delivery, his words more measured in thought. And so we come to the true rub: the poetry.

Historically, Bernhardt decided not to use Shakespeare’s text in a standard French verse translation. She commissioned a prose version from the writers Eugène Morand and Marcel Schwob. In this play, she prevails upon the great French playwright, and her lover, Edmond Rostand to create a prose setting. Alas, the poor smitten fellow (John Tufts as the hapless milquetoast who also happens to be married) must set aside his masterwork in progress (that would be “Cyrano de Bergerac”) and thrust his nose into the incomparable Bard’s play day after day, a constant reminder of his own inadequacy.

Yes, Bernhardt went with a prose adaptation. But surely she based that choice on more nuanced reasoning than the playwright offers here. McMahon’s sublime actress sounds downright sophomoric in her rejection of Shakespeare’s iambic pentameter as just so much duh-DUH, duh-DUH, duh-DUH. And indeed, that is not how she speaks the original lines. She may not bring gripping subtlety to the soliloquies, but neither does she reduce them to idiotic incantation. So when she hammers at overstressed accents in making her case to the veteran Coquelin, who gently pushes back, her hyperbole simply doesn’t wash. It’s just sort of silly. 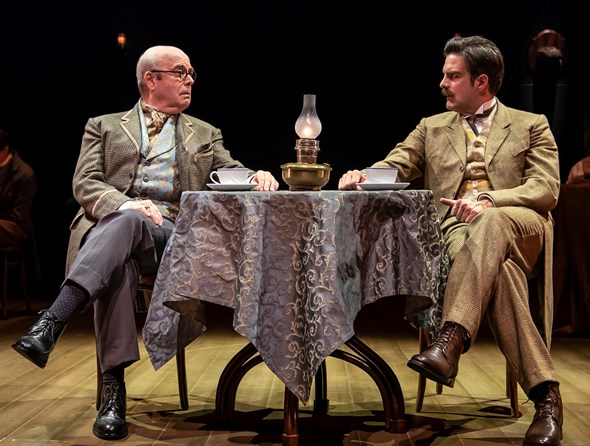 While Act 1 displays the cleverness of Rebeck’s writing and McMahon’s confidence as the grand dame, Act 2 gives the impression of a play turning repetitive, losing its way and ultimately landing nowhere. It makes a digression into the premiere of Rostand’s “Cyrano,” prefaced by some arch histrionics from Bernhardt, who might as well place the back of her hand to her anguished forehead as she commands Rostand to forget “Hamlet” and go finish his masterpiece.

We also find the actress’ historically profligate son Maurice (Luigi Sottile) dragged into the story by the scruff of his neck. He is not a compelling character, nor are their maternal musings by any means sufficient to sustain a narrative that began at the soul of Hamlet but has now dwindled to mom and son – doing what? – squaring off with rapiers. Bare bodkins, indeed.

Loved Dana Osborne’s period costumes and the sets by Narelle Sissons, especially the detailed backstage paraphernalia that lends the play an authentic aura of place. And a shout-out to William Dick for his elegant portrayal of the French drama critic Louis Lamercier. He’s not sold on this enterprise, either.