‘Into the Woods’ at Writers: Fairy-tale delights spun on life’s loom – fantasy and hard lessons 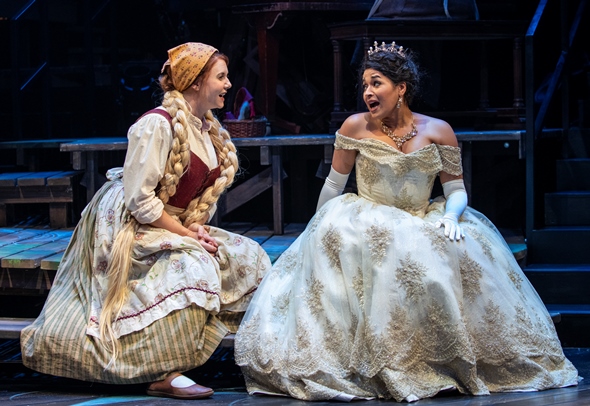 “Into the Woods.” Music and lyrics by Stephen Sondheim, book by James Lapine. At Writers Theatre, extended through Sept. 29. ★★★★★

The woods are as menacing as ever, but the production of “Into the Woods,” the Stephen Sondheim-James Lapine musical fairy tale currently running at Writers Theatre in Glencoe, is utterly luminous.

Sondheim and Lapine pulled off a miracle with their 1986 show, deftly exploring the deep philosophical and moral questions lurking below the surface of a seemingly frothy mashup of fairy tales featuring, among others, Little Red Riding Hood, Cinderella, Jack (of beanstalk fame) and a wily witch. 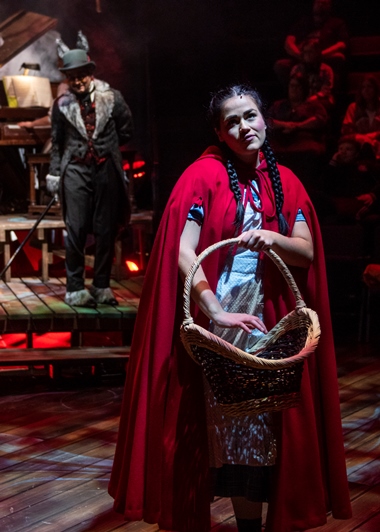 Directed by Gary Griffin, the Writers Theatre production finds an equally perfect balance between our delight in these old fables and our hard-earned knowledge that happily ever after is sheer fantasy. Driven by Sondheim’s propulsive melodies, the high-energy cast spills off Writers’ intimate thrust stage, marching confidently into the aisles, ready to slay a giant, rescue a princess, find Grandmother’s house. When they return, defeated, empty-handed, they settle alone onstage under the thick branches of a tall weeping willow tree (scenic design by Scott Davis). The bewildered loss they convey in Sondheim’s gentle ballads breaks our hearts.

The large cast is superb, from Bethany Thomas’s volcanic Witch to Kelli Harrington’s haughty Cinderella’s Stepmother. Their diction in Lapine’s punishingly fast-paced dialogue and intricate lyrics is impeccable. Propelled by an expressive trio of musicians led by pianist-conductor Charloltte Rivard-Hoster, their vocal lines are full of color and passion.

This is all the more impressive since the characters in “Into the Woods” are mostly stock fairy tale figures – the slightly dim-witted Jack and his hectoring mother, the leering Big Bad Wolf, the cheery, girlish Red Riding Hood and hopeful Cinderella. But each one comes across as a distinctive, fully rounded character. Unable to have children because of the Witch’s curse, the Baker and the Baker’s Wife (Michael Mahler and Brianna Borger) are as vividly real as any young couple. 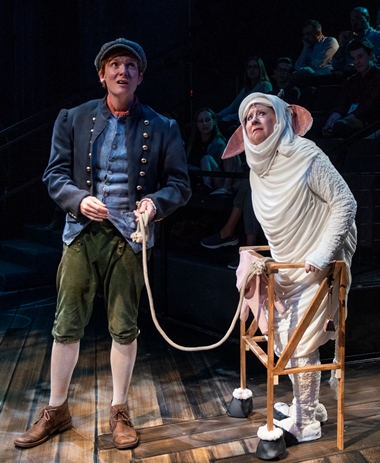 A loving spouse, she is nonetheless giddy at the thought of meeting a real, live prince. He wants to go off alone to find ingredients to lift the curse; she longs to be an equal partner. In the insistent back-and-forth of “Maybe They’re Magic,” she argues that any lies they tell along the way will be worth it in the end. “If you know what you want, then you go and you find it.” She could be any mate encouraging a partner to do what it takes to land that big job or get a child into college.

The Witch is the show’s towering role, and the tall, voluptuous Thomas fills every inch of it. As the stooped, vengeful shrew in Act I, she roams the stage like a fearsome, raggedy beast, rasping out threats and commands. In Act II, though she has traded in her magic power for youth and beauty, she still dominates the scene. A glittering Wonder Woman belt at her waist and tall black boots beneath a flowing, regal-purple gown, Thomas stalks the stage like a supermodel as she compels her colleagues to face cold, hard facts. “I’m not nice, I’m not good,” she announces. “But I’m right.”

Thomas creates a magical moment in Act I, turning her snarling growl into something entirely different in “Stay with Me.” Urging a restless Rapunzel to return to her tower, her voice becomes rich and full, nestling warmly into Sondheim’s soothing yet powerful melodic lines. 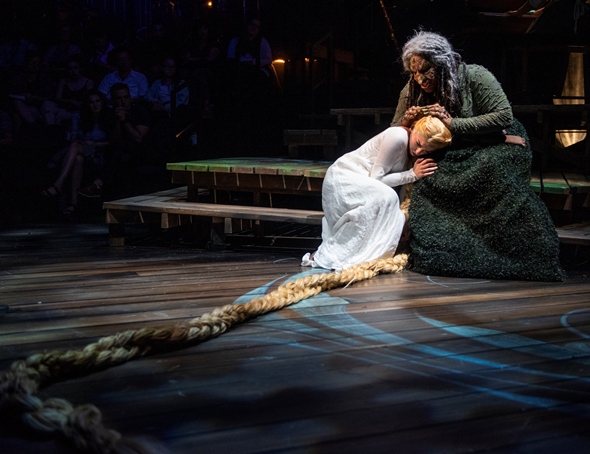 Rapunzel (Cecilia Iole), she of the legendary hair, seeks comfort with the Witch (Bethany Thomas).

Ximone Rose brings a lustrous, mellow voice to Cinderella, one of the show’s most intriguing characters. She longs to attend the royal festivities, but after a triumphant evening, she is ambivalent. The prince was “nice,” she says, but she had run away. It’s entirely fitting that she leads the musical’s most familiar song, “No One Is Alone” near the end of Act II.  Quiet and self-possessed, she lingers in the ballad, rueful, wiser yet radiating hope.

As Little Red, Lucy Godinez is a merry child, bratty one moment, dutiful the next, excited, scared but endlessly resilient. The tall, handsome royals – Alex Benoit as Rapunzel’s Prince and Ryan McBride as Cinderella’s Prince – are hilarious. Going one-on-one for the title of Most Put-Upon Lover, they bound on and offstage with fearless good cheer. Pompous but basically harmless, they bring to mind Buzz Lightyear, the none-too-bright, amiable astronaut of “Toy Story.” After all, Cinderella’s Prince admits, he “was raised to be charming, not sincere.”  Explaining the characters and untangling the complex story lines, Michael Halberstam’s Narrator is a genial, trusty guide.

“Into the Woods’’ tackles the weighty issues of facing fears and adversity. The woods may be a metaphor, but we have all been there, and, with luck, lived to tell the tale. It is sheer pleasure to find a little bit of ourselves in this compelling show.