Romp in the woods at American Players: A lusty, stylish go at ‘She Stoops To Conquer’ 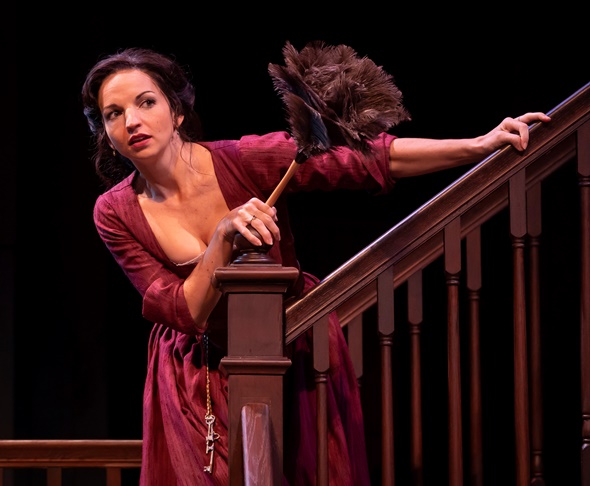 Review: “She Stoops to Conquer” by Oliver Goldsmith, at American Players Theatre through Sept. 20. ★★★★

SPRING GREEN, Wis. – Oliver Goldsmith’s broad comedy “She Stoops to Conquer” has been around for nearly 250 years, one of the few 18th-century British plays to hold the stage in this country despite the great displacement of time and place. Charming, LOL funny and warm-hearted, “She Stoops to Conquer” is a smashing success at American Players Theatre, an ensemble coup but also a particular triumph for Laura Rook as an aristocratic girl who sheds her fine mantle to win the heart of a hopelessly shy peer. 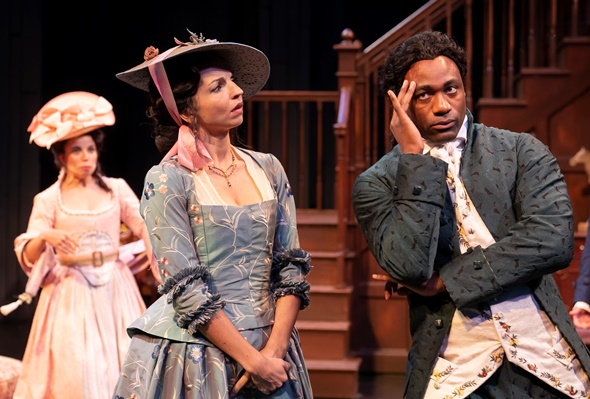 The diffident fellow in question, Marlow, an excellent figure of a young man, isn’t generally mortified in the company of women. It’s just that he loses his tongue when he’s around smart, competent young ladies of his own class. Faced with a bright lass of high station – his exact match – Marlow turns catatonic. But hook him up with a servant girl, and suddenly he gets his spine and wits back. He shines. He becomes downright rakish.

Marlow’s condition is no doubt an excellent subject for a psychoanalytic treatise. But it also makes for riotous misadventure when he shows up with his friend Hastings at the posh home of Mr. and Mrs. Hardcastle. I should qualify that: Marlow and Hastings mistake the Hardcastle residence for an inn, and assume that Mr. Hardcastle, generously welcoming, is the innkeeper, to be ordered about – even to service for boot removal.

The Hardcastles have a daughter, a lovely girl called Kate, who, looking every bit the elegant lady that she is, comes upon Marlow in the parlor. He is stupefied. He can’t even look her in the face. Seriously. They have an awkward conversation during which he never actually sees her. A short time later, Kate reappears dressed down for hanging about the house. Marlow, who still doesn’t know who she is, now glimpses her for the first time, and with great interest. His observation is confirmed to Kate by a real housemaid. Aha! Kate grabs a feather duster, and the game is on. 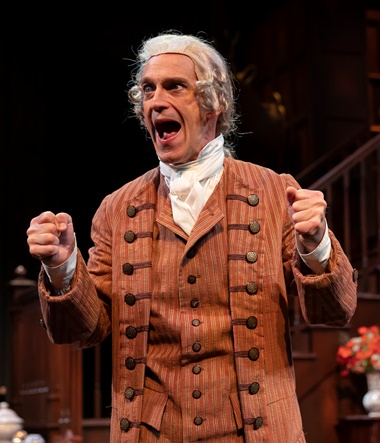 James Ridge plays a householder of goodly means who is mistaken for an innkeeper and thus servant-on-call.

Rook proves herself an enchanting comedienne as the love-struck Kate, whose sly ruse elicits a response from her handsome prey that sends her reeling. There’s palpable truth in Rook’s bedazzled swoons, which she plays to the edge without tumbling wholly into farce. But there’s also a soft, credible yearning in this Kate, who lights up the stage with her resilient wit and determination.

She is well matched in comedic aplomb by Jamal James’ strapping Marlow, a fellow solidly grounded except when a certain order of female makes the very earth move beneath his feet. As the tortured Marlow, suddenly come face to averted face with beautiful Kate, James’ agonized whimpering sent torrents of laughter through the audience. So stifling was the poor lad’s misery that sometimes his moving lips would emit no sound at all.

Director Laura Gordon has woven a rich comic tapestry, with James Ridge as the expansively accommodating Hardcastle, flummoxed by his treatment as a servant but valiant in his efforts not to respond with rudeness. As Mrs. Hardcastle, who has long envisioned a union of Kate with her oafish son by a previous marriage, Sarah Day is the picture of a single-minded matron who never quite grasps the crazy events spinning around her. 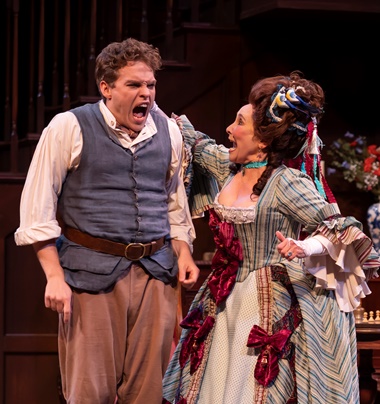 Mrs. Hardcastle (Sarah Day) wants her son (Josh Krause) to marry Kate. He’s not so keen about the idea.

Mrs. Hardcastle’s pride and joy, her lump of a son named – what else? – Tony Lumpkin, takes the delightfully earthy, grog-swilling form of Josh Krause, a hearty carouser with an excellent voice for a lusty song. Tony’s immediate goal in life is to avoid marrying Kate. As straight foils to this gang of rompers, Ty Fanning and Phoebe González make a handsome pair of young lovers bent on marriage but caught up in the tumble of circumstances.

The production’s fine style arguably begins with scenic designer Regina Garcia’s grand interior of the Hardcastle residence and the striking period costumes by Rachel Laritz. All told, “She Stoops to Conquer” affords about as much fun as one might hope to have beneath a starry sky at a play in the woods.