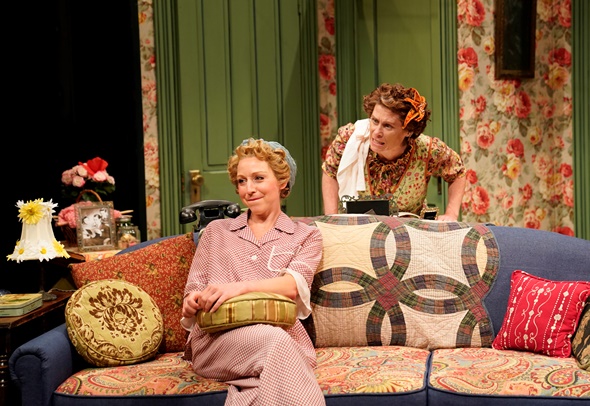 Dottie (Cristina Panfilio, seated) is aglow about her new gentleman suitor, but older and wiser Bodey (Colleen Madden) has a different idea. (Photos by Liz Lauren)

Review: “A Lovely Sunday for Creve Coeur” by Tennessee Williams, at American Players Theatre through Sept. 26. ★★★★★

SPRING GREEN, Wis. — Dottie awaits a gentleman caller. Or rather, she’s waiting for a gentleman to call on the phone. She’s certain that he will. This man, the principal at the high school where Dottie teaches civics, made his intentions toward her quite clear before showing her how the passenger seat in his sporty car would recline all the way. All the way might still be ringing, like a phone, in Dottie’s ear.

This is the fraught setup for “A Lovely Sunday for Creve Coeur,” an obscure play by Tennessee Williams from late in his life: a touching, trenchant, typically insightful and empathic look at aging womanhood – four women in this instance – offered in a production at American Players Theatre that reveals a hidden gem by the incomparable singer of America’s Southern song. 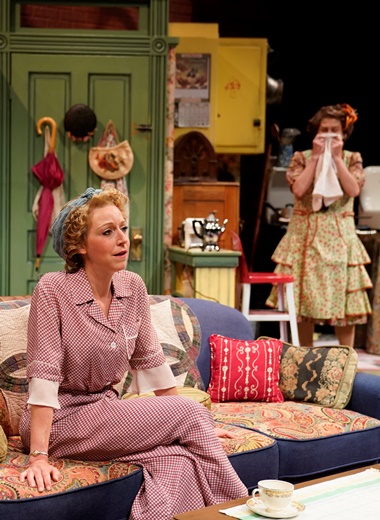 While Dottie (Cristina Panfilio) waits for the phone to ring, Bodey (Colleen Madden) nudges and frets.

Creve Coeur is a large and popular park in St. Louis, and on this particular Sunday, Bodey, the middle-aged woman with whom Dottie rooms, is frying chicken for an outing there. Bodey has invited her twin brother Buddy, by all accounts a husky and rather simple fellow much given to beer and cigars. The real deal is that Bodey wants to play matchmaker for her brother and Dottie, but Dottie wants none of it. She has a gentleman – a real gentleman – much more to her taste on the string, and he could be calling at any moment.

Cristina Panfilio is radiant as the thirtyish Dottie, palpitating in her eagerness. She complains that while she was having a quick shower, Bodey was surely neglecting the telephone – and suspicious that the older woman, with an agenda of her own, may not be telling the truth about a call that might have come.

Bodey, of German stock and given to inverted turns of phrase in the mode of throw momma from the train a kiss, is as plain-spoken as she is good-hearted, and Colleen Madden brings her to blooming, earthy, irrepressible life. Through much of the first stretch of this substantial play, it’s just Dottie and Bodey, the latter pressing the former with the good sense of giving brother Buddy a fair shot. Bodey even ventures into negotiation: She will get Buddy to give up beer and at least cut way back on the cigars. How would that be? 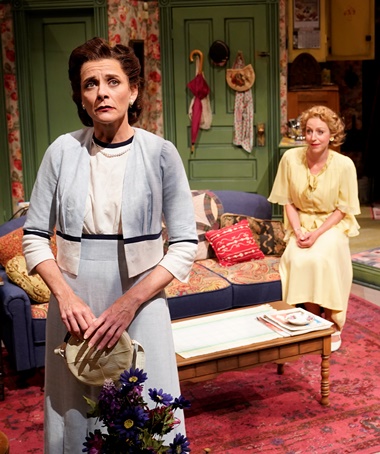 Dottie just sighs. No way. Forget it. Compared with the gentleman who’s soon to call, well – there is no comparison between him and Bodey’s brutish nominee.

Then quite unexpectedly, Dottie’s friend and fellow teacher at the high school, Helena, shows up at the door. It is significant that stylish, rather arch and also middle-aged Helena teaches art history. Helena – the marvelously droll, then sarcastic and at last openly vituperative Tracy Michelle Arnold – draws our attention to the singular décor of Bodey’s home: a tumultuous hodgepodge of egregiously flowered wallpaper and mismatched furnishings complemented by miscellaneous knickknacks. But Bodey brushes aside Helena’s ever sharper observations. She likes her home just the way it is. It’s cheerful.

Helena has come around for a reason. She and Dottie are throwing in together to take a fairly expensive flat at a very good address. After all, Dottie expects to be entertaining her gentleman and, well, Bodey’s crazy-quilt abode really won’t do. But a need for quick action on the new place has suddenly arisen, and Helena has come for some cash from Dottie. That’s a problem, however, because Dottie has depleted her bank account in freshening her wardrobe, the better to please her gentleman. Perhaps a post-dated check would work. 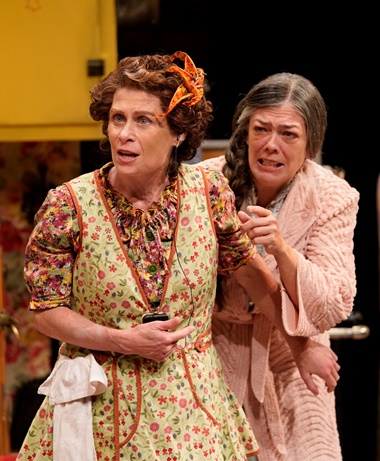 Angst rises to fever pitch, only to be exacerbated by the arrival Bodey’s upstairs neighbor, Miss Gluck, of advanced years and German birthright, who has just lost her mother. Very lonely, Miss Gluck (Carolyn Ann Hoerdemann as a picture of inconsolable misery) babbles in German through her tears, understandable only to Bodey. We are now poised on the slippery slope of a denouement.

“A Lovely Sunday for Creve Coeur” might be taken for a gentler sibling of “The Glass Menagerie.” It is poignant, luminous, but not quite tragic. Suffice to say that visions, hopes, dreams pop like so many balloons on all sides. The hauteur of the art historian is shaken, her vulnerability touched. Dottie absorbs a lesson not to be found in a civics book. Resolute Bodey ends right where she started, reveling amid the boisterous tumult of her floral wallpaper – her chicken now fried and boxed for the picnic.

I believe Miss Gluck was still crying as I left the theater.