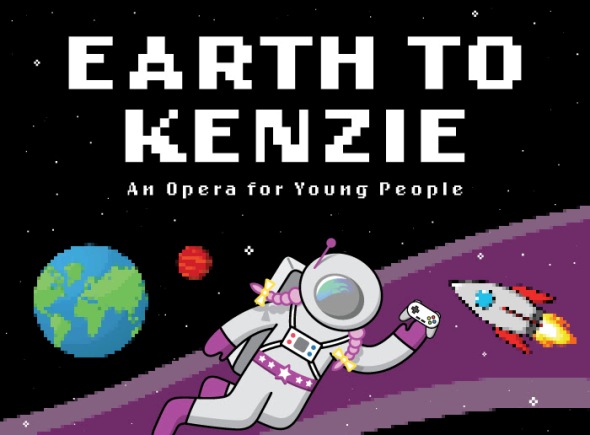 “Earth to Kenzie” tells the story of Kenzie, a fifth grader with homework, asthma, and a big imagination. When she and her mother must move into a family shelter, Kenzie struggles at school and escapes into the world of video games alongside her avatar, Edwin. Through their imaginary space adventures, Kenzie dares to go farther than ever. Can she find the confidence to make friends and succeed at school? Can she find her way home?

The cast of four singers – playing Kenzie, her mother, her avatar Edwin, and her teacher — will be accompanied by piano. The fully staged and costumed 45-minute production will be performed in English. (The cast will be announced at a later date.)

Librettist Jessica Murphy Moo was introduced to Lyric audiences last season as the librettist of the chamber opera An American Dream (by Jack Perla) which was commissioned by Seattle Opera and premiered there in 2015. Murphy Moo is the editor of Portland magazine, the award-winning publication of the University of Portland in Oregon.

Chicago director Jess McLeod returns to Lyric after directing Chicago Voices: Stories and Songs of Chicago in 2016/17 and Lyric Unlimited’s EmpowerYouth! production, Empower, during the 2017/18 season. McLeod is currently resident director of Broadway in Chicago’s Hamilton and has directed at Chicago Shakespeare Theater, Victory Gardens, Steppenwolf, and A Red Orchid Theatre.

Set designer Jeffrey D. Kmiec makes his Lyric debut with Earth to Kenzie. A three-time Equity Jeff Award winner for shows at the Paramount and Drury Lane theaters, he has also designed sets for productions at Chicago Shakespeare, Marriott, Timeline, Northlight, Porchlight, and other theaters in Chicago and regionally.

Costume designer Mieka van der Pleog has worked with Lyric for both EmpowerYouth! projects (2018 and 2019), and has created costumes for productions at Lookingglass, Chicago Shakespeare, Remy Bumppo, The Second City, Writers, and The Hypocrites theater companies. She is an artistic associate at About Face Theatre and has been nominated for four Joseph Jefferson awards.

The production is a co-commission with Seattle Opera. Lyric Unlimited’s educational partner for Earth to Kenzie is Codeverse, the world’s first fully interactive coding studio and development platform for kids ages 6-13.
Leading up to the public performances at the Vittum Theater, Earth to Kenzie will be staged for school groups in venues throughout the Chicago area as part of Opera in the Neighborhoods (OIN). When it was launched 23 years ago, OIN presented short versions of traditional operas performed in English. In recent years, new works have been commissioned and presented for school-age audiences, including Rhoda and the Fossil Hunt (2018), The Scorpion’s Sting (2017), Jason and the Argonauts (2016), and Second Nature (2015). Lyric Unlimited presents 30 Opera in the Neighborhoods performances at 15 sites each season, engaging thousands of Chicago area students through live operatic performances in their communities.

Teachers can make online reservations to secure an Opera in the Neighborhoods performance of this title for their schools, starting on August 1. Visit lyricopera.org/OIN for more details.