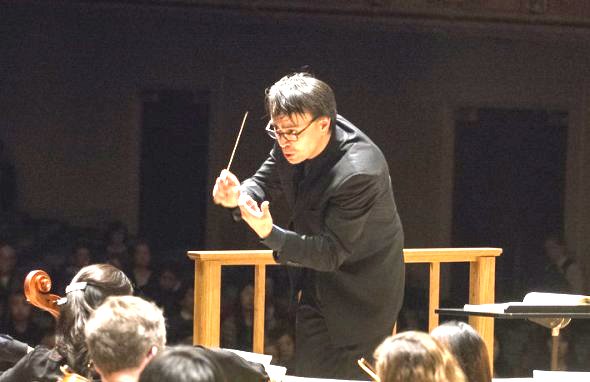 Watch for Ken-David Masur in 2019-20 as principal conductor of the Civic Orchestra next season, when he also assumes role of music director of the Milwaukee Symphony. (Samuel J. Brewer)

Masur will have three weeklong residencies in Chicago during the 2019-20 season and also lead the rescheduled Civic Centennial Celebration Benefit Concert featuring Yo-Yo Ma as soloist in Dvořák’s Cello Concerto on Sunday, March 1, 2020, at 7 p.m. He will conduct four concerts in Orchestra Hall at Symphony Center, as well as a concert at the South Shore Cultural Center and a Chicago Public School.

In addition to conducting select Civic Orchestra concerts, Masur will guide artistic planning, work collaboratively with Chicago Symphony Orchestra musicians who serve as coaches to Civic Orchestra members, and lead special projects that engage diverse communities at Symphony Center and throughout the city.

Masur has led the Civic Orchestra of Chicago in concerts annually for the past three seasons. Now at the end of his associate conductorship with the Boston Symphony, he recently stepped into two programs earlier this spring to replace Gustavo Dudamel on a day’s notice to lead the BSO, in addition to his own Boston Symphony subscription week last fall. Last summer he made his Chicago Symphony Orchestra debut at Ravinia, and this summer Masur will lead several events at Tanglewood, including a new work by Augusta Read Thomas as part of the highly anticipated opening of the Tanglewood Learning Institute. He previously has led the Los Angeles Philharmonic, Detroit Symphony, Munich Symphony, l’Orchestre National de France in Paris and National Philharmonic of Russia, among many others.

Masur and his wife, pianist Melinda Lee Masur, are founders and artistic directors of the Chelsea Music Festival, an annual summer festival of music, art and cuisine, which earlier this month presented its 10th season in New York celebrating the 200th birthday of Clara Schumann. Masur received a Grammy nomination from the Latin Recording Academy in the category Best Classical Album of the Year for his work as a producer of the album “Salon Buenos Aires.” Additionally, he recently made recordings with the English Chamber Orchestra and violinist Fanny Clamagirand, as well as with the Stavanger Symphony. Beginning with the 2019-20 season, Masur assumes his role as music director of the Milwaukee Symphony Orchestra.

Founded in the 1919/20 season by the Chicago Symphony Orchestra’s second music director, Frederick Stock, the Civic Orchestra of Chicago is a signature program of the Negaunee Music Institute at the CSO. This prestigious training ensemble for emerging professional musicians celebrated its 100th season in 2018-19 and is the only one of its kind affiliated with a major American orchestra.

Since 1919, young artists have sought membership in the Civic Orchestra of Chicago to develop their talents and to further prepare for careers as professional musicians. Founded by Frederick Stock, second music director of the Chicago Symphony Orchestra, the Civic Orchestra is the only training orchestra of its kind affiliated with a major American orchestra.

The Civic Orchestra offers emerging professional musicians unique access to the Chicago Symphony Orchestra (CSO) through immersive training with the musicians of the CSO and some of today’s most sought-after conductors, including world-renowned CSO Zell Music Director Riccardo Muti. With additional guidance from CSO Judson and Joyce Green Creative Consultant Yo-Yo Ma, Civic Orchestra musicians develop as exceptional orchestral players and engaged artists, cultivating their ability to succeed in the rapidly evolving world of music in the twenty-first century.

The importance of the Civic Orchestra’s role in Greater Chicago is underscored by its commitment to present concerts of the highest quality free to the public. In addition to the critically acclaimed live concerts at Symphony Center, excerpts from Civic Orchestra performances at Symphony Center can be heard locally on WFMT’s (98.7 FM) “Music in Chicago.”
Civic musicians also expand their creative, professional, and artistic skill and reach diverse audiences through performances at Chicago Public Schools, “artistic challenges” led by Yo-Yo Ma, and a series of chamber concerts at various locations throughout the city including Chicago Park District field houses, the National Museum of Mexican Art, and Zhou B Art Center.

To further expand its musician training, the Civic Orchestra launched the Civic Fellowship program in the 2013/14 season. Now engaging fifteen members of the Civic Orchestra, Fellows participate in a rigorous curriculum above and beyond their orchestral activities that is designed to build and to diversify their creative and professional skills.

The Civic Orchestra is a signature program of the Negaunee Music Institute at the Chicago Symphony Orchestra. The Institute offers a wide range of education and community programs that engage more than 200,000 people of diverse ages, incomes, and backgrounds each year, in Chicago and around the world. For more information on the Institute and its programs, please visit cso.org/institute.