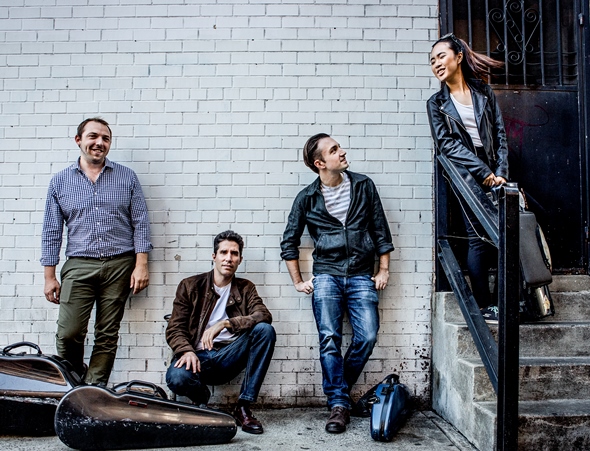 The North Shore Chamber Music Festival is the Chicago-area classical scene’s best-kept secret. Anything but a run-of-the-mill suburban musical offering, it offers the kind of top-level talent typically heard downtown or in other major music centers. How is this possible in Northbrook? Thank local residents Vadim Gluzman, an internationally known violin soloist, and his wife, pianist Angela Yoffe, who founded the festival in 2011.

Drawing on their extensive connections in the music world, they are able to attract a rich mix of national and even international artists to the three-concert event each June. That is again the case this year, as the opening concert June 12 in Northbrook’s Village Presbyterian Church made clear. 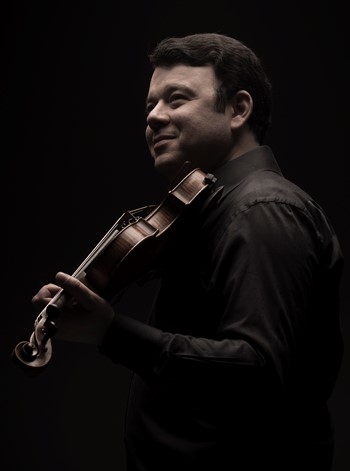 While the festival has certainly included new and more off-beat works on its concerts, it stuck to mainstream repertoire for this first program, beginning with Beethoven’s String Quartet in F minor, Op. 95 (“Serioso”) played by the Escher String Quartet.

Resident ensemble at Southern Methodist University in Dallas, the Escher Quartet last appeared at the North Shore Festival in 2017 and also performed in February at the Harris Theater for Music and Dance as part of the Chamber Music Society of Lincoln Center. The group has received particular attention for its two-volume recording of Alexander Zemlinsky’s complete string quartets.

Beethoven’s brooding middle-period quartet from 1810 lives up to its somber sobriquet, the only one he supplied to any of his works in this form. Written at a difficult time in the composer’s life when he was confronting increasing deafness and other health struggles, it is suffused with introspection and angst.

It took the Escher a little time to settle in, but once it did, it dug into this unsettled, sometimes conflicted music, bringing a muscularity and edginess to its playing. The high point was the Allegro ma no troppo second movement, which opens with a quiet, simple, slowly pulsing cello solo, which is repeated later. Cellist Brook Speltz cello realized this passage with a suitably unforced, understated approach that fit the spare beauty of this section.

Although first violinist Adam Barnett-Hart is clearly the sparkplug of this group, he does not come across as the kind of dominating figure that, say, Robert Mann was in the original Juilliard String Quartet. Second violinist Danbi Um, a strong, assertive player in her own right, clearly held her own alongside him. Indeed, all four players in the Escher are wonderfully well matched in both talent and temperament, and they generated impressively similar amber tonal colors that fit this work’s dark mood.

It is always difficult to get the full measure of a quartet in just one piece, so, fortunately, festival-goers will have the chance to hear the group again in the final two concerts in a mix of works by such composers as Mozart, Reicha and Wolf.

As solid as that performance was, the unquestioned highlight of the concert was the evening’s second and concluding offering: Schubert’s glorious Octet in F, written 14 years after Beethoven’s quartet. Even though it is a pillar of the chamber music repertoire, it is still not heard that often because of the number and mix of musicians that it requires.

Indeed, this is almost a small orchestral work, with strings, woodwinds and brass all represented. Because music festivals have more flexibility in terms of programming and personnel, the Octet is an ideal piece for such a setting. And the North Shore festival has, not surprisingly, offset it on the June 15 program with Mendelssohn’s equally famous String Octet in E-flat. 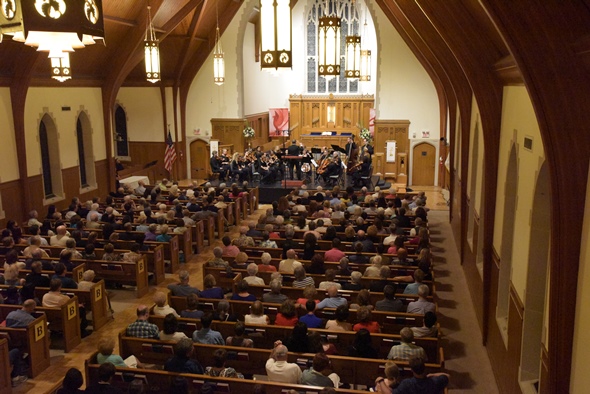 Festivals bring together musicians who don’t typically perform together, and the newness of the resulting collaborations can bring a freshness and electricity to the playing. That was certainly the case here. These eight musicians from across the United States seemed happy to be together and eager to perform this nearly hour-long work, and those feelings could be sensed in the exuberance and immediacy they brought to their performances. This piece is essentially the antithesis of Beethoven’s “Serioso,” with these eight musicians luxuriating in its sunny, upbeat spirit.

Schubert’s octet was commissioned by Count Ferdinand von Troyer as a counterpart to Beethoven’s Septet, Op. 20, which had already gained considerable popularity. It uses all the same instruments – violin, viola, cello, double bass, French horn, bassoon and clarinet – and adds a second violin for more sonority. Because the Count was a first-rate amateur clarinetist, that instrument gets a prominent role in the Octet.

A clarinet solo opens the second movement and the first violin soon answers, with two passing the main melody back and forth, often in a kind of call-and-respond fashion. Similar exchanges happen in the later piece as well, so it is not surprising that the stage was set up in such a way that the first violinist and clarinetist sat opposite it each other at the front of the stage – the tips of a U-shaped configuration.

Ilya Shterenberg, principal clarinetist of the San Antonio (Tex.) Symphony and Pro Musica Chamber Orchestra in Columbus, Ohio, brought eloquence and nuance to his playing and had fun with the instrument’s perky, smile-inducing solos in the third movement. He also displayed impressive endurance; playing for nearly an hour with hardly a break is no small challenge for a clarinetist’s embouchure. Gluzman served as first violinist and seemed totally at home in the role, offering a few subtle cues to fellow players with looks their way and playing with his usual singing line, plush tone and relaxed ease.

Eric Reed, the newest member of the American Brass Quintet, made the most of his instrument’s occasional solos with his warm, golden tone, and Catherine Chen, principal bassoonist of the Milwaukee Symphony Orchestra, offered agile, flexible playing. Anything but simple, the bass line gave double bassist Kurt Muroki, a member of the Chamber Music Society of Lincoln Center, plenty to do, and he handled it all with aplomb.

Completing the ensemble were second violinist Lisa Shihoten, cellist Mark Kosower and violist Atar Arad. Even though these performers don’t normally play together, they meshed well and, though a bit more volume from the cello would have been helpful, the balances were generally spot on. In the end, all that was left to do was sigh with contentment.

After intermission and before the Octet, the Music Makers, an umbrella organization overseen by Gluzman and Yoffe that incorporates the festival, presented its first-ever Commmunity Ambassador Awards to: Aviv Esra, Consul General of Israel to the Midwest; Henry Fogel, former president and chief executive officer of the Chicago Symphony Orchestra and a longtime festival supporter, and Betty Haag-Kuhnke, founder and director of the Betty Haag Academy, a private music school in Buffalo Grove.

The festival continues at 7:30 p.m. June 14 with a program that includes the world premiere of Arad’s “From Here to There” for String Trio, and 7:30 p.m. June 15 with a concert featuring Mendelssohn’s Octet and a series of dances and other short works. For complete information, visit nscmf.org.