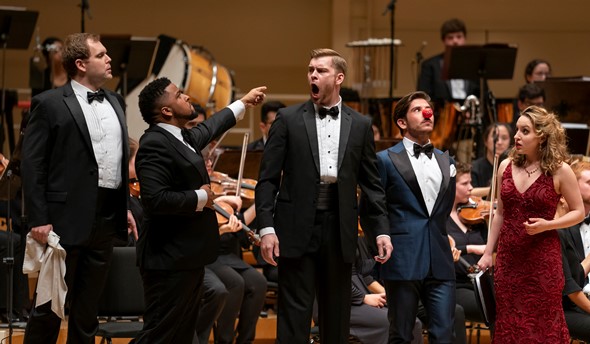 Review: Singers from the Lyric Opera’s Ryan Center with the Civic Orchestra of Chicago conducted by Michael Christie.

The 12 members of the 2019-20 Ryan Opera Center Ensemble (11 singers plus keyboardist Madeline Slettedahl) no doubt hope to join those ranks soon. Chicago audiences got a chance to see 11 of them in action (mezzo-soprano Kayleigh Decker was ill) and weigh their potential June 5 at Orchestra Hall as they teamed for a concert with the Civic Orchestra of Chicago and guest conductor Michael Christie. 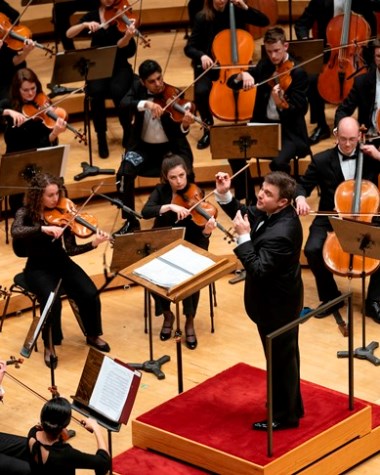 The singers and the Civic Orchestra, an equivalent training program affiliated with the Chicago Symphony Orchestra, presented a concert of arias and scenes from a nicely varied mix of four operas from the 18th-20th centuries.

Spirits were high for the event, in which the singers were clearly having fun even as they were trying impress. And the audience, which no doubt included a sizable contingent of families and friends, could hardly have been more receptive, offering enthusiastic applause and sometimes cheers after each selection.

Competition is tough for entrance into the Ryan Opera Center, so the consistent promise of these aspiring artists was hardly surprising. Vocal technique was almost universally high, even where other qualities showed room for growth: emotional commitment to the meaning of the words or comfortable stage presence.

A few of the current Ryan Center singers already seem ready for prime time. In that category is soprano Emily Pogorelc, a 2018 graduate of Philadelphia’s Curtis Institute of Music who is in her second year in the Lyric program.

The Milwaukee native was the runaway star of the evening in the title role Donizetti’s “The Daughter of the Regiment.” She hilariously flubbed her way through singing lessons in an Act 2 scene and then lit up the stage with an extended aria that ends with the patriotic anthem, “Salut à la France.” (A highlight was the plaintive accompaniment by the Civic Orchesta’s principal cello, Kelly Quesada, in the slow beginning.) 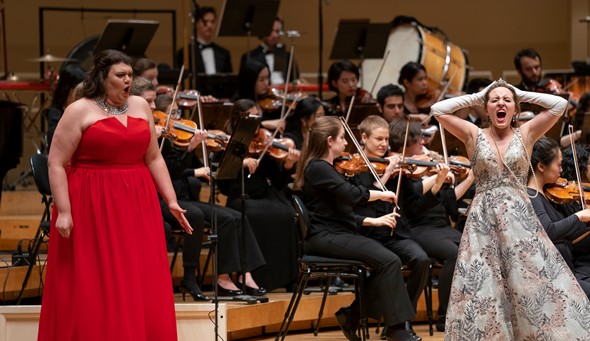 Contralto Lauren Decker, left, and soprano Emily Pogorelc sang a duet from Donizetti’s “The Daughter of the Regiment.”

It’s imperative in a big show-stopping aria like this one to seize the music and make it your own, and that’s exactly what Pogorelc did, bounding with energy and brio. She has a big, soaring voice with wonderfully agile coloratura and zinging high notes, and she made sure everything was in the service of the character’s emotions.

Baritone Christopher Kenney, a second-year member of the Ryan Opera Center, stole the show in the first half as he suitably hammed it up in “Largo al factotum,” Figaro’s famed aria from Rossini’s “The Barber of Seville,” and enlivened a subsequent scene from Act 2. A bit more vocal oomph would have been welcome (a few words were hard to hear), but Kenney possesses an appealingly flexible voice and plenty of showmanship and stage power to go along with it. 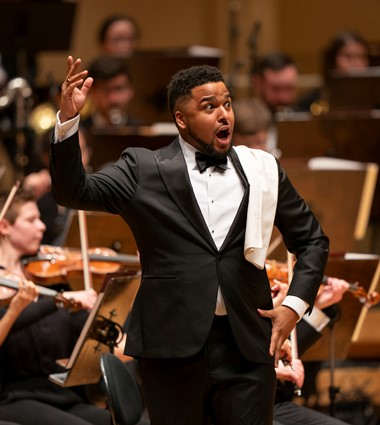 First-year Ryan Center bass Anthony Reed stood out even though he had no big moments in the spotlight. With an easy stage presence and a natural feel for vocal repartee, Reed made the most of the three small roles, wittily partnering with Pogorelc in “The Daughter of the Regiment.” His deep, resonant voice was an ideal fit for the role of Basilio in “The Barber of Seville,” where he brought compelling barrel tones to the last three words of the line, “I am yellow as a corpse?”

Tenor Eric Ferring, a second-year Ryan Center member from Dubuque, Iowa, got his turn to shine as Don Ottavio in Mozart’s aria “Il mio tesoro” from “Don Giovanni.” His bright tenor is ideally suited to Mozart, and he showed a comfortable feel for the Italian. That good impression was mitigated by some physical unease. He kept his arms oddly at his side during the aria until he finally gestured stiffly at the end.

Among other notable moments, contralto Lauren Decker offered an aptly witty take on the role of the Marquise in “The Daughter of the Regiment,” and it would have been nice to hear more from her. Mezzo-soprano Kathleen Felty proved to be a technically secure singer, but it was hard not to wish for a deeper engagement with the role of Tina in Argento’s “The Aspern Papers.” Also featured were soprano Mathilda Edge, tenor Mario Rojas, baritone Ricardo José Rivera and bass-baritone David Weigel. 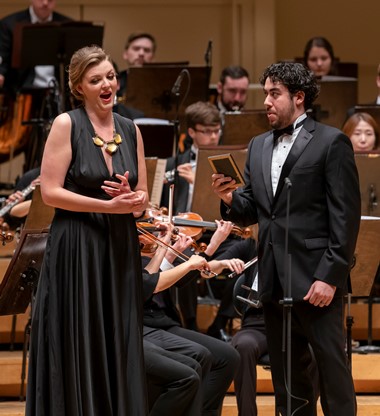 Michael Christie, who made his Lyric Opera conducting debut earlier this season in Verdi’s “La Traviata,” has built an admirable reputation in the opera world. That background plus his experience of previously leading three similar programs with Ryan Opera Center singers, including one in 2014 with the Civic Orchestra, made him ideally suited for this program.

If his frequent smiles were any gauge, Christie relished collaborating with his young colleagues. He drew inspired playing from the musicians in three overtures, especially Berlioz’s “The Corsair,” which came off as every bit the action-packed mini-drama it should be, with a strong showing by the brass. Christie also provided solid support for the singers.

Perhaps best of all, conductor and orchestra proved to be worthy partners with these singers in making the extended scenes come across as concise moments of genuinely involving musical theater.