‘Miracle,’ a musical memory of the 2016 Cubs, drives nostalgia to deep center – back, back… 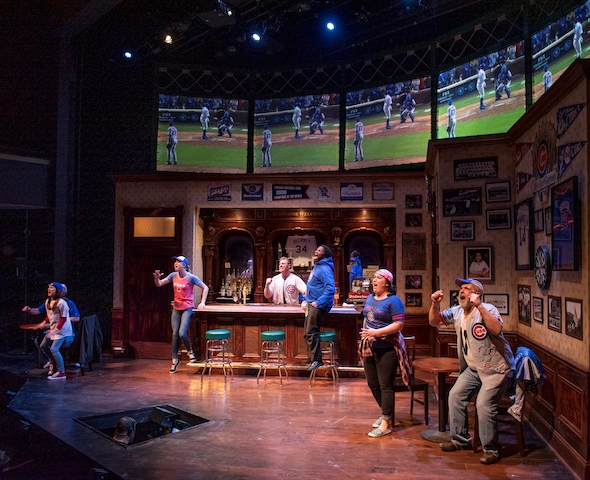 Review: “Miracle,” music and lyrics by Michael Mahler, book by Jason Brett. At the Royal George Theatre through July 14. ★★★

Curtis Mayfield, Chicago native and Rock and Roll Hall of Famer, put it eloquently in his 1963 hit single: “It’s all right, have a good time,” he sings in his soulful voice. “It’s all right.”

“Miracle,” a new musical about the 2016 Chicago Cubs at the Royal George Theatre­­, offers that same reassuring message. With music and lyrics by Michael Mahler and book by Jason Brett, its invitation is open to anybody. But it goes out especially to that subset of devout Cubs fans who remember exactly where they were at 11:47 p.m. (Chicago time) Nov. 2, 2016, when the North Siders won their first World Series in 108 years. It’s all right, Miracle implies, to take a luxurious dip into unbridled nostalgia now and then.

The musical certainly pushes the right buttons for sentimental journeying with the 2016 Cubs. The setting, designed by Collette Pollard, is Maggie’s Bar, a long-established, faintly shabby, hole-in-the-wall Wrigleyville joint. The extravagantly carved wooden back bar presides over the space like an altar screen. The vinyl-topped metal stools and wooden tabletops, worn to a soft sheen by decades of spilled beer, have seen better days. Evocative images of the World Series games, individual players and Wrigleyville rooftops unfurl continuously on a strip of screens stretching across the stage above the bar.

Charlie, Maggie’s middle-aged son, is a once-hot young baseball prospect who never made it to the bigs. Now he’s struggling to keep Maggie’s afloat after his mother’s death and mismanagement by his ailing father. Wrigleyville is gentrifying, and vultures – in the person of a neighboring bar owner deliciously denoted in the program as Sleaze – are circling. Even the most loss-hardened Cubs fans will feel Charlie’s pain; non-fans will scoff at the predictable plot. 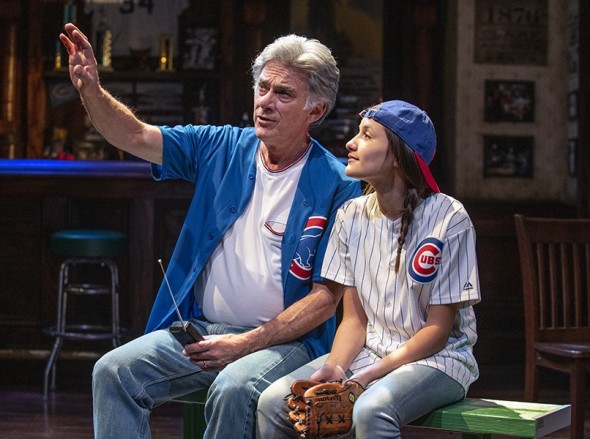 But here’s the little miracle inside Miracle: Despite the none-too-original storyline, the production is tightly paced, bristling with catchy songs and crisply defined characters. The idea for the show came from William A. Marovitz, a former Illinois state legislator and longtime baseball fan whose district included Wrigleyville, and Julian Frazin. Marovitz is an experienced theater producer, and the show’s cast and creative team, including director Damon Kiely and projection designer Mike Tutaj, are first-rate.

As Charlie, Brandon Dahlquist expertly conveys the conflicts of a dutiful, loving son, husband and father trapped on that noxious Cubs fans treadmill. Decades of repeatedly losing and hoping that next year will be the year have taken their toll. Though he retains an athlete’s body, his tired eyes and weary shoulders convey the burden of living a life on hold.

Elise Wolf, alternating with Amaris Sanchez as Dani, Charlie’s Cubs-obsessed daughter, is a preteen firecracker. In real life a pitcher for a youth ball team, she punches her glove like a pro. Long legs and arms flying, she prances around her dad’s bar with the unshakable optimism and energy of a future locker room leader. Gene Weygandt is touching as Pops, Charlie’s rough-edged but soft-hearted dad.

Doting on Dani as the family’s newest generation of Cubs fan, he mourns both his beloved Maggie and his unrealistic fantasy of Charlie as a big league star. Jonathan Butler-Duplessis brings a warm heart, big presence and straight talk to the role of Larry, Charlie’s friend and part-time barkeep/lawyer. As Charlie’s wife, Sofia, Allison Sill is an optimistic yet empathetic foil for Charlie’s angst. Portraying loyal denizens of Maggie’s, Veronica Garza and Michael Kingston are the essence of long-suffering fandom, eternally hoping for the best but bracing for the worst. (Kingston doubles as the predatory bar owner, Sleaze.) 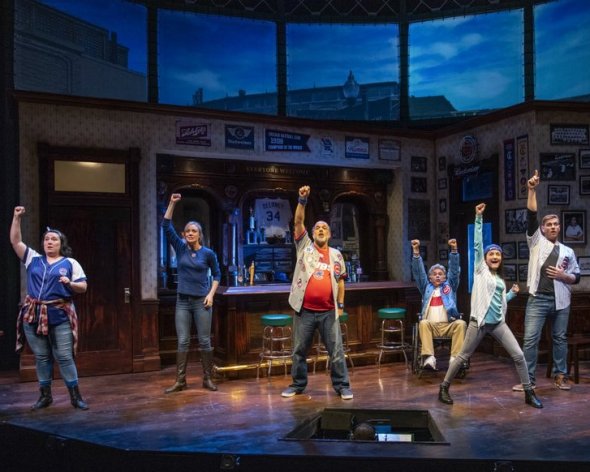 Tuneful and witty songs spice the story-telling in the Cubs musical “Miracle.”

Mahler’s score, packed with tuneful, often witty songs with such pitch-perfect titles as “The Cubby Bear Blues,” “#FlytheW,” and “I Hate the Cold,” stretches effortlessly from quiet ballad to pop anthem, hip-hip, disco and tango. Butler-Duplessis struts his considerable stuff in several numbers, and Elise Wolf sends the tender melody of “Look for a Miracle” sweetly soaring to heaven’s door. A musical high point is “Just Imagine,” Sleaze’s hellish vision of the Wrigleyville bar of the future. (Some disgruntled Cubs fans will say it’s already here.)  Dancers in red sequined baseball jackets slither and slink amid shadowy shafts of purple and red light. This is a place to trash talk last night’s hookup, not yesterday’s closing pitcher.

A final word in defense of the show’s clichés. During the 2016 season, Cubs fans did visit cemeteries to commune with the deceased parents or grandparents or aunts or uncles who had introduced them to Wrigley’s lovable losers. (My resident Cubs fan left World Series pins on the graves of his parents in Palm Springs, Cal.) After Game 4, with Cleveland one game away from winning the Series, despairing Cubs fans did sink to their knees and pound the floor. They did slump in their chairs, slack-jawed before the TV screen, too stunned to speak. Charlie’s wife, a public school teacher worried that funding cutbacks will eliminate her job? Front page news in Chicago year after year. The clichés of Miracle are ones many audience members have lived through more than once.

Sometimes you can beat fun at the old ballpark, especially at Wrigley Field when the Cubs are in a slump. But for a feel-good reprise of the glory days, head over to “Miracle” at the Royal George. And bring some Kleenex. By the final curtain, you’ll need it.