‘Killing Game’ at Red Orchid: They’re dropping like flies in a wacky plague on all their houses 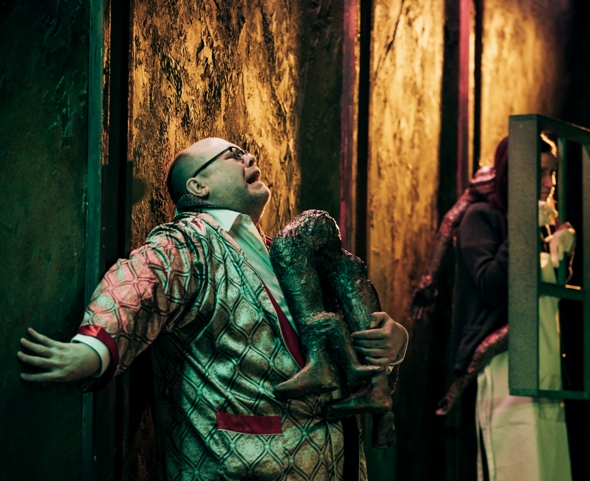 Doug Vickers plays a citizen in a small town panicked by a rash of unexplained deaths in Ionesco’s ‘Killing Game,’ directed by Dado. (Images © Fadeout Foto)

“Killing Game,” by Eugène Ionesco, at A Red Orchid Theatre through June 23. ★★★★

Does life seem absurd no matter which way you try to connect the dots? Wondering what’s the point? (What with the whole world losing its grip and all.)

I’ve got the play for you – Eugène Ionesco’s “Killing Game” (or “Jeux de massacre” in the original French) by the Rumanian-born French dramatist who crawled out of the devastation of two world wars with a razor-sharp talent for skewering our relentless attempts to make sense of why we are even here on this planet.

“Killing Game” won’t solve the Big Riddle for you. But this imaginative production directed by Dado will provide you with acidly brilliant company at A Red Orchid Theatre, where 13 skilled actors play many, many roles – because otherwise their parts would have been exceedingly brief. The citizens of this small town are dropping dead in dizzying succession, and in often ridiculous fashion, of an unknown cause. 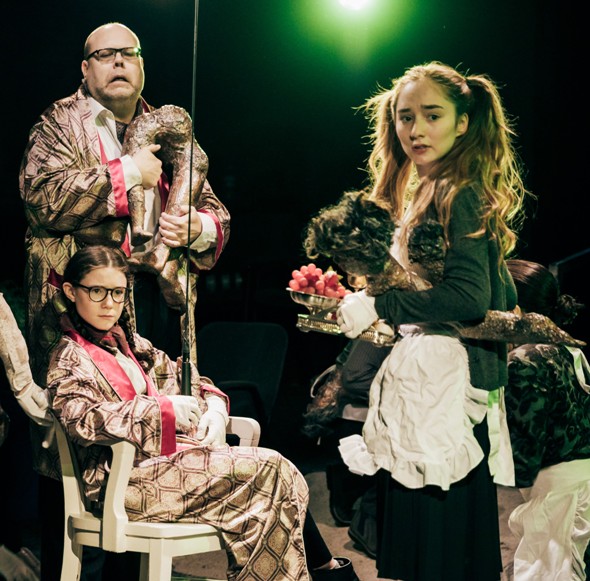 Don’t bother to keep track. They all die. Doug VIckers, Katherine Mallen Kupferer and May Louw Hlava play doomed swells, then come back to play other citizens.

At first, the rattled survivors speculate in wacky ways about the nature of this plague, wagging their fingers at those other districts, those other people, their sinful ways, their money or lack thereof, their dirt, their pets, and pressing for sequestration, hocus pocus, curses, punishment.

The initial self-denial, in the plague’s early stages, is well summed up by the youngest actor, smart fifth-grader Katherine Mallen Kupferer, who plays the formidable wife of a waning man in a building that has been, so far, free of the scourge: “He’s not sick!,” she proclaims repeatedly, with a regal ring of authority, as evidence of the town’s losing bargain with death resounds with a thud.

(Here’s a shout-out to the unidentified actor who plays the silent, crow-like hulk on stilts – a towering grim reaper who hobbles through occasionally. His awesome oversize look was created by puppet designer Samantha Rausch; the cast’s ghoulish threads throughout were by costume designer Kotryna Hilko.)

Ionesco once said he worried the theater public might lose its taste for tragedy because there had been so many disasters in the world people  wanted to forget. But that has not happened, and meanwhile Ionesco’s brilliant dark comedies underscore his oft-repeated belief that “the world is a joke that God has played on man. We enter His game, we join His game.” Scenic designer Grant Sabin’s droll, off-angle, off-kilter, disintegrating world and composer Elenna Sindler’s sly, penetrating music matched that tone.

It should come as no surprise that all semblance of civility disintegrates in “Killing Game” as food itself comes into short supply and people are dying by the “tens of thousands” a month. Should such a disaster actually befall this country, we might not do much better, but the panicky high farce unfolding at A Red Orchid was sufficiently amusing to make you want to hang in there and track the deadly tick-tock. 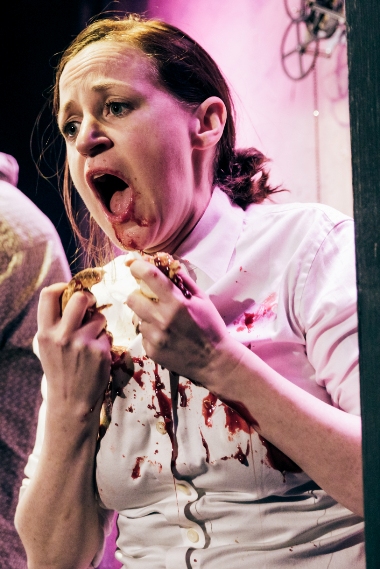 Multiple forms of insanity erupt, with Doug Vickers in several amusing cameos. And there is one exquisite bubble of comic relief – a delicate gentlewoman of some 80 or 90 years (Lance Baker in impossibly blissful drag) and her curmudgeonly male companion (Angela Alise as the equally adorable grump), who float through the fray as if on a cloud of their own truth. A cuddly pairing of serenity and cynicism, they’re surely as crazy as the rest of the small town’s characters; but given the situation’s absurdity, you had to envy their guileless openness to the idea of shunning the real for the come-what-may.