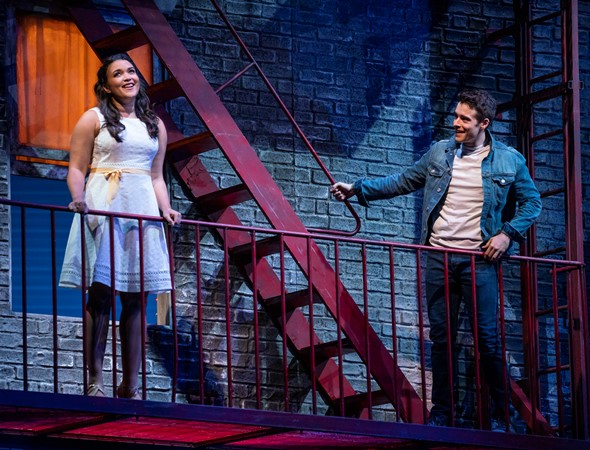 In love on the fire escape: Mikaela Bennett as Maria and Corey Cott as Tony in “West Side Story” at Lyric Opera of Chicago. (Production photos by Todd Rosenberg)

Review: “West Side story,” music by Leonard Bernstein and lyrics by Stephen Sondheim, at Lyric Opera through June 2. ★★★★★

By now, Lyric Opera of Chicago can claim an impressive string of spring musicals, hugely popular explorations of classic Americana that appear like shining exclamation marks at the end of regular opera seasons. The latest, “West Side Story,” well may be the finest. Indeed, you might be hard pressed ever to find a more profoundly satisfying account of this exquisite music-drama, which shares with its model, Shakespeare’s “Romeo and Juliet,” both its bittersweet hope and its timeless tragedy. 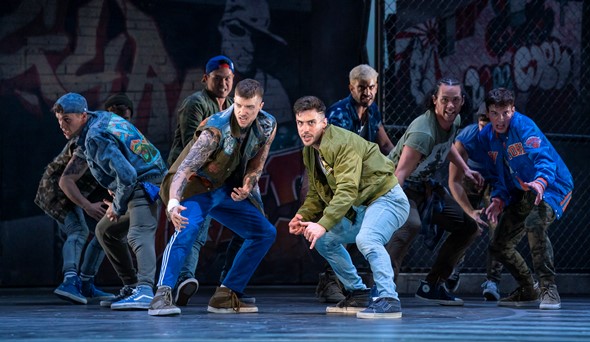 The Jets are ready to rumble in one of the show’s powerful dance numbers.

In the most pervasive sense, this infectious and ultimately heart-crushing account directed by Francesca Zambello is an ensemble achievement, as cohesive and focused as it is honest and fluent and beautiful. As Maria, the Puerto Rican girl newly arrived in America and discovering love for the first time in the forbidden form of the Polish-American Tony, Mikaela Bennett displays a stunning voice that shifts the role toward opera – without overwhelming innocence or tenderness or girlish rapture.

Bennett’s silvery turn through “Somewhere,” essentially a prayer as proclamation that she and Tony will live in peace, is the show’s absolute peak moment – only heightened by the elegant dance, an evocative abstract mime, unfolding in the plaza beneath her balcony. Bennett is well matched musically by Corey Cott’s Tony; their soaring duet in “Tonight” stamps these two as instantly bound hand and heart, star-crossed or no.

Tony has two solo numbers before Maria ever sings a note, and Cott immediately proves his formidable vocal mettle in a handsomely contoured “Something’s Coming,” soon followed by his radiant, starry-eyed “Maria.” Cott is wholly believable as a youth who has become more man than kid, a former member of the Jets gang who has grown out of the street fray and now seeks something bigger, more serious and lasting. 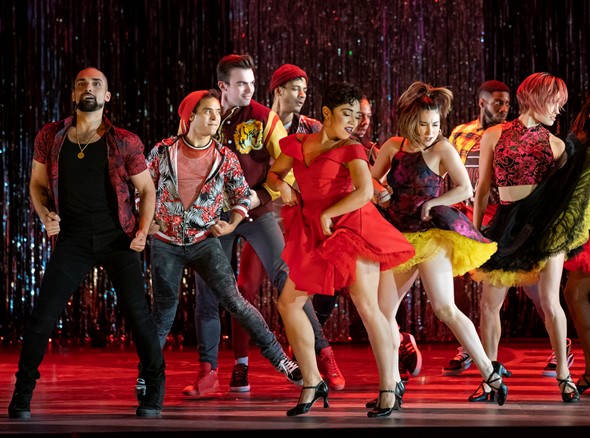 Anita (Amanda Castro, center) leads the Puerto Ricans in the dance at the gym. At left is her boyfriend and Sharks leader Bernardo (Manuel Stark Santos).

All that said, whenever Amanda Castro’s Anita comes into view, she owns the stage. This worldly, sexy flint to Sharks leader Bernardo’s steel possesses charms that never quit. Castro is a torrid dancer, and her droll call-and-response routine with the other Puerto Rican girls in “America” – that piquant debate on the comparative allure of their old home and Manhattan – brought down the house. As Bernardo, Manuel Stark Santos cuts a lean, sure figure with a no-nonsense style but also with a palpable sense of responsibility for his little sister Maria. Santos’ upright presence stands as a potent reminder that Bernardo is not the bad guy in all this: There’s plenty of hatred and prejudice on both sides of the community divide.

Which brings us to the gangs and the wealth of brilliant dancing that takes this show to a transcendent place. The lusty dance at the gym sets up a culture clash that’s basically a stylized, high-spirited, bloodless rumble. When the warring gangs really do come to blows under the bridge, the choreography only underscores the ingrained mentality of mutual distrust and conflict. And again, that muted physical accompaniment in the plaza to Bennett’s ethereal “Somewhere” reflects the expressive precision – as well as the hand-in-glove collaboration – of stage direction and choreography. 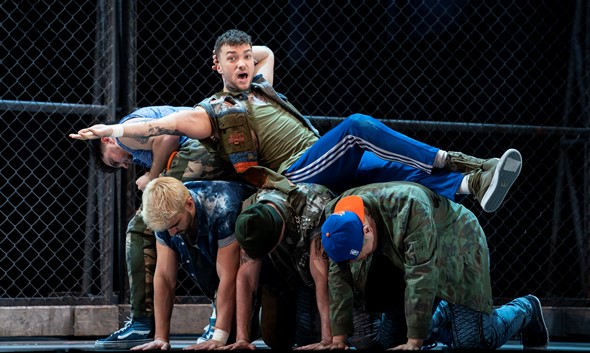 Jets gang member Action (Adam Soniak) is on the couch to analyze why he’s just no good, in the sociological send-up “Gee, Officer Krupke.”

A ringing high point is the Jets’ acerbic self-analysis in their parody “Gee, Officer Krupke.” Though musically little more than a repetitive ditty, it is laced with Sondheim’s wry, pungent lyrics about alienation and how these lost kids have become a “social disease.” By quick, vibrant, physical turns, these very appealing actor-dancers take turns sending up society’s diagnosis of why they’re delinquents and losers. It’s hysterically funny and yet edged with real pathos.