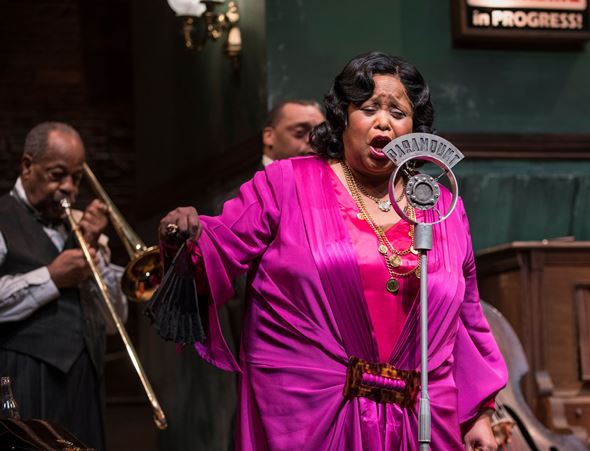 It’s 1927, and the veteran blues singer Ma Rainey – or Madame Rainey, as she prefers – is the imperious queen of her realm. The black songstress has been around, and she doesn’t take any grief from anybody, including white folks. Brash trumpeter Levee, who’s playing a Chicago recording session with Rainey, is still finding his way. He’s young, gifted and black. And deeply angry. Indeed, it’s hard to say which is Levee’s greater portion: his talent or his rage.

These two are the fire and ice of August Wilson’s towering tragedy “Ma Rainey’s Black Bottom,” now in the sure hands of director Ron OJ Parson and a stellar cast at Writers Theatre. 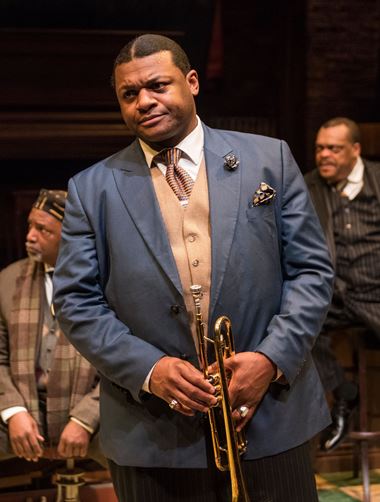 Levee (Kelvin Roston, Jr.) has big dreams in his head but a mountain of anger in his heart.

Front to back, or in this case upstairs and down, Writers’ production is exemplary theater. Designer Todd Rosenthal’s detailed, functional two-level set – a converted church with cross and stained glass windows still in evidence – might be a good place to start: It provides a downstairs lounge for the band and an upper-tier recording space with a producer’s room above that.

A clutch of Chicago’s most accomplished actors, among them some old hands at Wilson’s so-called Pittsburgh cycle of 10 plays, create the impression of a living portrait; and Parson is the artist holding the brush: an absolute master of Wilson’s dramas who invariably finds the texture and density, the personality and pitch that define each installment. Typical of the director’s approach to these plays, “Ma Rainey’s Black Bottom” possesses a conversational ease, a permeating fluency. We are peering in through an open window.

The set-up is a Ma Rainey recording session to lay down, among other things, the play’s title song. The two high-strung white guys ostensibly running this gig, the producer (Thomas J. Cox) and Rainey’s manager (Peter Moore: “Just, just let me handle it”), show up early – as if to get a jump-start on worrying. The session band isn’t far behind: bassist Slow Drag, trombonist Cutler, pianist Toledo and the hotshot trumpeter Levee.

If Rainey – who’s always late – rules the session upstairs, the band room below belongs to the guys. That’s where we get to know them as they banter, needle each other and reveal their personal histories. In many of Wilson’s plays we find a character analogous to Shakespeare’s fools, but here that amusing and provocative personality is more evocative of the worldly philosopher Jaques in “As You Like It.” Toledo is an astute pundit, well read and articulate. David Alan Anderson lends this quick-witted man with bad shoes an air of self-assurance, worldliness and, well, superiority. 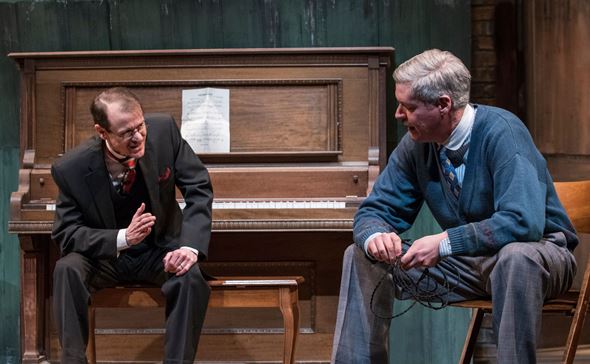 His opposite perhaps is Cutler, who spends much of his time in the band room preparing reefers and tempering Toledo’s high-minded ideas with common sense. Alfred H. Wilson’s appealing portrait of Cutler offers a modest soul who knows himself, knows his place in the scheme of this job and just wants to keep the band focused. Then there’s A.C. Smith’s droll, circumspect Slow Drag, who allows himself to be induced to tell again the story of how he got his name, paired up with a hot mama in a dance contest back in the day, down home in the South. An imposing figure, Smith also does a riotous imitation of Ma Rainey in full performance mode.

All three men are in middle-age, about Ma Rainey’s age, a generation older than the flashy trumpeter Levee, who makes his entrance with a shoe box under this arm. New shoes, and not just any shoes. These dazzling examples of footwear are guaranteed to catch the eye of a pretty gal. These shoes – man, these shoes you’d kill for. Levee puts them on, struts about beaming, a very mirror of his classy shoes. 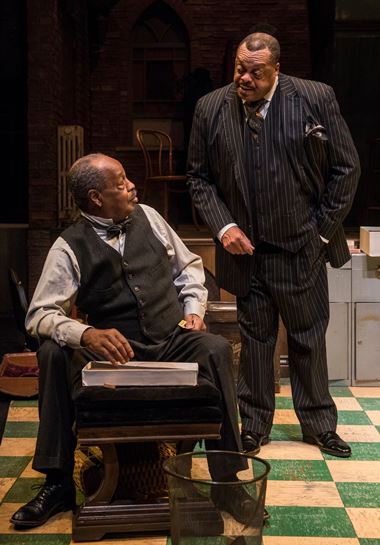 Cutler (Alfred H. Wilson) and Slow Drag (A.C. Smith) go way back, and so does Slow Drag’s mooching for a reefer.

Levee is the vessel for Wilson’s most searing and brilliant writing. The show hangs on the credibility of Levee as star-stuff, a star in the making. Kelvin Roston, Jr., radiates the birthright confidence of genius. Levee embodies music’s next wave; he’s bursting with ideas. He’s unstoppable. He’s also bleeding at his core.

There are two blazing monologues in this show, and both fall to Levee. They bespeak an agony that cannot be assuaged: two perspectives on the same hideous moment in childhood. Roston delivered the first with concentrated heat: how a group of white men came into Levee’s family home when his father was away and ravaged his mother unspeakably; his father’s vengeance; his father’s death. The second speech was pure fury uncapped, a roaring rejection of trombonist Cutler’s God, that God who did not seem to hear Levee’s mother in her sobbing pleas, though the child heard them well enough. The boy had even tried to help her; God did nothing.

Inevitably, Levee clashes with Ma – er, Madame – Rainey. Felicia P. Fields’ evenly voiced but immovable Ma Rainey is a pistol. (She carries one, too.) The grand dame has in tow a stuttering nephew (Jalen Gilbert), who she insists must do a spoken lead-in to one song, and her pretty young girlfriend (Tiffany Renee Johnson), who catches Levee’s eye. But Ma Rainey is not Levee’s ultimate problem. The rub is the rain that raineth on his big plans – the “sorry, kid” that’s shoved into his shirt pocket along with a few bucks.

Whither the beautiful dream? Can he have nothing? Someone might as well step on his fine new shoes.