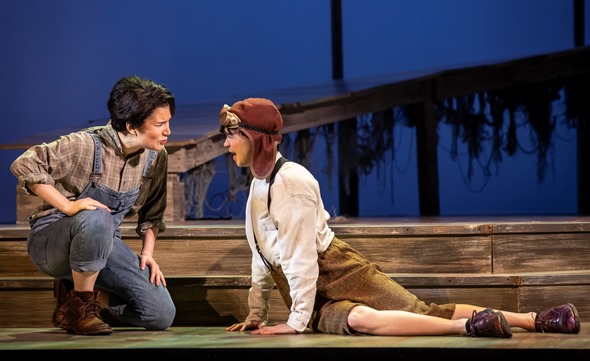 Review: “The Scarlet Ibis,” music by Stefan Weisman and libretto by David Cote, at Chicago Opera Theater through Feb. 24. ★★★★★

The relationship between two brothers can be complicated in the best of times. But it can be even harder if the younger one is disabled, and the other vacillates from feelings of care and protection to selfishly pining for a “normal” sibling. 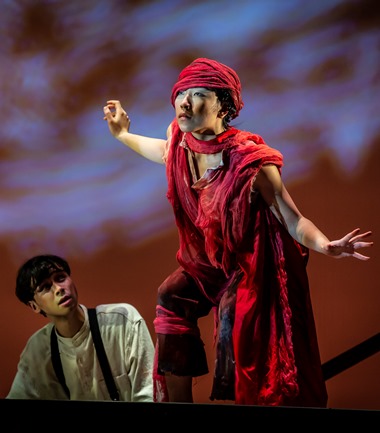 Doodle (Jordan Rutter) gets a close look at a scarlet ibis (Ginny Ngo).

Such a conflicted brotherly dynamic is at the heart of composer Stefan Weisman’s extraordinary operatic adaptation of The Scarlet Ibis, a celebrated short story by James Hurst that first appeared in The Atlantic Monthly in July 1960. Although essentially a very simple plot set in early 20th-century North Carolina, this 95-minute opera reveals layers of meaning and symbolism and blurs intense naturalism with a kind of dreamy magical realism. It manages to be at once touching and tender, tough and unflinching.

In just the second professional production of The Scarlet Ibis since its 2015 debut at New York’s PROTOTYPE Opera Festival, Chicago Opera Theater offered the first of three performances Feb. 16 in the 691-seat Studebaker Theater. It was an  incisive and gripping realization that captured the full power and depth of this chamber work. From the spot-on casting to the nuanced lighting, nothing was out of place.

The opera digs in right from opening seconds with a harrowing delivery of a baby taking place on one side of the stage while his soon-to-be older brother (known simply as Brother), plays elsewhere with his Civil War toy soldiers, oblivious at first as to what is happening. Once the newborn boy finally comes without the help of a doctor, he is so small and malformed that the saddened father immediately goes to his shop to build a tiny wooden coffin in anticipation of the infant’s sure death. But the boy doesn’t die, and his parents task Brother with taking care of the vulnerable child, something he does with decidedly mixed feelings. Early on, affectionately or not so affectionately, he labels his little brother Doodle, taking the nickname from the clumsy maneuverings of the doodlebug. 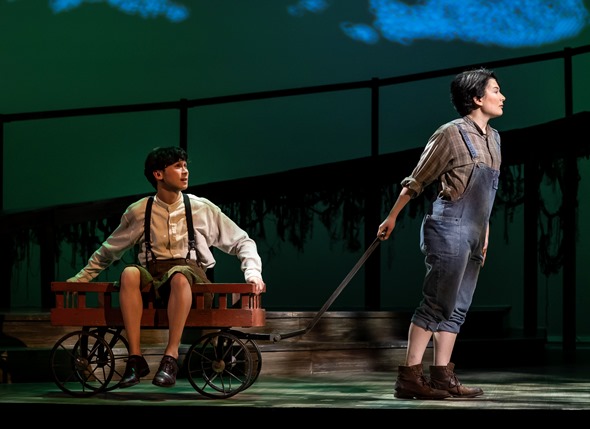 Wherever they go, Brother (Annie Rosen) must haul Doodle (Jordan Rutter) in a wagon.

Librettist David Cote, a playwright who has worked on three other operas, including Weisman’s Fade, did a masterful job of filling out the original short story and adapting it to the stage. The opera unfolds episodically in 13 scenes, with Cote taking care to leave plenty of room for the music to complete the story and fill in the swirl of emotions. He invests the story with a sense of humanity and occasional touches of needed comic relief, making the boys seem like boys and investing their carefree and fraught relationship with believable and compelling complexity. At the same time, he brilliantly conjures the pervasive sense of time and place that is so important to this story, helping the audience to imagine a Southern swamp that it never sees, and provides hints – like the mention of a neighbor’s child who dies on a faraway battlefield – that all the action is happening during World War I.

Toward the end of the story, Doodle discovers what is determined to be a scarlet ibis, a bright red bird that typically inhabits the South American tropics and would normally never be seen as far north as North Carolina. We soon realize that the scarlet ibis is a symbol for Doodle; both are creatures that are out of place. At the end of the opera, in a scene even more intense than the baby’s delivery at the beginning, Brother has Doodle practicing his rowing in a boat on the swamp as a giant storm hits. As they rush to cover, Brother leaves him alone briefly and then runs back to find him bleeding from his mouth, the red blood summoning the image of the scarlet ibis. Like the bird, Doodle couldn’t sustain the strain of his journey in what was for him every bit as much a foreign land as North Carolina was to the ibis. As important as a good libretto is, it is nonetheless the music that makes an opera, and Weisman has excelled here, with a rich, appealing score that changes constantly to fit the moment. It is sometimes percussion-driven and discordant, often quiet and affecting but always profoundly evocative. The composer employs a small orchestra (effectively led here by David Hanlon) comprising just five strings plus oboe, clarinet/bass clarinet, bassoon, and mixed percussion (all admirably performed in this production by one player – David Victor) yet manages to make it seem much larger. Especially prominent, though perhaps unexpected, is the vibraphone, which Weisman uses to set the mood and conjure the opera’s sometimes other-worldly quality. Except for a hymn that nearly all of the characters join in singing, the opera contains little in the way of traditional arias or hummable melodies. Yet in their non-sentimental way, the solos and duets, which tend toward what might be called extended recitative, cast an entrancing emotional spell.

When audiences entered the theater, they were immediately transported into the opera’s world by Jack Magaw’s magical set. It consisted of a semicircular wooden dock or boardwalk that curved upward from the left to a platform on the right that stood in for multiple settings, including the father’s workshop and the rowboat in which the boys cross the swamp during the final storm. Spanish moss hung from the bottom of the deck and its wooden supports, driving home the feeling of the locale. At the same time, subtly changing cloud projections and the nuanced lighting by Charlie Cooper suggested changes in time and mood. 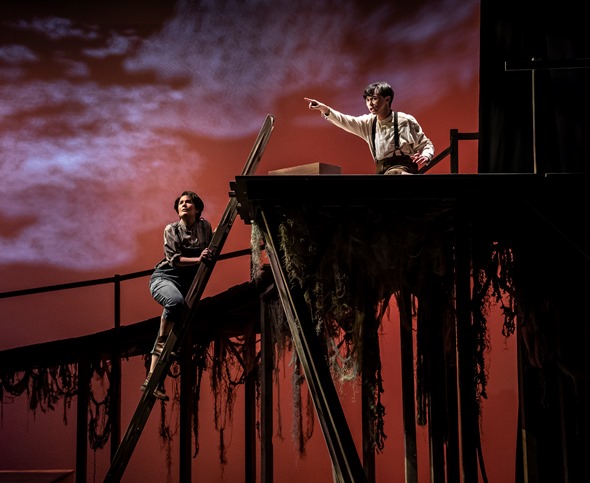 Brother (Annie Rosen) and Doodle (Jordan Rutter) love the mysteries of the swamp.

Director Elizabeth Margolius, who is active across Chicago’s theatrical scene, could hardly have been more in tune with this story in her brilliant, subtle staging. She was careful not to smother the simplicity of the story as she negotiated the nuanced balance between the opera’s naturalism and fancy. She used stylized slow motion to suggest the suspension of time or reality, as in the aggrieved father’s climbing to his workshop or Doodle’s fatefully rowing across the swamp. The director realized that, by skillfully capitalizing on Magaw’s set and adding just a few props like a wagon or a pair of oars, the audience’s imagination could fill in any other visuals with the help Weisman’s musical imagery.We never see a swamp, and yet we leave the theater absolutely believing we were there and that we experienced the final storm in all its fury. Perhaps most important, Margolius rightly kept the focus on the intimacy of the relationship between the two brothers, managing the fragile balance of love and malice contained within it.

The most daring aspect of Margolius’ staging was her introduction of a dancer, Ginny Ngo, who early on serves as a kind of doppelgänger for Doodle, shadowing him at certain moments. And at first, this character seemed redundant and distracting. But when Ngo, wrapped in strips of red fabric, portrays the dying scarlet ibis, the symbolism of that bird is driven home. At the end of the opera, Doodle defiantly declares that he doesn’t want to be normal, and it is the doppelgänger – a kind of stand-in for that normality – who perishes in the rain as the true spirit of Doodle is released. 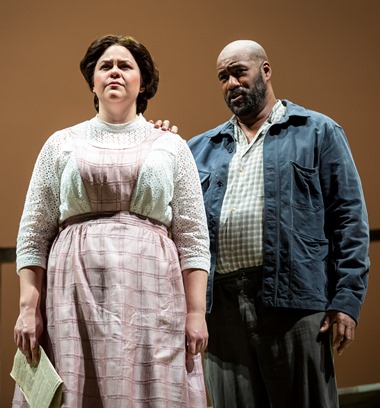 Adding a stratum of complexity to this opera and scrambling traditional notions of gender, Weisman wrote the character of Brother for mezzo-soprano and the role of Doodle for countertenor. And as Weisman points out in his notes in the program, all of the female voices in the opera were set lower than Doodle’s, allowing “his lines to soar above them all.” In the hands of Annie Rosen and Jordan Rutter, both fine actors and singers, this approach worked abundantly well, with Rutter managing to convey both the outer fragility and the inner strength of Doodle as well as the sense of “otherness” that hung over him. At the same time, Rosen was completely convincing as a boy and terrific at conveying both the “Aw, shucks!” sense of this character as well as his deeper, conflicted feelings. The two together just clicked, and they were completely believable as siblings.

Also standing out was Sharmay Musacchio as Auntie, who provided a few moments of comic relief. The contralto adroitly handled the appealing barrel notes that Weisman included for this character, as when she sings about the “nasty, stinkin’ swamp.” The rest of the cast was solid as well – bass-baritone Bill McMurray as the father and mezzo-soprano Quinn Middleman as the mother.

To have the chance to discover an exciting work like The Scarlet Ibis is among the principal reasons for audiences to attend new opera. And given the artistic success of this Chicago production, it seems a sure bet that other companies will be eager to stage it soon.

The opera will be repeated on Feb. 24. For tickets and information, go here.

Kyle MacMillan served as the classical music critic for the Denver Post from 2000 through 2011. He is now a freelance journalist in Chicago, where he contributes regularly to the Chicago Sun-Times and Modern Luxury and writes for such national publications as the Wall Street Journal, Opera News, Chamber Music, and Early Music America. [A version of this review previously appeared at Classical Voice North America.]