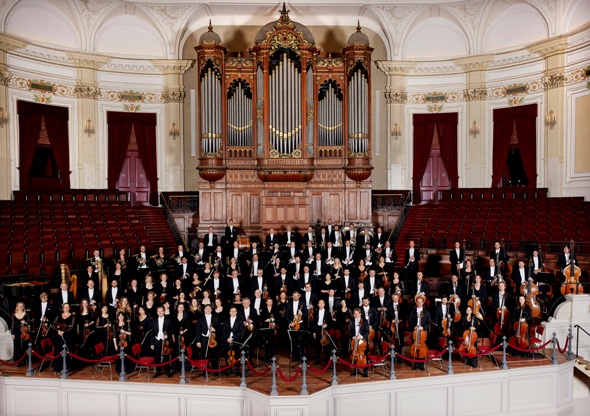 The Royal Concertgebouw, one of the world’s preeminent orchestras, included Chicago in its four city U.S. tour. (Official photo)

There isn’t a concert-going experience much worse than walking through a nearly empty hallway and realizing, along with half a dozen other unlucky ticket holders, that symphonic music is already playing inside.

Brahms’ Symphony No. 4 was unfortunately underway at Orchestra Hall when this latecomer caught up with it. The esteemed Royal Concertgebouw Orchestra was visiting from Amsterdam, midway on a tour that started in Naples, Fla., and would continue to the Kennedy Center in Washington, D.C., and finally New York’s Carnegie Hall Feb.14-15.

The Concertgebouw is a luxurious ensemble, huge and superbly flexible, at 120 players bigger by half than many U.S. orchestras, and 20 players more than the Chicago Symphony’s own. Although I was able to slip in at an early break, I was there only in spirit for the opening of Brahms’ Fourth, which lifts off in a sequence of two-note motifs that’s almost hypnotic.

In the concert hall, listening to Brahms’ last symphony unfold is rather like witnessing a single-celled organism replicate many times over, transforming at a dizzying rate and staking out ever more radical territory. I had to take in the first movement from behind closed doors, but at least I was able to enjoy the program’s other great showpiece, Richard Strauss’ vast tone poem “Ein Heldenleben” (A Hero’s Life) – front to back.

One of the world’s best orchestras, the Concertgebouw is accustomed to touring, tallying 40 concerts away from home each year in cities that span the globe. But tour plans went awry late last summer when Daniele Gatti, then the Concertgebouw’s chief conductor, was abruptly terminated in fallout from the #MeToo movement after a report in the Washington Post  that included troubling Chicago allegations. 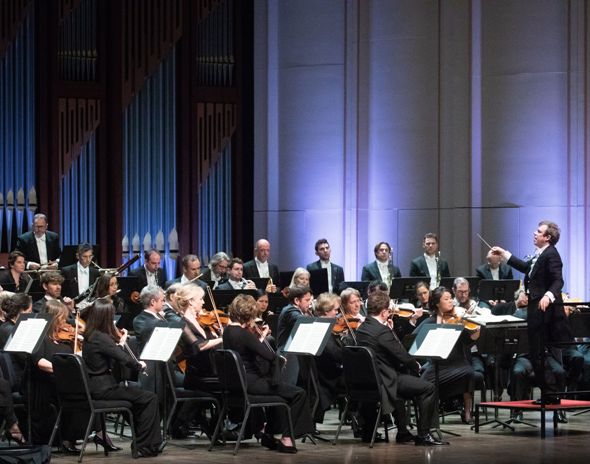 The Dutch orchestra scrambled for replacements, among them the British conductor Daniel Harding, who is finishing up a stint as music director of the Orchestre de Paris this season. But Harding had his own bad luck while in Japan on tour with the Parisians just a few weeks ago, when he slipped in the snow and broke his right ankle. Since then, Harding has been gamely limping through his gigs – as he did in Chicago – or conducting from a chair. One hopes the man has buckets of ice-packs and an arsenal of pain-numbing remedies at the ready, because the Concertgebouw’s grueling four-city, six-concert, seven-day tour would tax an Olympian.

Harding’s approach to the two mighty works on the program was to draw a clear sonic distinction between the 1885 Brahms symphony, which took classical rigor to its summit, and Strauss’ highly personal, barrier-breaking 1897 fantasy for enormous orchestral forces. “Ein Heldenleben” exploded with sound reverberating from the depths, gloried in woodwind sparkle and boasted the awesome grandeur of the Concertgebouw’s brass and battery.

If Harding was pacing himself, it was at the expense of Brahms. Holding onto the support bar occasionally, he seemed to concentrate on shaping the larger melodic arcs. While there was delicacy to admire in the slow movement, one missed the true intensity that would have made softest passages breathtaking. The jocose third movement lacked its thrusting rhythmic counterpunches. And the towering, brilliant finale – a massive movement that hangs on a repeating chordal structure – seemed a thing of parts without much of a dramatic plan.

But the payoff came in the Strauss, which doubtless took the last ounce of the valiant conductor’s energy, although the orchestra had an abundant supply. This traversal of “Ein Heldenleben” was quite wonderful, a rising of gloriously deep-seated sound. I can’t imagine squeezing another musician onto that vigorously packed stage floor, embellished with an abundance of cellos and basses. We were given a vividly emotional portrait of a hero, his pesky belittlers, soaring quests and a transcendent farewell, by an orchestra that seemed to know the music by heart, so naturally did it play. Special mention is due concertmaster Liviu Prunaru, whose violin portrait of Strauss’ mercurial wife Pauline, for all its frank mockery, was one gorgeous valentine. 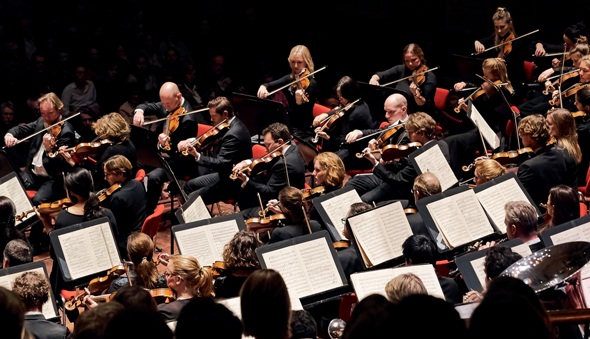 While the Chicago Symphony Orchestra reigns supreme under music director Riccardo Muti, it has been among the treats of each season to hear other top orchestras make tour stops to perform in Chicago’s hall. The Vienna and Berlin Philharmonics have been here on multiple occasions, but not since 2003 and 2009, respectively. Further, as it becomes more expensive to tour, the world’s orchestras are simply visiting less. So far at least, the Symphony Center’s orchestra series has been able to afford interesting ensembles. By any standard, the Concertgebouw date was exceptional good fortune.

Next season, on Nov. 19, the hot ticket is undoubtedly the Orchestre Métropolitain de Montréal, led by Yannick Nézet-Séguin, with the brilliant mezzo-soprano Joyce DiDonato singing Mozart concert arias. The French Canadian conductor, whom everyone calls Yah-neek, is also music director of both the Metropolitan Opera and the Philadelphia Orchestra.