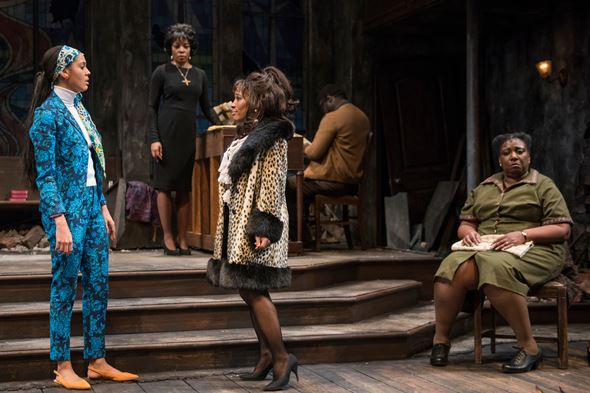 If you’re a serious theater buff, go directly to the Northlight schedule of performances for Christina Ham’s “Nina Simone: Four Women,” and find a night that works for you. This disarming play-with-song about the great jazz and blues singer’s conversion to black activist – but more than that, about black women in their skin – is simply not to be missed. 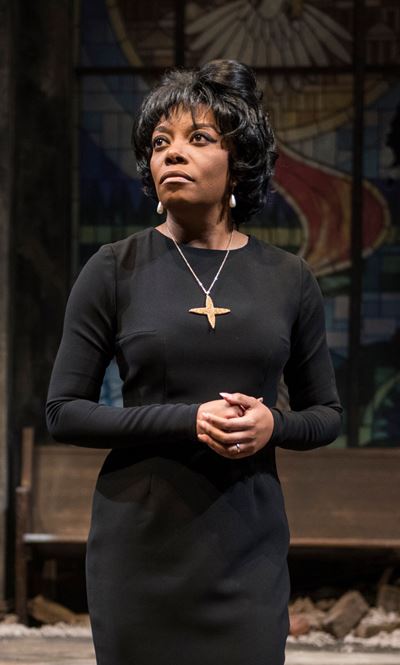 At the outset, Nina Simone (Sydney Charles) is aloof and  condescending.

Ham’s raw, funny and deeply painful drama is set in a bombed Birmingham church — the rubbled design of Christopher Rhoton, deftly lit by Lee Fiskness — during the civil rights turmoil of the 1960s. It takes an unflinching look at the black condition from the perspectives of four women from radically different lives and backgrounds. In a tightly woven narrative energized by incisive dialogue, the play makes a spiritual journey from bleakness and uncertainty to fierce affirmation.

The scene outside the shattered church is tumultuous, tense and dangerous. Inside, alone except for her pianist, an elegantly dressed and poised black woman pores over sheet music, seemingly oblivious to the world in riot just beyond those blown-out windows.  This is Nina Simone (1933-2003) in the patrician form of Sydney Charles), songstress extraordinaire, celebrated in the entertainment world for both her authoritative voice and her great stylistic range.

But she’s just a visitor here; some might recognize the star in their midst, but most probably would pause at the sight of this smartly attired lady without having a clue. That’s exactly the case with the first woman to burst into the church, seeking shelter from the storm, from the riot police and their fire hoses. She is Sarah, an ample middle-aged woman who knows the meaning of hard work and meager wages. She does not know what to make of the queenly figure before her.

Sarah, the earthy and honest Deanna Reed-Foster, tries to take Simone’s measure, to assay what she’s made of. It’s a forthright and amusing exchange as Reed-Foster’s earnest albeit unprepossessing Sarah probes around the edges of Charles’ striking, self-assured and not a little condescending Simone. 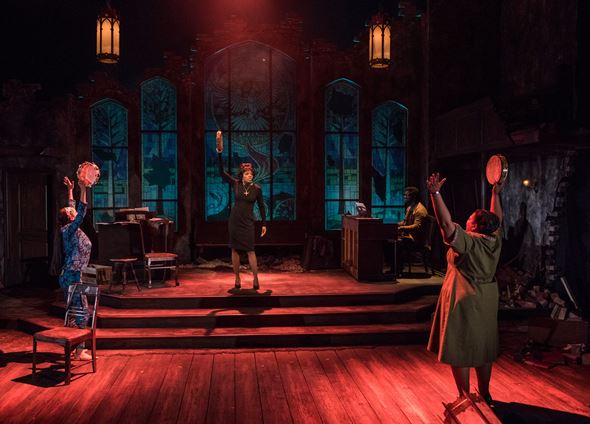 Next on the scene is quite a different specimen: pretty, slim, nearly white Sephronia – a yella gal whose blackness is easily concealed. But Sephronia (the buoyant but vulnerable Ariel Richardson) has done what the other two women have never ventured: She has marched for the cause of civil rights. Don’t talk to her about who’s black and who’s only sorta; her hair may flow in a natural ponytail, but she has walked the walk.

Last through the door, crashing into view with a vengeance, with an alluring chestnut wig and a very short skirt, is, well, Sweet Thing. Oh, I didn’t mention the switchblade knife she packs, or the whisky flask. Sweet Thing (played to the sensual, street-toughened hilt by Melanie Brezill) has come looking for Sephronia. It’s about a man. Nina watches the two women wrangling, Sweet Thing waving her blade, until she’s had enough – and in an utterly dismissive gesture shuts down the stunned hooker’s bad-girl routine, like a goddess swatting away a mere mortal. 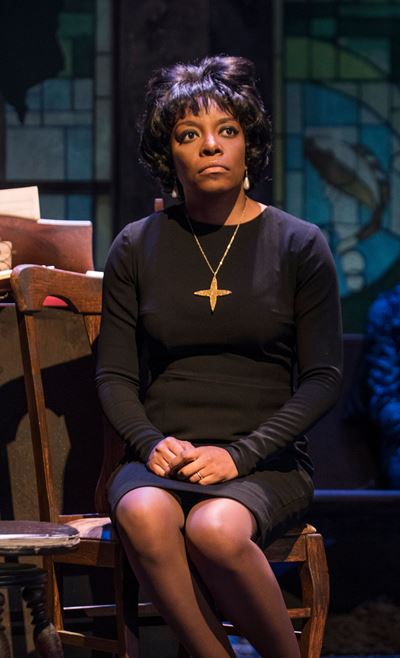 When her authenticity is called into question, Nina Simone (Sydney Charles) drops her veil of superiority.

Throughout these exchanges, the four women challenge and needle each other, essentially over the relative rank of their badges of blackness. Charles’ aloof Nina declares that she has seen the light: From now on, her music will be dedicated to the war against injustice, against oppression, against Jim Crow in all his forms. But Sweet Thing calls her out, calls out her expensive look, the quality of her anger, her authenticity.

What follows is a veritable transmigration. The shaken queen removes her crown, her robes, her aura of majesty altogether. In a blazing, soul-searching monologue that Charles imbues with equal parts of pain and sorrow, Nina modulates into every black woman, bearing the native wounds that will not heal in a world poisoned against her. The contained artifice of the proud singer dissolves in a masterful flourish by a wholly immersed actor.

I called the show a play-with-song, and indeed it is punctuated by Charles’ strong delivery of solo numbers – capped by Nina Simone’s anthem of rage “Mississippi Goddam – as well as resonant ensemble singing by fine voices all around. And onstage pianist Daniel Riley lends sophisticated support. But the basic script is so well honed that it would compel respect and offer revelation even without music. Director Kenneth L. Roberson keeps the four characters in constant flow, their comings and goings and interconnections unforced, believable and affecting.