Preview: The opera company’s 2019-20 season will bring three complete cycles of the “Ring” and a night of Donizetti queens.

The consummation of a four-year project to produce Wagner’s “Ring” cycle and the beginning of a “five- or six-year” exploration of early Verdi highlight plans for the Lyric Opera of Chicago’s 2019-20 season, which also marks the 20th anniversary of Andrew Davis’ tenure as music director.

After annual creations of Wagner’s “Das Rheingold,” “Die Walküre” and “Siegfried,” the Lyric will cap the “Ring” cycle with “Götterdämmerung” in April 2020, then pull the whole enterprise together with three turns through the complete tetralogy, also in April. Mounting the “Ring 2020” cycle is expected to draw international crowds for weeklong total immersions. 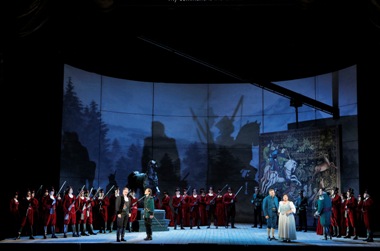 The Verdi retrospective begins with “Luisa Miller,” his 1849 opera about tragic young lovers destroyed by class conflict, jealous intrigue and family squabbles. While Davis and general director Anthony Freud were noncommittal about specific works that might be staged, other early Verdi operas — on a considerable list of works preceding “Rigoletto” — include the likes of “Nabucco,” “I lombardi alla prima crociata,” “Ernani,” “Atilla” and “Macbeth.”

In light of the massive “Ring” venture, Lyric will reduce its usual eight productions to seven, but will spotlight bel canto soprano Sondra Radvanovsky in grand finales from three Donizetti operas about English queens: “Anna Bolena,” “Maria Stuarda,” and “Roberto Devereux.” There will be three performances of the “Three Queens” program – Dec. 1, 4,  and 7.

On tap for the Lyric’s annual spring musical in 2020 is the classic “42nd Street.” Freud characterized the show as “a gorgeous new-to-Chicago production from the Théâtre du Châtelet in Paris that will have our audiences tap-dancing their way out of the theater.”

Notable new faces at the Lyric will include:

Here’s a quick list of the shows in Lyric Opera of Chicago’s 2019-20 season (see below for casting and production details): 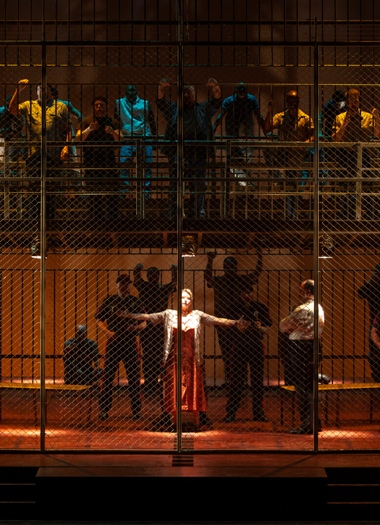 Scene from Jake Haggie’s “Dead Man Walking,” in the Houston Opera production to be seen on the Lyric stage. (Felix Sanchez)

And the legendary Welsh bass-baritone Bryn Terfel will return to the Lyric for the first time in 15 years in February of 2020 for a recital.Terfel has created many roles at the Lyric in the past, including Figaro, Don Giovanni, Falstaff, and Sweeney Todd. 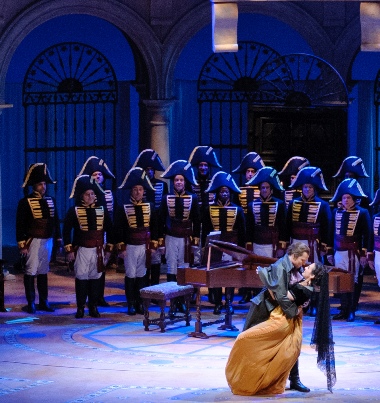 The Lyric will revive its production of Rossini’s ever-popular comedy “The Barber of Seville.” (Robert Kusel)

Irrepressible Rosina refuses to marry her pompous old guardian. A bold young count hopes to win Rosina for himself, but how? Leave it to the resourceful rascal Figaro to get the sweethearts together with a series of slapstick schemes

Luisa loves Rodolfo, the son of a ruthless, unethical nobleman whom Luisa’s father loathes. It’s a feast of atar-crossed love and violent jealousy. .

A young couple is brutally killed, and the convicted murderer, Joseph De Rocher, sits on death row with Sister Helen Prejean as spiritual adviser. Based on the novel by Sister Helen. 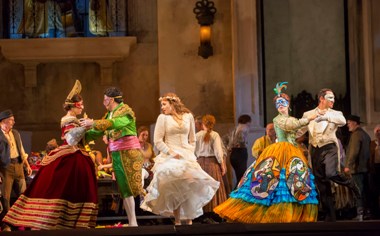 Director Robert Falls’ take on Mozart’s “Don Giovanni” will be revisited at the Lyric next season. (Todd Rosenberg)

An irresistible libertine who lives only for his own pleasure, Don Giovanni is the quintessential anti-hero in Mozart’s comedy of seduction. Giovanni is assisted his frustrated servant Leporello as he variously evades and pursues the beauties who catch his eye.

Three extraordinary historical women grace Donizetti’s “Three Queens” trilogy: passionate Anne Boleyn, proud Mary Stuart, and mighty Queen Elizabeth I. Each is a stupendous role for a true singing actress, and Lyric favorite Sondra Radvanovsky commanded all three of these roles
in a single season at the Metropolitan Opera. She’ll sing the finales of all three operas in semi-staged performances featuring the Lyric Opera Orchestra and Chorus, along with artists from the Ryan Opera Center.

An enchanting geisha, Cio-Cio-San, falls in love with and marries an American naval lieutenant, a union that ultimately leads to total disaster for the bride. 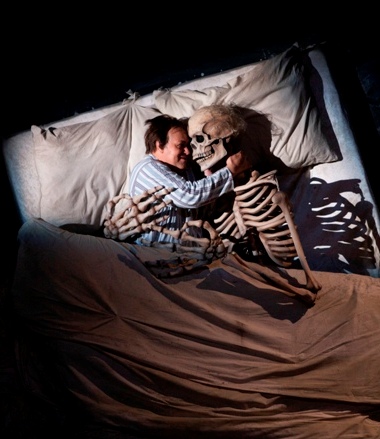 Tchaikovsky’s brooding thriller is a tour de force for a great tenor. He plays the terrifyingly obsessed Gherman, an unhappy soldier desperate to know a secret hidden by an aging countess – the mystery of winning at cards.

The tragedy of the warrior-maiden Brünnhilde, her beloved hero Siegfried, and all the gods, brings nothing less than the end of one world, the beginning of a new one, and the ultimate triumph of love over evil. 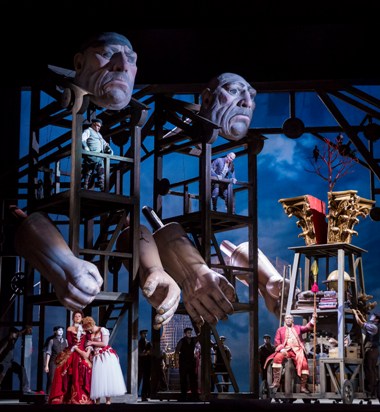 Brünnhilde is put to sleep by Wotan in Lyric’s production of ‘Die Walküre.’ (Cory Weaver)

“Siegfried”
Three performances, April 16, 23, May 1, 2020
Same conductor and production team as “Götterdämmerung” above

“Götterdämmerung” (Twilight of the Gods)
Three performances, April 18, 25, May 3, 2020
Same cast, conductor, and production team as above

Out-of-town Ring patrons will have access to specially priced accommodations at a variety of hotels. For more information please visit lyricopera.org/RING.

The backstage musical comedy classic, “42nd Street” is the song-and-dance fable of Broadway with an American Dream story. It contains some of the greatest songs ever written, such as “We’re In The Money,” “Lullaby of Broadway,” “Shuffe Off To Buffalo,” “Dames,” “I Only
Have Eyes For You,” and of course, “42nd Street.” A starry-eyed young dancer becomes a star.

The conductor and cast for 42nd Street will be announced at a later date.

“Blue” brings audiences into the emotional epicenter of an African-American family in which the father is a police offcer and the son is a politically active teenager. When the son is killed by police, his death brings to reality the mother’s worst fear, and ignites anger and devastation in
the father.

The conductor and cast for Blue will be announced at a later date.

A free concert under the stars features artists of Lyric’s new season, along with the Lyric Opera Orchestra and Chorus and members of the Ryan Opera Center. Lyric’s music director Sir Andrew Davis will conduct.