‘The Lightning Thief’: An off-beat musical pits off-the-chart kids against all odds, and gods 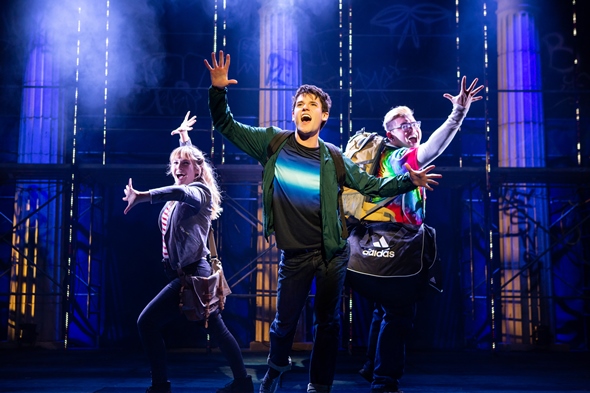 Chris McCarrell, center, heads the cast of ‘The Lightning Thief as Percy Jackson, a boy in search of his father, his identity and a bolt of lightning. (Production photos by Jeremy Daniel)

Review: “The Lightning Thief,” music and lyrics by Bob Rokicki. Presented by Broaday in Chicago; Oriental Theatre thru Jan. 13. ★★★

“The Lightning Thief,” a musical making a lightning pass through Chicago as the launch point of a national tour, is a charming, off-beat coming-of-age show. It’s like the graphic novel brought to life – colorful, energetic, simpler than its busyness makes it seem. Still, in its benign fashion, “The Lightning Thief” proves agreeable enough, if a bit overwrought and underdone in the end. 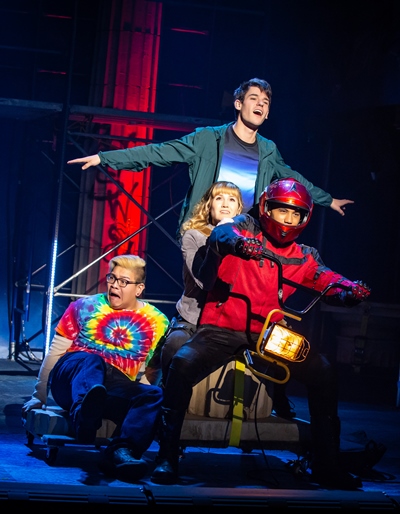 Percy and his friends hop a motorcycle en route to the Underworld.

Like the 2010 fantasy film, the musical is based on Rick Riordan’s 2005 novel by the same title. A Nintendo video game based on the film was released in 2010, and since then millions of tweeners have become Percy Jackson fans.

The play involves a group of adolescents who, not unlike the Lost Boys in “Peter Pan,” are hiding from themselves just beyond the fringe of adult society. In this story, the troubled kids bear the stigma of “half-bloods”: They are half mortal and half, well, immortal — the modern-day offspring of the old Greek gods. Which means they all suffer the total neglect of a godly parent (Athena, god of arts and wisdom as well as war; Poseidon, god of the seas; Dionysus, god of wine and theater, etc.); but, if they’re lucky, they enjoy the care of the mortal half of that coupling.

Obviously, the psychological ramifications are as complex as they are crucial to the story, which centers on a boy called Percy Jackson, who doesn’t know who his godly father is. In the show’s most impressive moment, Percy (played and sung with appealing voice and personality by Chris McCarrell) watches in horror as the Minotaur – a fearsome monster half man and half bull – kills his mother, who dies protecting him. Surprising even himself, Percy become superhero takes instant vengeance when his pen magically transforms into a sword.

But the heart of the story is Percy’s quest for what is essentially a holy grail. In this case, however, the boy undertakes to find a lightning bolt that has been stolen from the god-king Zeus. Unless Percy can find and return the lightning, war could erupt between the gods. 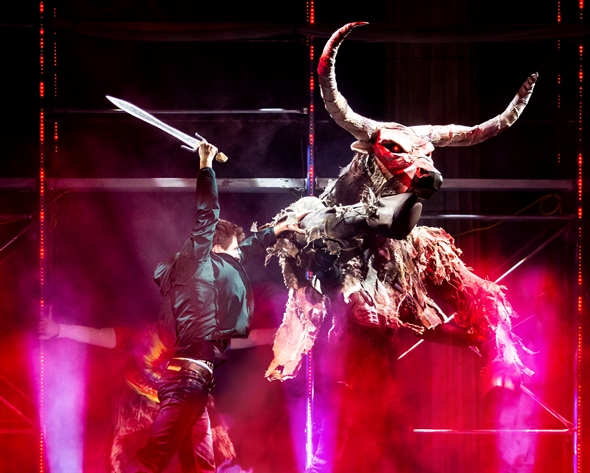 Percy wields a pen-become-sword to kill the monstrous Minotaur.

It’s a rather flimsy, not to say murky and silly, premise, but Percy accepts the challenge; and with the help of his half-blood pals Annabeth (Athena’s child, played by the vivacious Kristin Stokes) and Grover (a satyr, half-goat and half man, and affectingly inhabited by Jorrel Javier), he sets off for the Underworld as the likeliest place to find the missing bolt.

All of this is punctuated and elaborated by some 19 well-crafted songs with consistently clever lyrics that bespeak the anxiety as well as the insight and resolve of youngsters trying to locate much more than a lightning bolt: They are different from other kids, and they’re desperate to find meaning in their lives and their place in an alien world. The most powerful and persuasive turn in the show comes when these young seekers realize their own accountability: At “summer camp,” away from home and beyond the succor of their parents, they must find their answers, their lighting, within themselves. 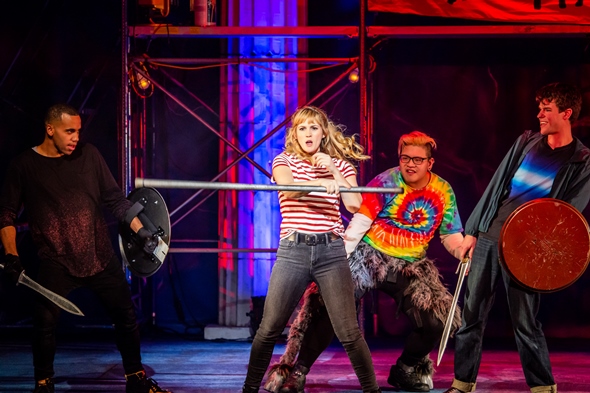 This touring company is animated in spirit as well as action. McCarrell’s sympathetic lead enjoys a vibrant supporting cast – not least the versatile Ryan Knowles, who switches in and out of assorted characters godly, mortal and mixed. Jalynn Steele, also in multiple roles, flashes the finest singing of the night as a soulful golden-garbed Charon, the Underworld ferryman – OK, ferryperson – who pilots Percy and his friends to the shores of the departed.

The whole journey to the Underworld makes for great production fun, as Percy and his friends move from bus to motorcycle to boat – all creatively fashioned from odd pieces pulled from “off-stage” parts that are actually in full view of the audience.

You don’t need to know a thing about Greek mythology to get a kick out of this show. It’s all spelled out for you. But chances are, you’ll come away believing in the eternal verity of these marginalized boys and girls, genuine kids looking for that bolt from the blue.