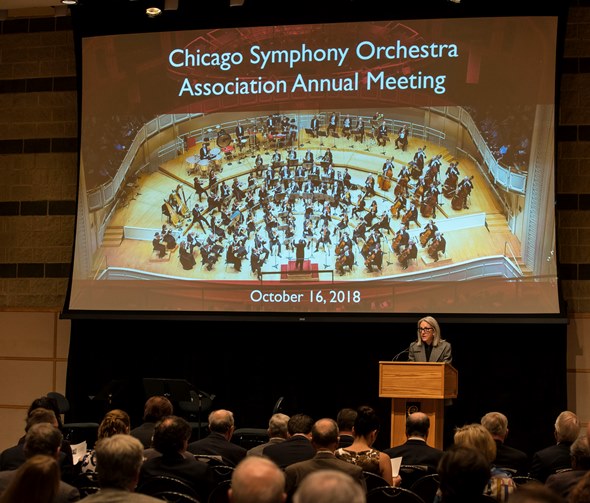 Helen Zell, chair of the CSO board of trustees, presided over the annual meeting at Symphony Center. (Todd Rosenberg photo)

The Chicago Symphony Orchestra Association (CSOA) released the results of fiscal year 2018 (July 1, 2017–June 30, 2018) at its Annual Meeting on October 16, 2018, at Symphony Center. The Chicago Symphony Orchestra marked its 127th season in 2017/18 with a number of significant artistic achievements and moments of community engagement, as well as record-breaking ticket sales, according to Helen Zell, Chair of the Board of Trustees, and CSOA President Jeff Alexander, who presented the artistic and financial highlights of the season.

During the business portion of the meeting, eight new CSOA Trustees were elected to three-year terms and officers of the CSOA board were re-elected, including Helen Zell as Board Chair.

“The 2017/18 season was a wonderful example of the Chicago Symphony Orchestra Association’s profound impact as a cultural leader,” said CSOA Board Chair Helen Zell. “With artistic excellence as their hallmark, our Zell Music Director Riccardo Muti and the Chicago Symphony Orchestra continued to serve as ambassadors for the transformative power of music in the City of Chicago and on the U.S. West and East coasts last season.

“In January, we were extremely pleased to announce that Riccardo Muti would be extending his contract with us through August 2022, allowing the unique artistic combination of Muti and the musicians of the CSO to reach new artistic heights and levels of influence. Strong support for this great Orchestra makes it possible to continue our work to connect audiences in our community, online and across the world with the extraordinary musical resources of the CSO.

“I would like to express my gratitude to our music director, musicians, patrons, staff, donors and volunteers for their renewed commitment to the CSO during the past year.”

“Throughout the 127th season, Riccardo Muti and our extraordinary musicians demonstrated their exceptional artistry and deep commitment to providing access for all audiences in our community and beyond,” added CSOA President Jeff Alexander. “As our Orchestra engages with audiences in a variety of settings I meet individuals from all walks of life who are enriched by our wide range of programs and activities.

“All of these activities are accomplished through the inspired dedication, artistry and skill of our music director and musicians; the support of our Trustees and loyal donors; the continued enthusiasm of our patrons and our staff; and I know that this continued partnership will ensure a bright future for our great Chicago Symphony Orchestra.”

During the 2017/18 season, the CSOA presented 443 programs including concerts, community events and educational activities with the number of free programs growing to 224, up from 200 in the previous year. The season included a noteworthy 63 sold-out concerts, three world premieres of CSO commissions by Pulitzer Prize-winner Jennifer Higdon, CSO Mead Composer-in-Residence Elizabeth Ogonek and CSO Viola Max Raimi (all led by Muti), subscription concerts that marked the 60th anniversary of the Chicago Symphony Chorus and special programs to mark the 20th season of the MusicNOW contemporary music series. 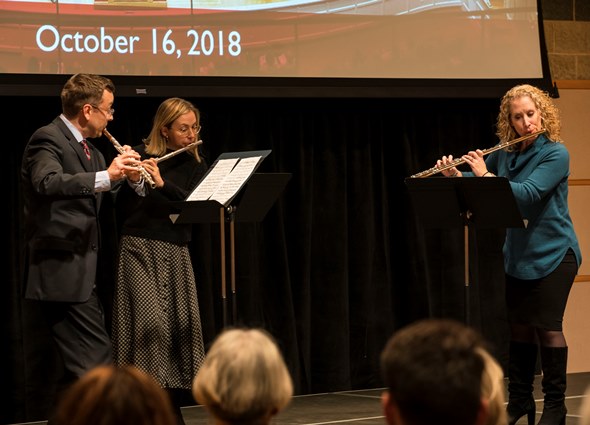 Flutists from the Chicago Symphony Orchestra entertained board members at the annual meeting. (Todd Rosenberg photo)

The CSO’s Latino Alliance marked its sixth year, growing its membership by 24 percent to 343 active members, and the African American Network reached a total membership of more than 1,800 individuals in its second year. Audiences beyond Chicago accessed the programs of the CSO through radio broadcasts, recordings, tours and online platforms.

The number of CSOA-produced videos also increased last season, expanding to more than 100. These included new Video Program Notes for virtually all of the CSO’s 32 subscription programs, customized promotional videos for CSO and SCP concert programs and original interview content with CSO musicians, as well as CSO and SCP guest artists.

Revenue from the CSO’s annual three-concert series at Wheaton College grew by 12 percent to $308,000 and attracted 1,402 subscribers representing an 4 percent increase from the previous season. The series also included a sold-out performance on March 16 led by Muti. More than 347,000 tickets were sold for 219 ticketed concerts.

The CSO Main series subscription renewal rate in FY18 was 86 percent, one of the highest rates for a major U.S. orchestra.

Approximately 437,000 people attended CSOA performances and presentations at Symphony Center and in other venues in the greater Chicago area last season including Edman Memorial Chapel at Wheaton College and St. Sabina Church. There were 224 free events that included CSO open rehearsals for students, seniors and community groups; All-Access chamber music concerts at Symphony Center and in three venues on Chicago’s South Side; Chicago Youth in Music Festival events; partnership events with Chicago Public Schools; and programs for at-risk and incarcerated youth as well as the annual free CSO Community Concert at Lane Tech High School in Chicago’s Roscoe Village neighborhood; Civic Orchestra of Chicago performances and chamber music performances by CSO and Civic musicians in neighborhoods across the city.

General operating support to the CSO was $24.5 million. This total included approximately $17.3 million in gifts from individuals, more than $4.6 million from corporate sponsorships and partnerships, more than $2 million in grants from foundations and government agencies, and $500,000 from unrestricted bequests in direct support of the CSO’s operations.

Operating expenses totaled $73.7 million, resulting in an operating deficit of $0.9 million, an improvement of more than $0.5 million over fiscal year 2017.

The value of endowment investments increased to $303 million.

Total assets at year-end were $508.8 million, and net assets were $291.2 million, continuing to provide the foundation for artistic excellence, audience development and engagement and education initiatives.

Seventeen Trustees were re-elected to additional 3-year terms, and 43 new Governing Members were installed. Special acknowledgement was given to 30 individuals who have served on the CSOA Board of Trustees for 30 years or more.

A moment of silence was observed for those trustees who passed away during the 2017/18 season: Cherif Bassiouni and Richard L. Gray.