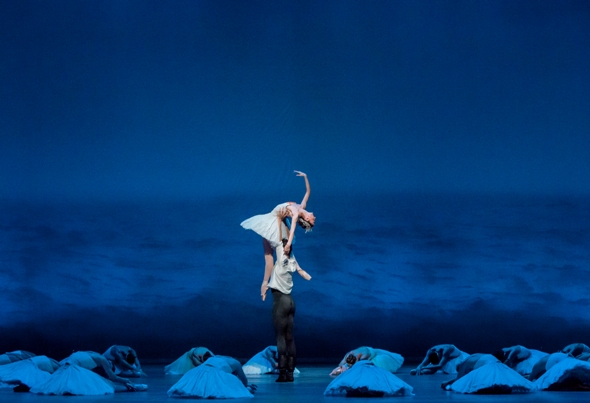 Preview: World premiere of ‘Anna Karenina’ joins remounts of ‘Swan Lake’ and ‘The Nutcracker’ in follow-up to record-breaking year.

As the Joffrey Ballet enters its 2018-2019 season, it is in top form both artistically and financially.

Not only did it emerge from the past season with record-breaking audience attendance of more than 100,000, but box office receipts also surpassed $7.7 million. In addition, the company recently received a $1 million grant from the Alphawood Foundation for a three-year project aimed at “audience expansion and sustainability,” and a gift of $750,000 over three years from the Lakonishok Family that has enabled it to add three new company dancer positions to its roster, as well as two additional paid work weeks to the contracts of all Joffrey artists.

Best of all, the company has three major full-length works scheduled for this season at the Auditorium Theatre: a remount of Christopher Wheeldon’s ingenious version of “Swan Lake,” a major hit for the company when it was when it was produced here four years ago; Wheeldon’s Chicago-oriented reinvention of “The Nutcracker,” now in its third season; and the world premiere of Yuri Possokhov’s “Anna Karenina.” In addition, the season will conclude with an audacious mixed bill under the umbrella title  of “Across the Pond,” featuring works by three contemporary British choreographers. 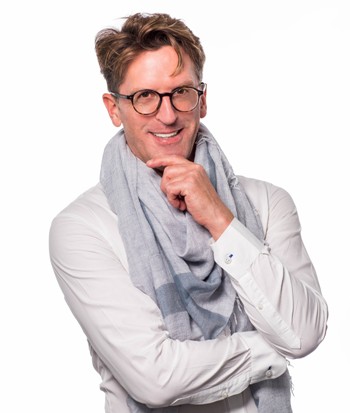 “We have become very aware of the audience’s need for narrative,” said Ashley Wheater, who has made enormous innovations since becoming the Joffrey’s artistic director in 2007. “We know that if we open our season with a full-length story ballet, it will create a driving momentum for the rest of the season, carrying us into ‘The Nutcracker’ and then on to our later program of contemporary works, which is usually in our winter spot but which this time, for scheduling reasons, will be in the spring.

“The world loves great storytelling. Just think about how many novels are being read by people around the world every day. And there is a reason for this. Great stories can help us understand who we are and can introduce us to other cultures. They are profound reflections of our humanity. Yet at the same time, I disagree with those who think contemporary dance is non-narrative. Just look, for example, at George Balanchine’s plotless ballets and you realize they are very much about the relationships among people.”

Wheeldon has created both abstract and full-length ballets, and in recent years has turned his attention to Broadway, where he directed and choreographed the Gershwin-scored musical “An American in Paris” and is now at work on a new musical about Michael Jackson (set to open in New York in 2020, with rumors of a Chicago tryout). He initially choreographed his version of “Swan Lake” for the Pennsylvania Ballet, where it debuted in 2004.

“Chris [Wheeldon] was inspired by the fact that at the very same time Tchaikovsky was in Russia writing his score for ‘Swan Lake,’ the great French Impressionist Edgar Degas – the most famous painter of the ballet world – was drawing the dancers of the Paris Opera Ballet,” said Wheater. “And at the same time, Toulouse-Lautrec was also capturing the performers in the city’s nightclubs and theaters. Chris also learned that the wealthy male patrons of the ballet, called ‘abonnes’ (French term for “subscribers”) expected something more than tickets; they wanted to be able to take the girls out after the performance. And like Rothbart, the evil figure in the original ballet, the Patron in his ballet has significant power over the girls.” 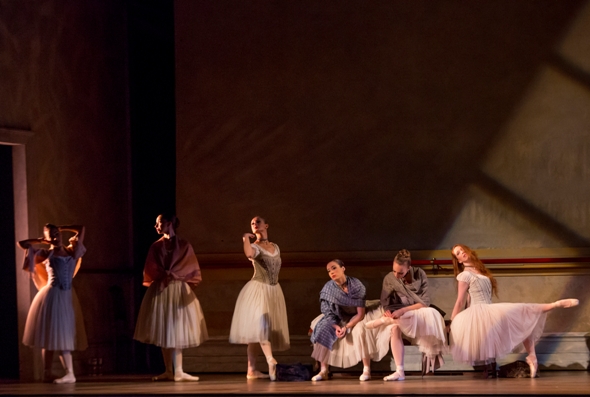 In Wheeldon’s “Swan Lake,” a ballet-within-a-ballet, the girls backstage are under an evil thumb.

The ballet begins in a studio at the Paris Opera where “Swan Lake” is soon to open; so in a sense Wheeldon’s production is a ballet-within-a-ballet, with many details of the story revealed in the opening scene as the Patron watches a final rehearsal. We learn that the principal male dancer, who is in love with his beautiful partner, feels threatened by this man’s hold over her, and we watch as he begins to waver between his fantasies and reality. The ballet’s third act takes the form of an elaborate fundraiser for this new work, and this is when the Toulouse-Lautrec influence takes hold. But Wheeldon also has retained the iconic elements of the original 18th-century Moscow production with its choreography by Lev Ivanov and Marius Petipa.

A number of years ago, when Wheater decided the company needed a new “Nutcracker” to replace the time-worn but much-loved version created in 1987 by Robert Joffrey (with help from Gerald Arpino and others), he knew he wanted it to have a strong Chicago twist, just as Joffrey’s version was the first to give the European story a vintage American backdrop. He also wanted the story, with its Tchaikovsky score, to suggest Christmas as it might be celebrated by a financially struggling working class family rather than, as he put it, “a wealthy family in which everyone already had plenty of everything.” 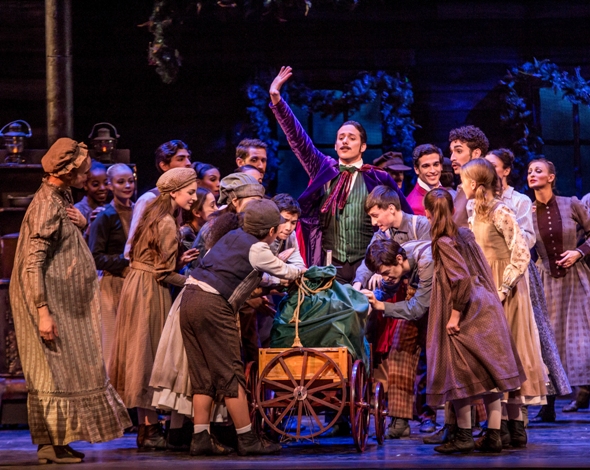 Wheater hit upon the idea of setting the story just as the construction of the groundbreaking 1893 World’s Fair (Columbian Exposition) of Chicago was underway. He tapped Wheeldon to choreograph, and they gathered a creative team that included children’s book author Brian Selznick as librettist, designer Julian Crouch, puppeteer Basil Twist, lighting designer Natasha Katz and projection designer Benjamin Pearcy.

As Wheater explained: “The family in this story was now the single mother of a daughter, Marie, and a son – an Eastern European immigrant artist who was working on the famous statue for the Fair. And instead of Drosselmeyer, the magician godfather of the children in the original, there was now the Impresario, a figure inspired by Daniel Burnham, the architect and urban designer who planned the Fair. In another change, Marie’s dream takes a different form. What she really wants is for her mother and the Impresario to fall in love and create a complete family.” 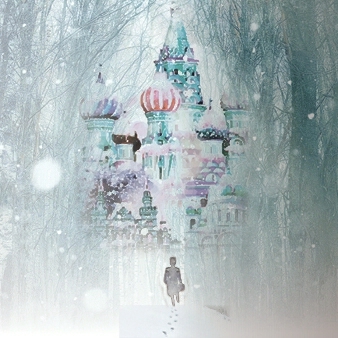 From “The Nutcracker” it will be on to the debut of Possokhov’s “Anna Karenina,” based on Leo Tolstoy’s 1878 masterpiece set in the world of the Russian Imperial era. The novel, which unfolds through more more than 800 pages and eight parts, chronicles the tragic consequences of an extramarital affair between Countess Anna (a socialite married to Karenin, a statesman 20 years her senior), and her lover, Count Vronsky, the wealthy and seductive cavalry officer. It also tells the corresponding story of the courtship between the shy, passionate Levin, a young landowner, and Kitty, a princess.

“Yuri and I had talked about a ballet based on ‘Anna Karenina’ for many years,” said Wheater, who shared a dressing room with Possokhov when he and the former Bolshoi Ballet dancer were both members of the San Francisco Ballet.

“We talked about using an existing score, possibly music by Scriabin. But then Yuri worked with a brilliant young Russian composer, Ilya Demutsky. He wrote the music for Yuri’s ballet, ‘A Hero of Our Time’ (based on another 19th-century Russian novel), as well as for his ballet about the life of Rudolf Nureyev (which debuted at the Bolshoi Theatre last year – see an excerpt below – in the wake of much controversy). Demutsky also wrote a one-act opera protesting the imprisonment of members of Pussy Riot (the notorious punk rock group from Belarus). His score for ‘Anna,’ which has a great romantic sweep, has turned out to be well worth waiting for.”

Possokhov worked with a Russian theater director in order to bring Tolstoy’s story down to a manageable size. Said Wheater: “The primary goal was to focus in on the issue of honoring the line of a relationship. Do you stay true to a marriage, or do you sever that marriage for a new love? Either way there is a great price to be paid for overstepping those lines in life. And while this ballet, which is still in the creation process, is true to the period of the novel in terms of costumes and manners, it also has a contemporary feel, with projection-video design by Finn Ross of ‘The Curious Incident of the Dog in the Night-Time’ fame.”

So what about all the acting demands that come with these dramatic ballets?

“The company has learned so much about that from working on earlier projects with both Christopher and Yuri, as well as with such choreographers as Annabelle Lopez Ochoa, John Neumeier and Alexander Ekman (whose surreal Swedish ballet, “Midsummer Night’s Dream,” which wowed audiences last season, even required the dancers to speak). They understand very well that the steps are only worth something when they have something to say, and that there is a whole other side to learning their roles. A few have even begun taking acting lessons.” 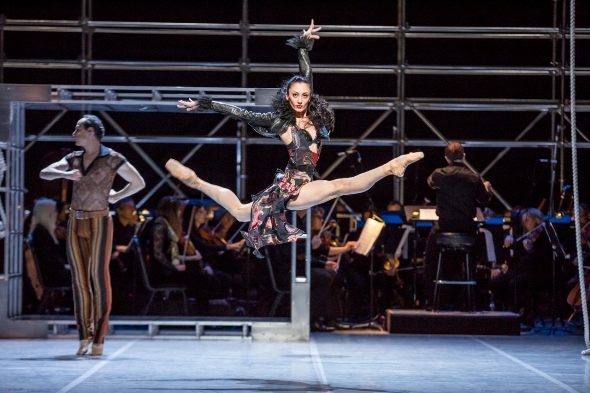 Story ballets set by Possokhov and previously performed by the Joffrey include “The Miraculous Mandarin” (pictured here) and “Don Quixote.” 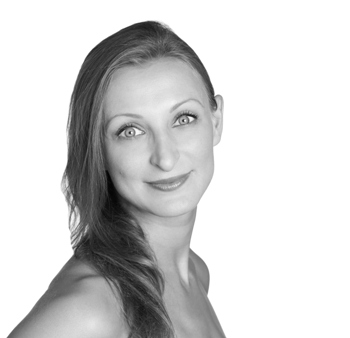 Wozniak: “Have a purpose behind what you’re dancing.”

Joanna Wozniak, who has been a member of the Joffrey company since 2003, has often demonstrated her acting skills in character roles as well as leads.

“I’ve never studied acting but I guess I would have gone the method-acting route,” said Wozniak, laughing. “The important thing is to always have a purpose behind what you’re dancing. I remember one of the things Christopher [Wheeldon] stressed when we first did ‘Swan Lake’ was that the dancer playing the Prince had to move between what was real and what was imagined – a very tricky thing to suggest.”

Suzanne Lopez, who danced with the Joffrey both in New York and Chicago, and who, since 2016, has served as one of the company’s three all-important ballet masters (who stage and rehearse the full rep), finds the differences in choreographers’ creative processes particularly interesting.

“With ‘Nutcracker, Chris reminded the dancers that although audiences were largely familiar with the story, he was telling it in a different way,” said Lopez. “And that required them to be very clear about the characters’ relationships, while also being nuanced.” 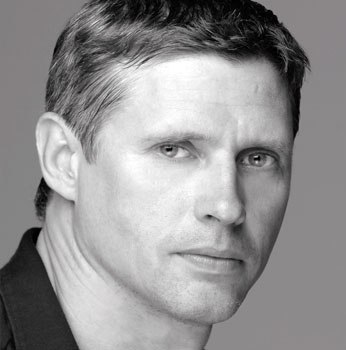 “For Yuri, who is Russian, and has Tolstoy in his blood in a way most of us do not, the important thing is to be true to the text and the period style. For example, at one rehearsal, for a salon scene, he explained the whole world of salons as they existed in the high society of St. Petersburg in the 19th century. He said they were the places where secrets were exchanged, but never in a gossipy way. You would never stare at a person; a glance could communicate everything.”

After all the long-form storytelling, the final program of the Joffrey season, “Across the Pond,” will provide a change of pace. It will feature “Vespertine,” a 2013 work created for the Norwegian National Ballet by Liam Scarlett, resident choreographer of Britain’s Royal Ballet, set to the music of Baroque master Angelico Corelli and others. And there will be two world premieres: one by choreographer Andrea Walker (who puts a twist on hip-hop) and another by Andrew McNichol, who, according to Wheater, is thinking about a work inspired by the “Dreamers,” the undocumented immigrants brought to the U.S. as children.