‘Support Group for Men’ at Goodman: 4 guys, make it 5, couple of cops and a ‘talking stick’ 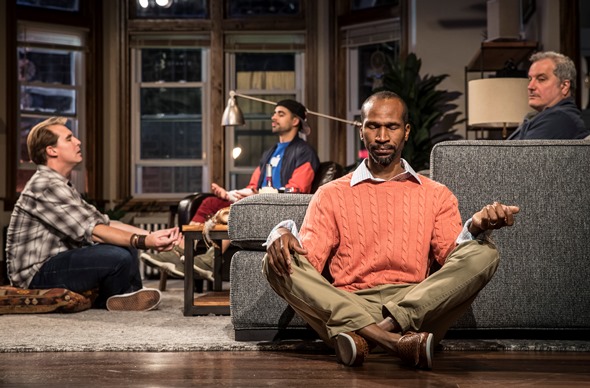 Review: “Support Group for Men” by Ellen Fairey, at Goodman Theatre through July 29. ★★★★

The first flourish of Ellen Fairey’s play “Support Group for Men,” now on display at Goodman Theatre, works twofold narrative magic: It creates a deceptively rich context, and it’s just plain deceptive. We think we’re in for a night with the boys as sitcom when the truth is we’re in for a theatrical ride as clever as it is gentle and poignant and authentic. 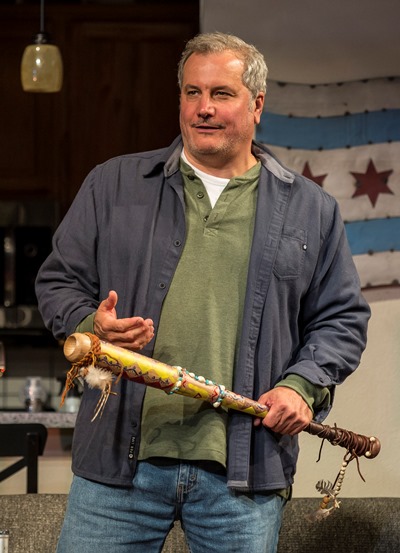 Every Thursday night, a motley foursome of friends meets at the apartment of one of them in Wrigleyville on Chicago’s north side. It’s a venting session, sort of like group therapy but without the expert presence of a psychiatrist. Yet it isn’t just a complaining free-for-all. There is an organizational rule: When one of the guys has the “talking stick” – a baseball bat adorned with Native American symbols and feathers – everybody else listens, without comment or criticism, until the speaker cedes the stick.

To further objectify the proceedings, each participant chooses a Native American-sounding name for his turn with the stick, and everyone else honors him by repeating the name in chorus. The topics are the usual, which is to say mostly variations on the theme of spouses and girlfriends: We don’t talk anymore, we haven’t had sex in a month. But the makeup of the group means perspectives range widely.

Brian, the apartment owner (played by Ryan Kitley), is a youthful 51 in a perfect relationship with a woman 20 years his junior. It’s all good. It’s amazing. Kevin (Tommy Rivera-Vega) is a twentysomething Latino who can go either way sexually (he’s just a human being who loves human beings) and has a way of running his mouth. Delano (Anthony Irons) is black and harbors some resentment about being viewed by Brian as his “black friend.” Delano also has issues with his wife. 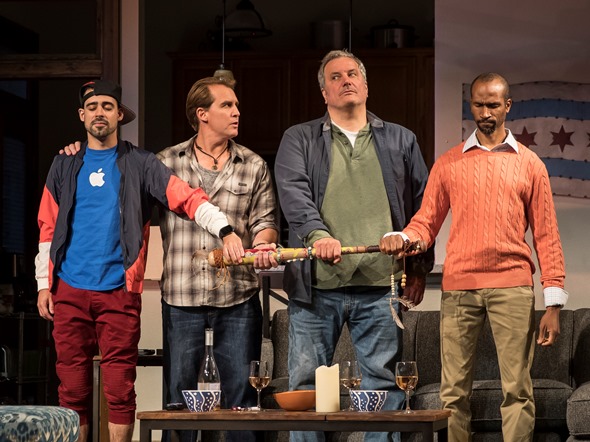 The fourth guy is the X-factor, the oldest, the clueless one, the odd man out and (minor spoiler alert!) the actual protagonist. That’s not spilling very much. You can see it right away: In the instantly disarming performance by Keith Kupferer, bull-framed, rough-cut, straight-talking Roger, a vulnerable soul in spite of himself, commands our attention and our sympathy. He’s old school, meaning he’s still trying to figure out his answering machine and cannot comprehend boys who dress like girls, never mind people whose sexuality is, well, fluid. 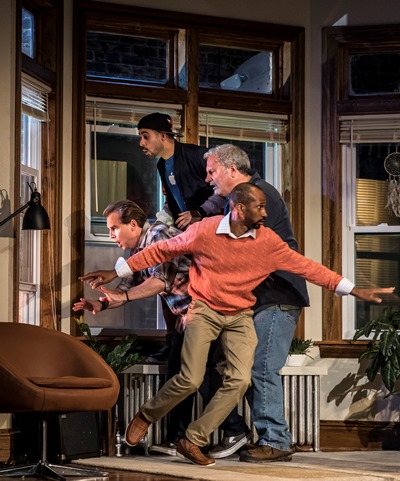 Roger has a novel job: He polishes the Bean in Millennium Park. OK, it’s really called Cloud Gate; but, observes Roger, if the artist didn’t want it to be called the Bean, why did he make it look exactly like a bean? That’s Roger, in a nutshell. Roger also doesn’t take any, uh, thing from anybody. (I’ll have to get through this part without quoting him.) So when some rowdies on the street outside a bar three floors below create a racket, Roger opens the window and orders them to shut the…to quiet down. And then he empties a bag of chopped vegetables (his term) on them.

Kupferer is a raw but very real pleasure to watch. I might say an ox in china shop except that it seems safe to surmise Roger has never been inside a china shop. He has worked 50 stories above the ground on construction sites, however. But that’s his story to tell, and I won’t go there. It’s an important story, though. It contains the gist of why Roger is part of this group. And it takes a man in heart and mind to own up to it.

All that comes to pass eventually, after the narrative takes a stunning turn, the group grows a bit and playwright Fairey’s real grasp of dialogue, dramatic tension and human frailty comes sharply into focus. 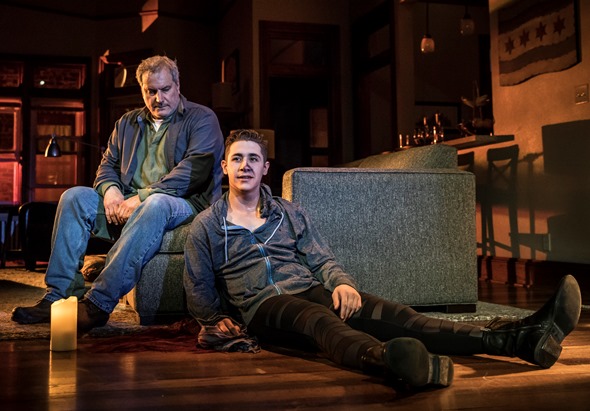 “Support Group for Men” is a smart play, directed – I’m inclined to say conducted – by one of Chicago’s best, Kimberly Senior, whose unfailing ear for psychological nuance tells in this production’s menu of pace and space. (The visual space is the distinctively Chicago apartment designed by Jack Magaw.)

There’s a musketeers tightness in the spirit and energy of the four actors who take their turns with the talking stick. Then two Chicago cops (Sadieh Rifai and Eric Slater) make it a sterling sextet; they’re in, they’re out, they’re back. There’s also a big surprise, yet another character, in a deliciously direct and appealing turn by Jeff Kurysz that nearly steals the show even from Kupferer.

The whole enterprise ratchets up several notches when Kurysz enters the picture. So you ask, who was that masked man? Forget about it. All I’m saying is, I loved the sexy red wig. So did the guys. All of ’em. Not least Roger.