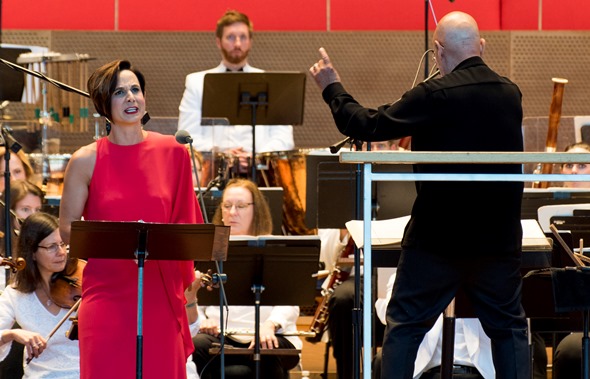 The rewards just keep coming at this summer’s Grant Park Music Festival. After a splendid opening stint of concerts, artistic director Carlos Kalmar gave place to conductor Dennis Russell Davies on July 6, and the result was yet another stellar program – this one offering an 80th birthday tribute to composer William Bolcom with his Fourth Symphony as well as a potently dramatic take on Tchaikovsky’s Fifth Symphony. 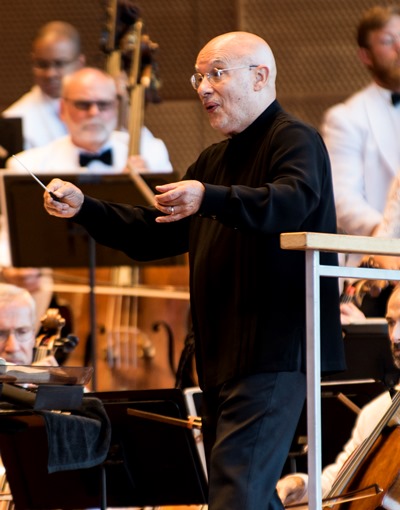 Bolcom and the Grant Park festival go way back to a 1986 performance of his massive oratorio “Songs of Innocence and of Experience,” based on the poetry of William Blake. Hard to believe that momentous event took place more than three deaces ago. I still remember it vividly. Surely Bolcom’s masterwork, “Songs of Innocence” well might have captured the Pulitzer Prize, though that award did ultimately come to Bolcom in 1988 for his Etudes for Piano.

The composer also has enjoyed a long association with Dennis Russell Davies, who conducted all three of Bolcom’s premieres at the Lyric Opera of Chicago. Davies cheerfully needled his old friend a bit at the Grant Park concert: Microphone in hand, he wanted to acknowledge Bolcom at the start of the program’s second half but couldn’t locate him in the seated throng. Finally he spotted Bolcom and his wife Joan Morris headed down the aisle toward their seats. “Ah, there he is,” Davies exclaimed, “making an entrance.”

If “Songs of Innocence” (1984) warranted a Pulitzer, the selection committee missed a second chance to honor Bolcom when it passed over his Symphony No. 4 (“The Rose”) two years later. The 36-minute work falls into two large movements, the first a purely orchestral evocation of the wildness of the American Northwest and the second a consummately lyrical setting for mezzo-soprano of Theodore Roethke’s poem “The Rose.” 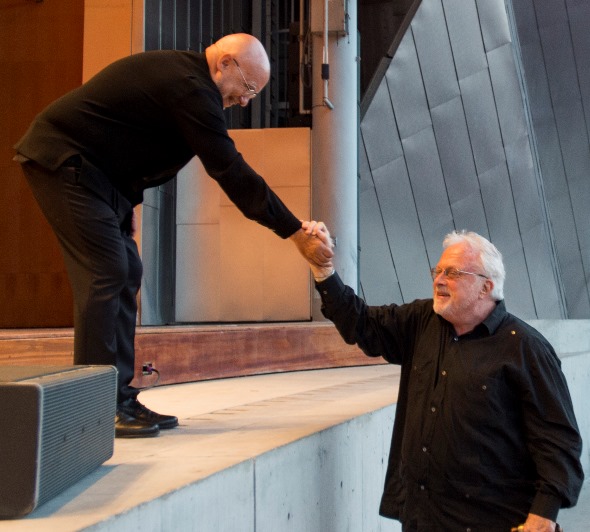 One might think of Bolcom’s exquisite treatment of Roethke’s verse, which conjures the spiritual commingling of nature with human sensibility, in contradistinction to “Der Abschied,” the final movement and seeming earthly leave-taking of Mahler’s “Das Lied von der Erde.” Rather than the serene resignation of Mahler’s work (drawing on ancient Chinese poetry), the Roethke-Bolcom “Rose” engages life in all its vitality, mystery, interconnections and sublimity. It is music, and poetry, of revelation and recognition and ultimate positivism. 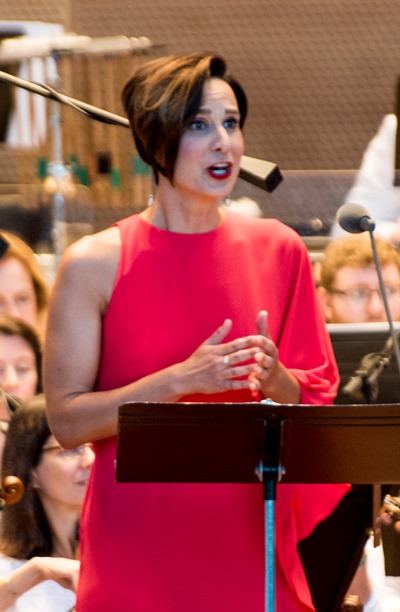 Mezzo-soprano Kelley O’Connor gave a profoundly impressive account of the text, not only in the beauty of her voicing but also in the deep understanding she brought to the text syllable for syllable. It was nothing less than an accomplished poetry reading heightened by music. The Festival Orchestra under Davies likewise captured both the fraught, virtuosic naturalism of the opening movement and the caressing quality that frames the solo voice throughout the symphony’s extended latter part.

In something of a programmed encore, Davies topped off the Fourth Symphony with the finale from Bolcom’s Fifth – a headlong, motoric surge of music titled “Machine.”

The concert’s first half paid its own generous dividends in a performance of Tchaikovsky’s Fifth Symphony that cast the work in dramatic half-light, connecting it most unusually – but also unequivocally — to the the composer’s next, and last, symphony, the “Pathétique.” Where most performances accentuate the Fifth Symphony’s elegance, its fluidity and its transparent textures, Davies went for a deliberately paced narrative spun out in shadows, portentous bordering on tragic. And it was quite convincing, as beautifully played as it was carefully drawn.