‘Damascus’ at Strawdog: A frantic white kid and a Somali-born taxi driver, both desperate 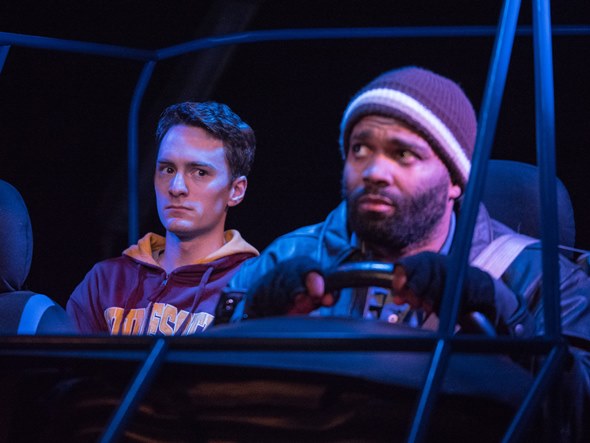 In your face is probably not the right way to describe the close-up experience of watching Bennett Fisher’s taut, harrowing play “Damascus” in Strawdog Theatre’s cozy new home. Eye to unblinking eye would be more accurate.

As Somali-born Hassan drives his van down the highway from the Minneapolis airport toward Chicago, with a mysterious young white man as his passenger, news of a terrorist attack back at the airport comes over the radio. We viewers gaze straight at the two men through the van’s windshield. The increasingly anxious travelers stare right back at us. 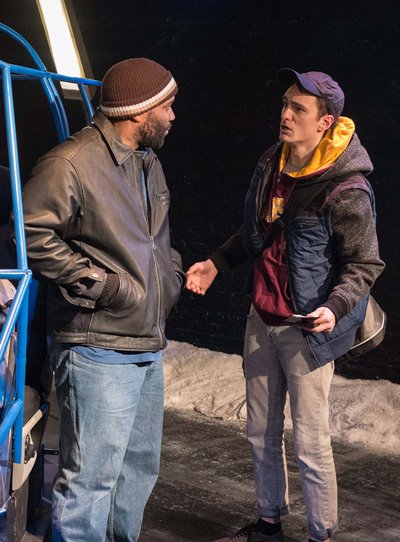 We quickly get the sense this could end badly for one of these guys, maybe both. Hassan has that suspect profile: a black man, a Muslim, perhaps eight or 10 years older than his passenger, born in a tumultuous part of the world, hurtling down the highway beyond the prescribed limits of his taxi license. The skinny white kid, called Lloyd, makes it clear he’s on a mission; he progresses from the back seat to the front, and from solicitous to fretful to threatening.

The wild ride that is “Damascus” begins with a snapshot of the hard conditions facing Hassan (Terence Sims in a richly textured, credible and sympathetic performance). The multifarious costs associated with operating his own taxi – vehicle lease, airport fees, taxes, fuel – have put him behind the eight ball. And too far behind in his rent. He sleeps in the van.

Along comes this kid Lloyd, who might be 20 years old but could be younger. He’s desperate to get to a little town in California where his mother is dying. That means catching a plane at O’Hare in Chicago. Could Hassan run him down there?

The answer, in a word, is no. That’s outside Hassan’s legal conveyance range. Lloyd (played with maniacal, really scary conviction by Sam Hubbard) pleads. Hassan is adamant. Lloyd flashes a wad of cash and begs. Hassan studies the cash, surveys his sleeping quarters, and gives in. Off they go. All that follows is kept on fine edge by director Cody Estle. 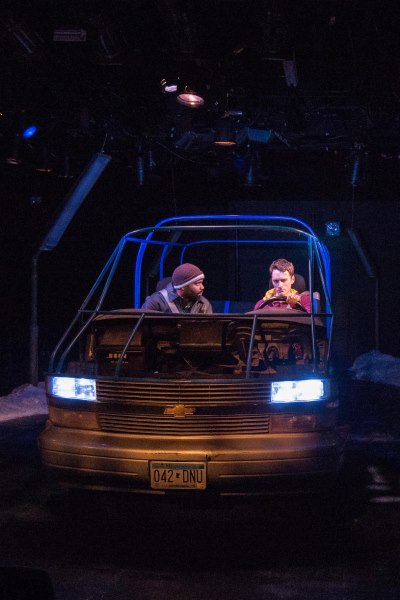 Hassan’s van is a piece of work worth pausing over. The ingenious creation of Jeffrey Kmiec, it’s essentially a blue van-shaped tubular skeleton over an actual van chassis, with front and back seats, a steering wheel, an engine compartment (with no engine) and a rear storage area – all mounted on a base that can be rotated to afford changes in perspective for the audience.

But mainly, the van sits perpendicular to the audience, its two occupants eyeball to eyeball with the viewers. Thus the dialogue between Hassan and his obsessive passenger is heightened, even transcended, by clearly visible facial gestures. The modulating looks on those two faces add volumes between the lines.

The explosion at the airport, which has taken the lives of four people, becomes the central topic of conversation between Hassan and Lloyd. I’m not spoiling anything by revealing that Hassan had nothing to do with it. That’s evident in the first minutes of the play. He’s just a hard-pressed man doing his best to keep body and soul together. But Lloyd observes that Hassan looks like someone who might have set off the blast. 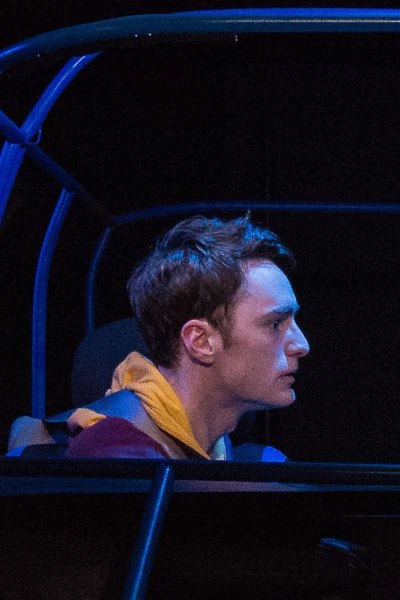 In short order, the two men are wrangling over politics – world order, oppression, exploitation, delusion, the need for action, and its reward. So animated and earnest – no, zealous – is Hubbard’s soap-box preaching, and so close are we to the fire in his eyes, that we can easily forget that an actor is playing before us. We readily behold Lloyd through the lens of Sims’ initially mystified, then profoundly alarmed Hassan. This is one crazy kid – who dwells in a world made somehow rational in his own mind.

Lloyd, who insists that he drive for a while, flashes in and out of what the rest of us might call rationality. In one of his less heated moments, he thoughtfully points out to Hassan – albeit with edged irony – that Damascus is just ahead. (It’s west of Rockford, Ill.) Their relationship proves to be, let’s say, volatile.

When their journey ends a bit sooner than expected, and Lloyd is airborne, Hassan finally can reflect on events of the night. He meets an Illinois state trooper (the delightfully laconic, matter-of-fact Eleni Pappageorge, who fills several small roles) and ponders the continuing life of a struggling taxi van driver.