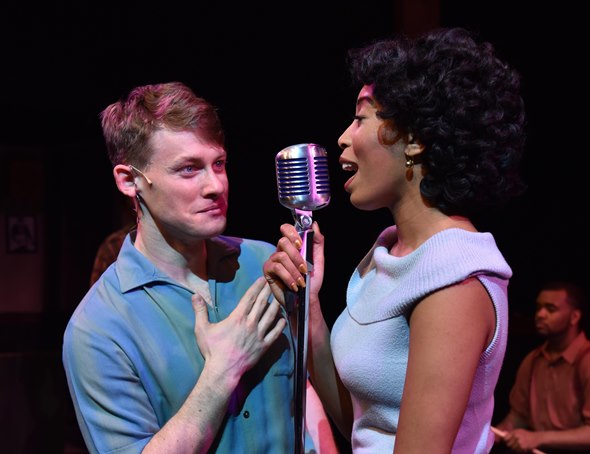 By now I have seen the gritty and electrifying musical “Memphis” – about the pre-dawn of rock ‘n’ roll, the modulation of black music into the white mainstream in the early 1950s – in three different stagings: the original Broadway production, the national tour and the current version mounted by Porchlight Music Theatre in its new home at the Ruth Page Center for the Arts. This one feels, breathes, rips like the “Memphis” I’ve been waiting for.

It’s not so much that Porchlight’s version is a better show than the others, though the combination of Daryl Brooks’ stylish direction and a first-rate cast would be hard to beat anywhere. What set this experience apart for me was the intimate venue. The cozy Ruth Page theater all but removes the fourth wall to spill joy and madness, comedy and conflict right into your lap. I loved every minute of it. I also admit it felt like I was revisiting the cradle of my youth. 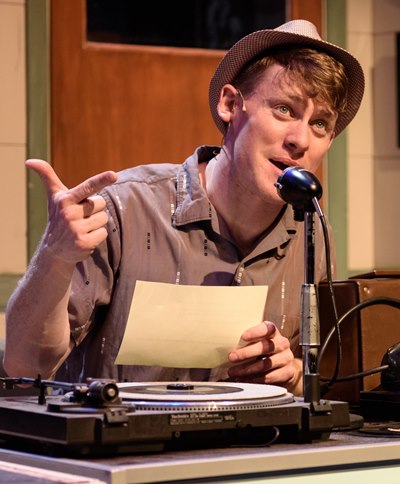 I’m not from Memphis, but I’m from that era. The delirious love story at the heart of this show has always struck me as a private prelude to the epochal event, neither seen nor even intimated here but invisibly stamped, like a watermark of authenticity: the advent of Elvis Presley.

Unlike Elvis, the young white guy at the center of this story, Huey Calhoun, is not a performer. But exactly like Elvis, Huey loves the fabulous music that emanates from Beal Street on the black side of segregated Memphis.

He’s seriously wacko about it. This music whose pulse and lyrics exude life feels to Huey like the other side of the universe from the safe stuff that passes for music in white Memphis – “How Much Is That Doggy in the Window?” and anything sung by Perry Como.

One night Huey (the magically loopy and irrepressible Liam Quealy) crashes a black club, which brings the music to a screeching stop. Huey’s impulsive action – impulse is his life’s road map – instantly expands his consuming affection: He’s smitten by the club’s pretty featured singer, Felicia Farrell (the radiant and very accomplished Aeriel Williams). Though her bear-size brother Delray (Lorenzo Rush, Jr.) takes an immediate disliking to this white interloper, Huey convinces them all that he’s only there to absorb this great music at the source. 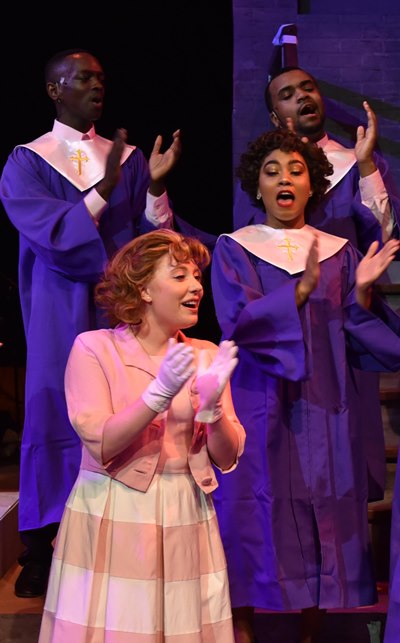 Meanwhile, Huey has followed another urge and crashed another scene – a radio station where the idea of playing “race” music, as black music was called by white people at the time, was unthinkable. Headlong Huey locks himself in the DJ booth and begins spinning black records. The phones start clamoring, not with complaints but with white kids calling for more, more, more. Huey’s star rises; and when he puts Felicia on the air to sing, her celebrity spreads, too.

But all this is happening nearly 70 years ago. Though the music begins to take hold, there is no place in Memphis society for the union of a white man and black woman. In fact, there’s a law against it. Even Huey’s mother (Nancy Wagner) disapproves.

Felicia tells Huey they should relocate to the North, maybe to New York, where they could live together openly. Huey won’t hear of it: By now he practically owns Memphis; His radio show is No. 1. Anyone can see that the rules will bend for him. Then some guys with baseball bats show him just how wrong he is.

The chemistry between Williams’ genuinely talented Felicia and Quealy’s hyper-energized, perpetually careening Huey is warmly convincing. Even his resistant mother can see that these two love one another. Felicia just wants to do the practical thing to make it work. But practicality isn’t in Huey’s lexicon. He’s a train wreck plunging toward inevitability. And Quealy is almost scary in Huey’s maniacal pursuit of whatever occurs to him next. 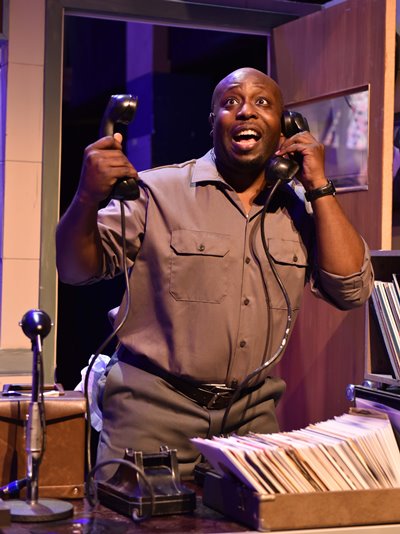 He believes the world has always perceived him as a born loser, but now he has surprised them all – and himself – by soaring to No. 1 in Memphis and making this beautiful girl his own. But Huey’s demons never let up, so he never lets up. Impulse by outrageous impulse, he finally makes the colossal mess he seems unconsciously to wish for.

“Memphis” is a tight, fast-paced show carried by crisp, purposeful dialogue. David Bryan’s high-powered musical score, rooted in gospel and soul, won three Tony Awards in 2010 for best score and lyrics, best orchestration and best musical. Porchlight’s production boasts a solid supporting cast led by James Earl Jones II’s smooth, funky and funny Bobby, a janitor who turns out to be a groovy dancer and spunky comedian. And Jacob Voight fills the bill as the long-suffering radio station owner who grudgingly allows Huey to launch his little operation over the moon.

The choir of a black church – where to everyone’s amazement a white girl shows up, inspired by Huey’s radio record play – is terrific, and so is a silky-smooth trio of men. Like Bill Morey’s costumes, the sets by Jacqueline Penrod and Richard Penrod nail the early ‘50s. “Memphis” is great mad fun, but it’s also catastrophic and in that light deeply poignant.